The key to Badiou's "I'll train those two!" line in Film Socialisme may lie in his description of Brechtian didacticism in the opening essay of his 1998 Petit manuel d'inesthetique, which also contains an essay on cinema: "The thesis (of the didactic schema) is that art is incapable of truth, or that all truth is external to art.. The definition of art, and of art alone: To be the charm of the semblance of truth...

"For (the didactic) Brecht, there exists a general and extrinsic truth, a truth the character of which is scientific.. dialectical materialism, whose status as the solid base of the new rationality Brecht never cast into doubt. This truth is essentially philosophical, and the 'philosopher' is the leading character in Brecht's didactic dialogues.. 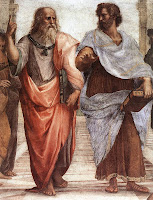 The other two schemata are romanticism, which Badiou equates with Heideggerian hermeneutics, and psychoanalysis, aligned with the classicist, Aristotelian emotional catharsis in contrast to Brecht's Platonism.  He complains that the avant-gardes couldn't unite the first two against the third, citing Marinetti and Breton, in the long tradition of convoluted logic by Frenchmen to complain about Breton's aesthetics which includes, vying with Camus for the most deceptive tract, that of Henri Lefebvre's in Critique of Everyday Life.  Lefebvre, to his credit, said in a 1955 lecture on Lukács "the subversive antibourgeous character of Romanticism acts as a screen between classicism and ourselves. For my part, I do not share Lukács' radical suspicion of Romanticism," pointing out, as would countless other examples and testimonies, that there are many more sides to Romanticism other than Badiou's definition, which is no doubt a strain within the tradition. Breton called Surrealism "the prehensile tail of romanticism."  Anna Balakian wrote "Breton notes.. that.. Hegel succeeded in pointing out the very true differences between romanticism and modernism: the romantic draws the object within itself and makes an abstraction of it, while the true modern projects himself into the concrete existence of the object."  To gauge amongst other things, the treatment of the Aristotelian in Aragon's Le Paysan de Paris and Breton's Nadja, "the measuring stick is knowledge of concrete forms and objects, and the mind's elasticity in transforming them."  Breton sought out Freud in person and Aragon would emerge as a conventional master of Aristotelian-structured novels after WW2. We find below Godard, too, succumbing to the non-Brechtian "Oh! how many imagine the Bérénice, the Phèdre of their dreams, leaving the trace of her tears on her screen." (below, spoon purchased in L'Amour Fou by Breton at Saint-Ouen Market in the presence of Giacometti)

Brecht's first play, Baal* (noted here in keeping with the Minotaur theme, I, II) commented on the Romanticism that animated the previous era's fashion for Expressionism, which Douglas Kellner thinks "we must see.. as a late development of romantic anti-capitalist revolts."

Bentley: "Walter Sokol has written of (Baal) eloquently as a parody of those Expressionist heroes whose life was a sacred mission. But since Brecht considered the Expressionist missions spurious, he makes Baal's 'mission' genuine. Baal is an ambiguous, ambivalent figure: part monster, but partly, too, the martyr of a poetic hedonism. And the positive element is more prominent than the negative because it is Baal's special contribution - his monstrousness he has in common with a monstrous world."

As the "didacticism" Badiou attributes to Brecht wasn't fully formed, the Hitchcockian justice visited on Baal's chaos and destruction is in keeping with Aristotelian conflict: "With the early Brecht, it is as if he were striving to break through to a hedonism as radical as that of Herbert Marcuse and Norman O. Brown. That guilt and anxiety blocked his path may, in one respect have been fortunate: he was a dramatist - conflict was his raw material." 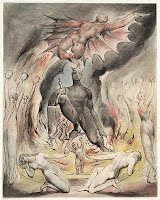 The differing uses of the Baal/ Moloch figure by Brecht and Allen Ginsberg indicate their respective orientations at their starting points.  Ginsberg's was "Moloch whose love is endless oil and stone! Moloch whose soul is electricity and banks!," returning to William Blake who "had attacked the 'Satanic mills' and called for a spiritual rebirth in the face of the material and spiritual decay which industrialization produced." America in the 50's produced "the incomprehensible prison.. Moloch the crossbone soulless jailhouse and Congress of sorrows," against which Ginsberg and his poet friends were protagonists slaying "Moloch who entered my soul early!" Brecht had a picture of Baal over his bed in Augsburg, "the enemy of the Christian-Judaic, puritanic, ascetic tradition.. an enemy of 'all that lacks life and vitality'.. of death." Prefacing his 1926 rewrite, he noted Baal's "heedless way of living.." and that "he shamelessly exploited every possibility that offered." Blake, believed to have been unaware of Hegel, wrote in The Marriage of Heaven and Hell "Without Contraries is no progression" and "Good is the passive that obeys Reason. Evil is the active springing from Energy," long before Bentley would attribute that view to Brecht.

This is a paragraph I took out and forgot to put back but it started in on Badiou's cinema essay, named after Wenders' "Wrong Move" or "False Movement," a loose Goethe adaptation that I've seen a few times and can recommend:

Badiou aggrandizes philosophy, as well as mathematics; Godard aggrandizes cinema. "The (cinema's) allusive quotation" to quote Badiou's False Movement of the Cinema "of the other arts.. wrests these arts away from themselves. What remains is precisely the breached frontier where an idea will have passed, an idea whose visitation the cinema, and it alone, allows... Cinema is an impure art.. parasitic and inconsistent.. it's force lies precisely in turning.. the impurity of every idea into an idea in its own right." (Handbook of Inaesthetics 82-3) Film Socialism is a series of quotes and liftings from the other arts, including Badiou talking about mathematics and philosophy, history, painting, drama.

noticing this truth theme. my sense of time is such lately that I don't know how long ago it was that I took up the same word. it's an odd word, standing for something so broad. the immediate route that suggests itself is to just do away with the word and whatever concept it represents. but one could say that the word doesn't permit that. it could almost be defined as "that which you're not allowed to electively do away with." it presents many options re: scope and context. there could be a truth of a neighborhood association meeting. uhh, maybe. it might not stand for anything like information or reality, but something more like the state of being aimed true. to put it another way, "the charm of the semblance of truth"... that rings true, such that one wants there to be something like truth if only so that something can resemble it. a general and extrinsic truth, tho... I can't begin to imagine what that would represent. I'm seeing the horsehead nebula, not really, because I can't remember what it looks like. don't look a nebula in the mouth, probably. the conditions for a courage of truth... again, the phrase rings true, even if it empties out into something so general as to be only a stand-in for what otherwise can't be said. truth could be an aesthetic thing, and aesthetics a biological thing. the allusion to galileo suggests that truth might be something as grounded as the state of being demonstrable within the context of any system, but that's not saying much about other contexts in which it is presented as something more overarching, often suggested by a usage such as "the true".

The one time celestial formations seemed to me to directly represent truth content is when I first watched Tarkovksy's Solaris, and Berton from the previous mission is showing the video to Kelvin before he embarks, where Berten said he saw the floating 12 foot child and the video shows only clouds and Solaris' ocean (which I can't find online). Part of that shot is the plot element of "see, there's nothing there, what are you hallucinating" but Tarkovsky means for the clouds to match up with the flows of marine biology at the beginning and the end and that the desire for the vision of the child who (it turns out) his father was lost on the mission digs into how we see something like the horseshoe nebula that exists separate from self, loved ones, culture, individuation, sun and drinking water, except that it looks like a fellow animal because we can make out fellow animals. I first saw those clouds and thought, 'that's it?!" as if I was granted a declassification of an extrinsic truth. Tarkovsky said "to be faithful to life, intrinsicly faithful, a work has for me to be at once an exact factual account and a true commuication of feelings" and "art could be said to be a symbol of the universe, being linked with the absolute spiritual truth which is hidden from us in our positivistic, pragmatic activities.. if art carries within it a hieroglyph of absolute truth, this will always be an image of the world, made manifest in the work once and for all time. And if cold, positivistic, scientific cognition of the world is like the ascent of an unending staircase, its artistic counterpoint suggests an endless system of spheres, each one perfect and contained within itself. One may complement or contradict another, but in no circumstances can the cancel each other out.." What I can find is the ending (spoiler) where the microscopic world of Kelvin's shack containing his dad next to the marine biology is transplanted in the ocean he saw in the video.