Jean Cayrol, a poet who died two years ago, is most known as a concentration camp survivor who wrote the screenplay for Alain Resnais’ Night and Fog. His script for Muriel, or the Time of a Return, which I’ve just seen for the first time, is clearly one of the seminal works of film narrative, one of only a handful of films that has stylistic significance to the history of the novel. The pre-production for the film was done at same time as Resnais’ Robbe-Grillet-scripted Last Year in Marienbad, also starring Delphine Seyrig, and as it would have been written in the late 50s it came at a time when Robbe-Grillet had honed his prose style following the release of Jealousy and his much-discussed literary essays.

It is thus interesting to note the Robbe-Grillet influence and its boundaries here. You can see the influence in the dialogue, which like in Jealousy is innocuous, every-day chitchat of bourgeois characters (with the exception of the young, neurotic filmmaker and ex-Algerian-confict soldier Bernard). Clearly since Resnais was working with Robbe-Grillet this influence is likely. But Cayrol has no interest in Robbe-Grillet’s limits: he creates strong, iconic characters with psychological dimensions that are clear but not exaggerated. The use of everyday dialogue, especially that of Seyrig and her reuinted lover Alphonse (Jean-Pierre Kérien), a proud WW2 veteran who exemplifies the dress and manner of middle class café life, is pieced into small narrative fragments in a bounty of jump cuts, like a cubist painting of a man reading a newspaper, similar to Zamyatin’s ‘solar’ style of narrative which reorganized everyday life for symbolic effect.

Unlike the famous dolly shots of Hiroshima, Mon Amour (containing my favorite dolly shot ever) and Marienbad, the camera is always on a tripod and the editing makes movement in time more pronounced than in space. There are no flashbacks - everything happens in sequence, including Bernard’s recollections of Algeria. Deleuze notes that the film exists in an absent present: indeed, the characters don't know who they are or what they are doing (except Jean Champion’s Ernest, who intrudes into a dinner party to sing one of Resnais’ favorite childhood songs and set matters straight), are overcome by events of the past, and must suffer in life (like Cayrol) amid the many who have died.

Cayrol has spent a lifetime on the Blanchot ‘disaster'; here without any filmed footage of Algeria, the atrocities of the war are depicted and have ramifications on the action completely offscreen. With Resnais, who had just gone down this road with Duras in Hiroshima, Mon Amour and whose collaboration with Cayrol (Night and Fog) had previously been suppressed for diplomatic reasons, he is seeking to depict atrocities on a human scale, without the dehumanizing overabundance of carnage that you see in history films or in Hollywood action films. Muriel is a girl who is tortured in Bernard’s presence in Algeria, but we don’t know her, and neither did Bernard, so I speculate Cayrol is trying to replicate this detachment: Bernard’s obsession with the plight of someone he doesn’t know is neurotic in a film of only French middle class characters where he is expected to deal with his own problems and relationships but refuses to. It is notable how few French films deal with Algeria, even those of the patriotic Swiss-born Godard, and it is quite possible that Téchiné’s Changing Times, which has a similar story line of a reunion of elderly lovers involving North Africa and a title which may be taken from a line in Muriel, is a feel-good update of this movie.
Posted by Ian Keenan at 11:32 AM 1 comment: 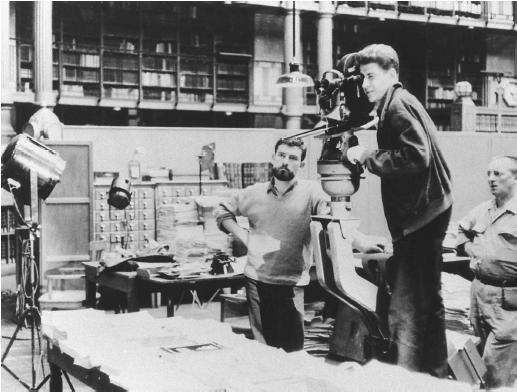 Resnais’ Muriel, or the Time of a Return comes out on DVD tomorrow; I don’t remember whether I ever had the chance to rent it on VHS, tho I don’t think I ever did. This 1963 NY Times review is truly impressive:
"...But that's about as much as I can fathom or tell you is evident in the fantastic display of hodge-podge movements, random details, erratic images and utterly nonsequential cutting that Mr. Resnais has arranged....For it strikes me that Mr. Resnais has here carried intentional elusiveness so far, without any evident justification for it, that he has killed the effectiveness of his film.... I get a feeling that Mr. Resnais is somehow pulling our legs, and I don't find it amusing."
Posted by Ian Keenan at 9:46 PM 1 comment:

More Baudrillard..
Posted by Ian Keenan at 8:49 PM No comments:

A wonderful Shostakovich’s 4th awaits you this Saturday night if you’re near Philly. Charles Dutoit’s tenure as interim skipper of the Philadelphia Orchestra will feature four years of speculation about which young conductor will get the nod to form the orchestra’s identity starting in 2012, and I am already won over by Ingo Metzmacher (pictured), whose cup of coffee this month seems to be going well. One of the reasons I like him, and the reason I suspect he won’t get hired, is this line from the program notes: ‘Metzmacher’s book, Keine Angst vor neuen Tönen, published in German by Rowohlt in 2005, is a plea for pioneering composers such as Ives, Messiaen, Schoenberg, Varèse, Stockhausen, and Cage.’
Today, Leopold Stokowski would never last in the orchestra he made world class. Basically now the Orchestra gets into a tough spot financially and the suits take over, don’t want to make a brave decision and don’t want new music. It’s because of the audience, we hear, though I have never seen more people at the concert hall as when they played Schoenberg’s Gurrelieder.
The strike highlighted the absurdity of the situation: old-timer Wolfgang Sawallich was hired in the early 90s, declaring immediately that ‘Mahler is too noisy,’ which meant any record contracts would have to take the form of some label wanting to put out the gazillionth Brahms’ 1st, and the sought after, groundbreaking recordings from the former Soviet bloc countries could be had for a pittance by the record labels. The musicians loved Wolfgang and his repertory but wondered why EMI ditched them, and went on strike in ‘96 over lower recording bonuses.
What went wrong with Eschenbach is something that those privy to the rehearsals are best to answer to; I’m inclined to think that a clash of musical philosophies doesn’t tell the whole story. As much as he represented to some the modernization of the orchestra, I saw the programming as an insufficient departure from convention, which I tended to associate with Esch though he does braver stuff across the pond. I did see his Mahler’s 6th that everyone talks about and do recommend the CD to those who don’t have the whole Mahler set – there his tendency for tinkering was most vindicated.
Dutoit was the only older conductor with a strong relationship with Philly, and his forte is modernism, which means I get some quality time with my beloved Stravinsky. French standards: Dutoit's rendering of Symphonie Fantastique is worth timing your romantic angst for and you can go deep into the Ravel catalogue, as he does, without finding anything you don’t want to hear. I remember his massive production of Honegger’s Jeanne d'Arc au Bucher, the sort of thing he tends to go out on a limb for, which one would expect me to like on account of my Francophile tendencies but I couldn’t get over the fact that the librettist Paul Claudel had dissed the Surrealists. Dutoit doesn’t strike me, though, as someone who goes out on a limb for anything after 1950, the decade when Stravinsky effusively praised Boulez’ Le marteau sans maître, which changed the face of French music thereafter.
Posted by Ian Keenan at 7:30 PM 1 comment:

Dream journey: Radioactive waste was coming out of a water fountain near the entrance of the park and I surrounded it with plastic chairs so that no one would touch it. Went home and Werner Herzog was on Hollywood Squares, bottom, right hand corner.
Posted by Ian Keenan at 11:05 AM No comments:

More on Baudrillard..
Posted by Ian Keenan at 12:12 PM No comments:

Baudrillard's death. Loss of confidence in his own genius. It is fatal to be an absolute reference. The loss was merely the biological transcription of the other process. The same thing happened to Barthes when he 'allowed himself to die.'

‘Identity is untenable: it is death, since it fails to inscribe its own death..

‘Death is always simultaneously that which awaits us at the system’s term, and the extermination that awaits the system itself. There is only one word to designate the finality of death that is internal to the system, the one that is everywhere inscribed in its operational logic, and the radical counter-finality, ex-scribed from the system as such, but which everywhere haunts it: the same term of death, and only it can manifest itself on either side. This ambiguity can only be seen in the Freudian death instinct. It is not an ambiguity. It simply translates the proximity of realized perfection and the immediate defection of the system..

‘Death should never be interpreted as an actual occurrence in a subject or a body, but rather as a form, possibly a form of social relation, where the determination of the subject and value disappears. The object of reversibility puts an end simultaneously to determinacy and indeterminacy..

‘In truth, there is nothing left to ground ourselves on. All that is left is theoretical violence. Speculation to the death, whose only method is the radicalization of all hypothesis. Even the code and the symbolic are terms of simulation - it must be possible somehow to retire them, one by one, from discourse.’

Johns at NGA: I walked through the Johns at a quick clip, to go stare at the faces of Family of Saltimbanques. Clement Greenberg wrote in the early 60s that Pop Art existed for collectors that couldn’t afford a Pollack and didn’t want a Norman Bluhm, and everything Johns has done from the beginning to the end was repeated ad nauseum throwing conceptual softballs to his buyers. I do like Rauschenberg because he used Pop techniques to find other possibilities.

Rembrandt at NGA: Crowded, I went for the loose drawings from the 1640s. Paris photos: tame Brassaïs, good Atgets, one good Nadar (who I noted once seemed to have decided that the camera was invented for Sarah Bernhardt, the Eiffel Tower and hermaphrodites), one great Dora Maar. Manet’s The Old Musician is a no-show these days, but at least The Tragic Actor (Rouvière as Hamlet) (pictured) isn't upstaged this way. Corcoran: Wall of Courbet - Pissarro - Monet, etc., free til mid-March.

I happened on a Trinidadian take-out joint in Baltimore, the first in the US I’ve ever seen, and on the way back found another one in DC, in Takoma on the corner of New Hampshire and University (Carribean Palace, next to the Starbucks in the huge strip mall). A roti with everything (lentils, spinach, and spuds) puts you down $5, a potato pie $2.20. There’s delicious and then there’s food that makes you think you made a pact with Satan, this is on the high end of the latter. After that there was a nasty accident further North on NH, so I had to turn around and this led me to a Guyanese place and a wonderful Ghanaese market on Riggs just North of University. I was saving the roti for later so I had room for a Guyanese meat pie and their creamy calaloo :)
Posted by Ian Keenan at 11:02 PM No comments:

The good news: In my third figure drawing class, I finally drew a somewhat acceptable foot.
The bad news: It was attached to an arm.
Posted by Ian Keenan at 1:52 PM 4 comments:

Everything that you’re confused about has been covered by a Newsweek Book series from the mid-70s called Great Matters of Confusion for Future Newsweek Readers.
Posted by Ian Keenan at 11:01 AM No comments: