nou
men on
Posted by Ian Keenan at 5:43 PM No comments:

Manuel De Falla wrote El Amor Brujo in 1914 in Madrid after he had lived in Paris from 1907 to the outbreak of war, where friends Debussy and Ravel were drawn to Iberia and he was learning from them how to orchestrate his traditions. He intended his reworkings of Andalusian folks songs to be sung offstage by the sort of mezzos that seem to have finished a shift rolling cigars with Carmen, and this singer I cannot identify fits the bill..

The dramatic tension of the song cycle is really the purgation of love, as the female protagonist is entranced by the spell of the ghost of the unfaithful ex, who before the opening credits of Saura's film version (Piri' Miri Muli' recommended) was bequeathed to her by their parents, and her new lover was wrongly accused and did time for his stabbing, so upon his release they contract the village spell caster to organize a fire ritual (which may have been descended from Hindu Homa rituals brought by Gypsies from Rajastan) after which they want the ghost to refocus his attentions on the girl he'd made away with in the first place..

The second song of both videos relates the nocturnal lights of the Will-o'-the-wisp, which has inspired myths the world over including references by Shakespeare, Milton, Goethe, Coleridge, and Brontë, to the appearance of the ghost, leading to Miles Davis' toots to the ghost in his tribute to De Falla and Joaquin Rodrigo.

Not that enthused about Chelsea right now..

I'm bitter that Ramis Barquet went belly up because that was one of my three or four favorites... art from those countries in the South where they don't fit into the local theory (except at MoMA, where the Latin American collection consists of works that agree with Gringo Theory rather than taking the artists for what the are).. like Luis Felipe Noé and FranciscoToledo aren't repped in NY, um.. that's crazy, which is not to say they aren't making a living but it's our loss.. Last I was at R.B. I found the Tomás Esson show wonderful but didn't write it up as it was ending. Apparently I didn't upload enough Julio Galán web photos, or maybe other factors came into play. In the other galleries now there's a lot of "This one's ripping off early Pollack, that one's ripping off Stephen Shore, this one's ripping off Ellsworth Kelly, that one Joan Mitchell, this one Brice Marden, that one etc etc" because many artists and collectors stay close to the art history department narrative. If you want me to name the names of the imitators, my Paypal email is different than my listed email so ask first. Pace follows up the Matta show with Dubuffet's play-ontology of his last two years of being, you should be able to tell by that phrase whether you'd be into that.

I have, however, composed my thoughts of where best to fill your High Line park pic-a-nic basket before/during a Chelsea stroll in my under-utilized NYC travel blog, like this is the first post since I registered the address a while back. I've decided it's bad luck to not mention certain eating places because my places of choice have been closing. 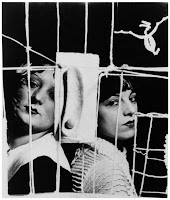 In Soho, Jon Kessler's Blue Man Groo... I mean.. Blue Period - his art-historical referentiality has been kicked up a notch as he's running the Columbia program and it may have been more interesting to try to figure out how Giacometti's Palace at 4am (right, Man Ray photo) related to the Iraq War than it would seem his current theme is tho I have yet to go... Picasso's Blue Period could almost be a new Vegas casino at this point. He manned a control console at the Palace at 4am when I was there and I got a laugh by asking "Were you afraid the war would end before the show opened?"

The Brooklyn Museum has a long wall of Djuna Barnes' newspaper art and writings, which I most enjoyed and is an indispensable spectacle for Barnes enthusiasts. Right around the corner Rachel Kneebone has a thought-provoking riff off the Museum's Rodin holdings. In between, the permanent Judy Chicago installation with the murderer's row of the place settings of Emily Dickinson, Georgia O'Keefe, Virginia Woolf seems to grow on me as it would have never occurred to me to get a grant for a ceramic memorial to Woolf's genitalia. The Brooklyn Museum needs dough, has spiffed up its Syrian and Egyptian reliefs and is too run down and out of the way to attract a zillion annoying tourists like the Met and MoMA. They hang some of their best paintings high up, though, like one of Rothko's 1930s works.
Posted by Ian Keenan at 1:46 AM No comments: