"The artist exists because the world is not perfect. Art would be useless if the world were perfect, as man wouldn’t look for harmony but would simply live in it. Art is born out of an ill-designed world.”
- Andrey Tarkovsky 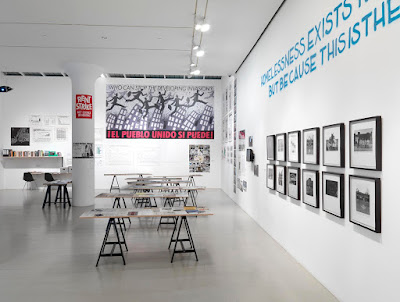 Martha Rosler adorns the wall with Peter Marcuse's "Homelessness exists not because the housing system is not working but because of the way it works" in her update on the gentrification theme explored the world over by artists that she first took up at Dia in 1989, through Saturday at Michell-Innis & Nash 534 W 26th Street, across the street from the construction site of Zaha Hadid's "39 generous loft-like residences.. each with the artist’s signature mark woven into the design" from $4.9M to $50M (right).  The focus is on community struggles but it also brings clarity to some of the problems of how art is experienced nowadays, mapping the NYC Metro galleries and displaying photos of art communities in China, including townhouses surrounding a smaller Eiffel Tower and an island replicating Hallstatt.  A day can be spent there watching videos and making use of the library and computer programs.


Previously noted, highly recommended: Terrence Koh extended til July 29 at 212 Bowery; Bruce Conner til July 15 at 521 W 21st Street, Sigmar Polke at Zwirner 20th St extended til July 22, Asger Jorn extended til July 29 at 35 E 67th Street, Unifinished at the Met Breuer til Sept 4.  Conner's show at MoMA is open as is a new Dada exhibition.  Also Michael Werner now has AR Penck's work before he first showed at Werner Cologne in 1969 (4 e 77th til Sept 3), Punjabi and Rajistani paintings at the Met til Sept 12, Louise Bourgeois, Marlene Dumas, and Ghada Amer headline 'Women Look at Men' at 547 w 25th til Sept 2, and Rabin Mondal, about whom the shorthand 'the Bengali Francis Bacon' inevitably and imperfectly comes to mind is at DAG Modern 41 e 57th 7th floor til Sept 3.