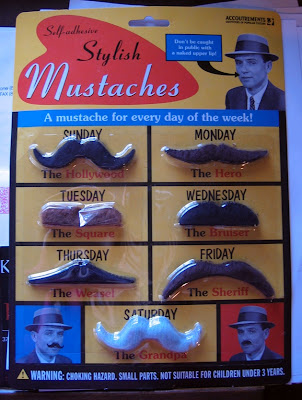 The first two were clear, but today’s gained an Arthur Dove quality from its clouds, especially before the sun broke the horizon when there were just a few strips of grey carrying a little orange on their backs. As the sun ascends it sends rays out from behind the clouds as if scrolls are going to come down with laws and judgements.
Posted by Ian Keenan at 7:50 AM No comments:

I have not beheld a sunrise for a considerable amount of time, perhaps to be counted in years. I’m inclined not to characterize this as an incompleteness, treating this, too, to the phrasing of consumerism, but to note how something this fundamental can be placed behind. The wait has given this morning a force. Like Indian music structures itself around the unity of the universe and time, the ritual of light, life and cycle, memory joins me to my own life and through sight to the notation of eternity as it is taken down in our quarter in the universe. The sun is heard as it affects.
Posted by Ian Keenan at 7:32 AM No comments:

Dream journey: Treasury Secretary Henry Paulson came over, saying he needed to chill out a bit. "I brought Jackson Browne. Should I put him on?"
Posted by Ian Keenan at 1:27 PM No comments:

There's a lot of paintings up in the galleries this fall, which is a good thing. How can it not be? I like paintings. Paintings are really what I go there for. Video exhibitions should be confined to works with imagination and artistry. I like video, but I usually come away thinking that people in Williamsburg have cameras but aren't sure what to do with them. Large, post-industrial spaces lend themselves initially to single-concept sculpture series or installation works, because hanging paintings means filling up a lot of wall space which is viewed as daunting. So I note that the large space occupied by Gagosian on 24th Street which has housed large Serras and Mike Kelly high school catharsis carnivals is now showing its second straight painting exhibition, and I'm not afraid of progress, progress that returns to that old, obvious form.

I've only really been in Chelsea for 45 minutes for the past month, which enabled me to see the new Lari Pittman show and peek in on a few other things. The Pittman show (recommended) is up for the rest of the month.

I became interested in Pittman's work in the mid-90s upon seeing one of the Decorated Chronology of Insistence and Resignation series, taken in by the endlessly possible critiques of culture and form within the post-Arshile Gorky depth of the canvas. 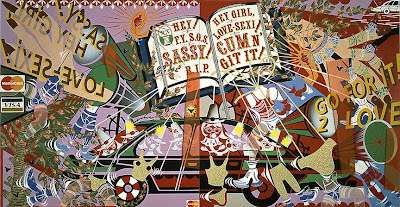 Credit card symbols, are, first of all, two-dimensional, so they frame the other methods of foregrounding, and represent an inclusive entrapment, as when Ashbery notes that everyone is invited to the showboat to gamble. Pittman notes there is no culture in LA that precedes consumerist culture, and the canvases serve as depictions of commodity culture while simultaneously existing as objects within that culture. Beyond the object, though, there is life, the life of the canvas and art and the references to heart, body and soul. Debt is the postmodern medium of exchange between cultures, artistic debt being no less illusory as economic and political debt. 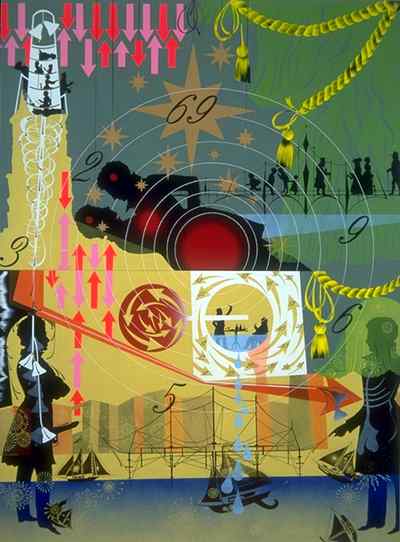 Pittman's new show returns to eternal themes by way of referencing the Flemish vanitas painting of the 16th and 17th Centuries, which influenced Cezanne and Picasso (pictured: Vanitas by Juriaen van Streeck, 1632). That late Reformation-era genre's biblical grouping of art with vanity and death responded to the Catholic, Southern European baroque style of the Counter-Reformation, and perhaps Pittman is consciously reconciling his Protestant blood with his more talked about Colombian heritage, but he is clearly subjecting the gloomy sepias of Dutch interiors to his florescent Southern California palette. 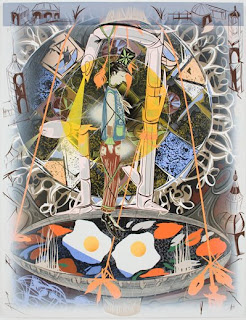 Whatever the inspiration, Pittman isn't reproducing the objects of the vanitas tradition so much he is internalizing the representative strategies and playing with the still life juxtapositioning. The empty glass, for instance, remains for its utility as a convex mirror generator, but the skulls and scrolls are set aside for fried eggs, bunnies, and mice with butterfly wings for ears.

The utilization of the day-glo palette for cultural critique calls to mind the recent Sue Williams show at Zwirner. I am not inclined to report on shows that have ended, but the series is a variation on a theme and I can just put a picture on my blog, 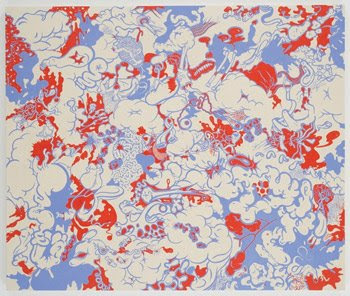 which consists of day-glo abstraction with some body parts suggested in the Bacon/Matta vein, titled "Project for an American Century," a direct reference to the thinktank group that planned the Iraq War before the attacks of 9-11. My interpretation, which doesn't take much speculative daring, is that the works are suggestive of the Disneyfication of both cultural awareness where the lightness of pop culture obscures the death of over a million and the international promotion of this culture through pop music- bubble gum sensibilities. It was interesting to see the two shows in sequence, though I wish I had seen Pittman's first in a way because of Williams' direct appeal to the viewer. Pittman is all over the place and exists to be seen in its many permutations, which gives you more to do if you truck out there.

As I said, I didn't stray far from Zwirner and the 24st Street row in the time I had but I checked out some of the 23rd Street presentations amongst the pricey apartment lobbies, which included Nathan Redwood at Carin Golden that evoked Thomas Hart Benton on BC weed (in the sense that they're landscapes that aren't landscapes) with Guston-Crumb cartoon methods, and the easy on the eye artistry and art history references in the oils and bronzes of the straighoutta Yale MFA Havard Homstvedt at Perry Rubenstein.
Posted by Ian Keenan at 10:04 PM 1 comment:

The country had one choice amongst the major candidates that opposed the Iraq War, and that choice won despite relative inexperience, but his first choices have been pro-war: Biden and Emanuel. I recall him promising he would change the 'culture of Washington' that led to that war. At least Obama reiterated his critique of the war up to the general election date and, most importantly, won instead of McCain, Rudy and Hillary.

The United Nations should monitor Alaska elections. Lisa Murkowski outperformed polling expectations in 2004 and now Ted Stevens, coming off the felony conviction, has substantially outperformed post-conviction polls which had Begich up by margins of 8 (Rasmussen), 22, 2 and 6 in the days before yesterday. Alaska uses Diebold optical scan machines, which have been proven to be susceptible to voter fraud.

The Democratic Senate pickups, as well as the Presidency, have been by large margins and the Republicans have generally won the close Senate races of the past decade. What's comforting is that the margins put up in GA (Diebold), AK, and MN (ES&S) are not 51% or more which is what you would shoot for if you were rigging the election. Bev Harris documented in her book something I noticed at the time, that Chambliss' 1994 margin for victory over incumbent Max Cleland defied all polling, and she noted other irregularities in Georgia voting that year.
Posted by Ian Keenan at 11:17 PM No comments: