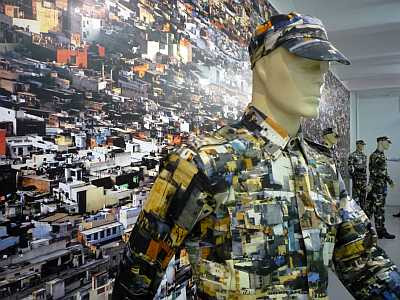 Ending today is the New York debut of Punjabi artist Visha Gahotra (513 w 20th St), which welcomes guests with her 2008 installation "Neo-camouflage" (above): six soldier mannequins matching the color pattern of an Indian megalopolis' urban labyrinth, which resonates with the imagery of another show ending today: Robert Morris' "Labyrinths" at Sonnabend (536 w 22nd St). Morris got his start as an artist at age eight, taking the bus to the Nelson Atkins in Kansas City and laying out with his crayons in front of the Egyptian reliefs, later pastiching their Cezanne and, as in this show, Goya's "Caprices," among his many art history references to come. He is heavily influenced by some linguistic theorists: Wittgenstein, Chomsky, Davidson.

Morris' show presents his labyrinth drawings throughout his career and a wire fence labyrinth in the back courtyard. My experience of walking through the labyrinth was moving and personal, not tied to one image or specific issue. I didn't think for a second about prison camps, though Morris had used the wire fence two years ago for a labyrinth in Łódź, Poland, 30 miles from the Chelmno concentration camp where the Nazis enclosed a wire fence inside another, and indeed the Łódź ghetto had a labyrinthine grid. Wire fences also form a labyrinth at the Guantanamo detention camp. Morris' labyrinths are very straightforward as mazes, not usually giving you much opportunity to get lost. He uses many variations of scale, altering the participant's type of reflection, which he doesn't discuss much though he notes in an essay the monumental size of Nazi architecture. I found the wire fence very utilitarian - in a good, practical way - "here's your labyrinth" - and the transparency of the fence affected my experience, allowing me to know that I was there in a labyrinth and gaze out at the world beyond it. 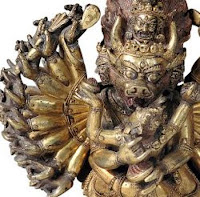 The labyrinth has been called an "incomplete" mandala: it would seem that the labyrinth locates, like the mosaic at Chartres, the pilgrim more at a moment in time and space but Japanese mandalas are situated in specific places. The axe (labrys) appears in both, in the labyrinth to slay the bull and in one of the many hands of Vajrabhairava in mandalas, who like the Minotaur often has a bull's head, and whose use of the axe eventually abolishes duality. The labyrinthine floor mosaics in ancient Greece were used for dances.

The "star shaped dodecagon behind trenches" which the architecture scholar Austerlitz in WG Sebald's novel of the same name says was the preferred design for fortified cities by the end of the 17th Century, which the narrarator says "strikes the layman as an emblem.. of absolute power" reminds me of a Carl Gustav Jung mandala (left). The early Sumerian towns seem to have consisted of a temple surrounded by labyrinthine streets, which, like the medinas of North Africa, gave locals an advantage over invaders. Walter Benjamin's Arcade Project was by his account inspired by Louis Aragon's sections in 1926's Le Paysan de Paris of the destruction of labyrinthine streets when (as with Gahotra's cityscape) they suddenly were considered an obstacle to social control. Morris sees in the labyrinth a mythology preceding its physical remains which evades logic and experience, quoting from Wittgenstein's Philosophical Investigations 203: "Language is a labyrinth of paths. You approach from one side and know your way about; you approach the same place from another side and no longer know your way about." Aragon started his novel out with an attack on philosophers, "incapable of tackling the smallest problem without first going through the routine of recapitulating and then refuting everything that predecessors have had to say" and then proposes that the labyrinthine passages around the Opera quarter "are not yet inhabited by a deity. It is forming there, a new godhead precipitating in these recreations of Ephesus like acid-gnawing metal in the bottom of a glass." 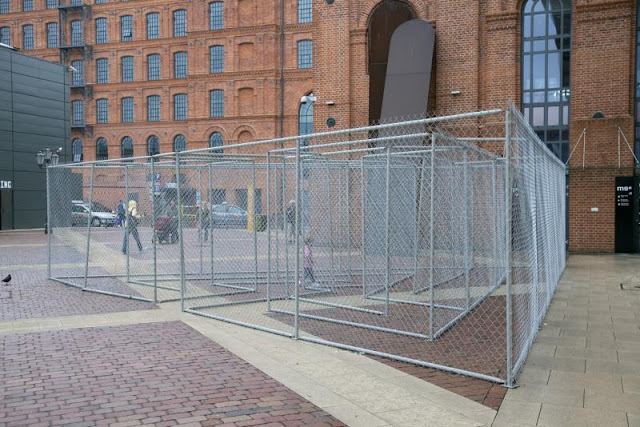 Posted by Ian Keenan at 3:35 AM No comments: