Chioma Ebinama's first public exhibition at this March's Spring/ Break fair, the series Rituals for a New Direction, left a strong impression on its witnesses, with her dutiful curator Raphael Guilbert holding forth throughout the proceedings to explain the North Jersey product born of Nigerian immigrants' feminist reworkings of Igbo narratives rendered masterfully in ink and watercolors.  As with Wifredo Lam, liberties are taken with divine iconography through intuition rather than scholarship, as Claude Carnuschi writes "(Lam) presents his art as genuine reflection of unconscious processes rather than a deliberate imitation of African forms."  Lam, though, eschewed both narrative and ritual, both cornerstones of Ebinama's process.  It is unclear to what extent Rituals was a riposte to patriarchal tendencies in Igbo tradition such as the Ofu, the symbol of the male governance of the household.  The antagonist in Rituals is the male Efu while the protagonist is the heroine Anwulili - Anwuli is an Igbo girl’s name meaning ‘joy.’  In 1964's Arrow of God by Igbo novelist Chinua Achebe, Ezeulu is the high priest of the regional god Ulu until British colonists convince the village to convert to Christianity. The Yoruban concept of àjé, signifying the power of the feminine, recurs in Rituals by way of Louise Bourgeois' influence in her depiction of the menstrual cycle.  She also drew inspiration for Rituals from Mesoamerican codices, notably in a narrative fragment which suggests at first glance the Bayeux tapestry. 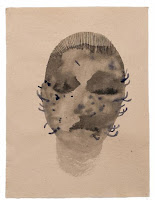 Peter Probst writes "(In) Yoruba aesthetics.. the mastery of the 'inner eye' is what distinguishes the artist. Using it, he/she is able to perceive not only the outer form of the object, but also its inner essence, virtue, or character (iwa).. Children's 'inner eyes' are considered to be purer than those of adults, and that is why their experiences are said to be often more intense and colorful," similar to Max Ernst's view "If you close your eyes and you look into your inner world, and I believe the best way to do is to have one eye closed and to look inside, and this is the inner eye, and with your other eye you have it fixed on reality, what is going on in the world." The Birth of the Goddess Anwulili from Rituals reminded me of Ernst when I first saw it, but as with Ernst the bird headed figure comes from African art, likely from a wooden ritual Senufo hornbill from the Ivory Coast displayed at the Met.  The current show (250 Broome, 11-7, extended to August 4) derives itself attentively from emotional content with watercolors best seen in person - white dots on figures signify wishes, memories, or growths, spikes coming from heads reference protective nails in Congolese ritual sculpture.

Two Hauser & Werth shows are ending July 28: Among the three floors of the Pearlstein Collection at 22nd Street I predictably enjoyed the first, featuring three original exquisite corpses and, astonishingly, Breton's January 1919 collage letter to Jacques Vaché, sent the month Vaché killed himself, including a Max Jacob-attributed 'humor is indulgent irony,' references to Aragon, Lautréamont, Rimbaud and Jarry, and poetry of Apollinaire's after Vaché had, a month after Apollinaire succumbed to the Spanish flu, softened his position from 'the great reservations' about him for 'making art too knowingly, for patching up a bit of romanticism with telephone wires, and of being blind to dynamos.'  On 69th St, amid the Basque Eduardo Chillada's many sculptures and the worthwhile authorized one hour video bio, his ink works on paper remind me of Miró's Constellations as they seem to depict ripples in the water, as he would cut school during thunderstorms to sit under a rock and watch the sea.


New works by Manuel Mendive debut this week in the borough museum serving the Danish settlement of Jonas Bronck, soon to be legislated with much acknowledgement by Alexandria the Great.

Likewise one can repent for taking in the summer show at Clearing (396 Johnson) by canvassing for Julia Salazar's State Senate bid in the evening (82 Central), in the neighborhood featuring the #1 and #8th ranked worst landlords in the metro area.  Of Chelsea's Painting III glorified group shows, Greene Naftali's 1st floor show to the left of 508 26th features Hervé Télémaque and Helen Marten.

Posted by Ian Keenan at 9:59 AM No comments:

Posted by Ian Keenan at 3:04 AM No comments:

of a
b
sol

ness s
ur
round

ed by fire
f
lies
Posted by Ian Keenan at 3:03 AM No comments:

Posted by Ian Keenan at 4:29 AM No comments: