What's up another week 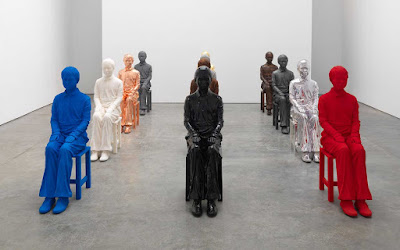 Will Ryman's new sculpture Classroom, in which each student is made of a different natural resource, occupies the gallery in front of his The Situation Room, based on the photograph of Obama and his advisors watching the presumed raid on bin Laden's compound, made of crushed black coal (515 w27, til Oct 17).  The two rooms together offer a base and superstructure snapshot of the culture surrounding it, as defined by Marx in 1859: "The totality of these relations of production constitutes the economic structure of society, the real foundation, on which arises a legal and political superstructure, and to which correspond definite forms of social consciousness. The mode of production of material life conditions the general process of social, political, and intellectual life." Ryman "sketched out the scene" of The Situation Room "trying different colors before settling on black coal, both as a symbol of prized natural resources that have led to so many wars, and for its ability to redact the identity of the faces, as though they were censored material. From a cold-storage room, he pulled out studies where he had tested different grains of crushed coal, both glinting and dirtlike. The coal dusting over the figures evoked the lost city of Pompeii, where ancient life was buried in ash, frozen mid-motion." I'm predictably reminded of the "stone" phase of Magritte, figures petrified in his paintings beginning at the outbreak of WW2 and more so in the 50s, concurrent with Ernst's petrified Europe After the Rain series.

The Magritte influence is more clearly seen on the second floor of Metro Pictures (519 w24), where a few new Jim Shaw paintings* include a painting in which the stigmata of Jesus is apparently inflicted by several of what René called "the locomotive (charging out of the chimney).. This metamorphosis is called "La Durée poignardée (Time Transfixed)," (below) a metamorphosis compressing, in Shaw's case, the image of the crucifixion, more prominent in Western painting, and the transfiguration, emphasized in Eastern Orthodox iconography, into "a single glance."  Shaw visited Magritte's petrification motif in his "Red Rock," Magritte's "Castle on the Pyranees" with faces of pop culture painted on, as Noëllie Roussel paraphrases "Jim Shaw has often referred to Magritte as a symptom of a culture in which reproductions and their spin-offs so saturate our mental and imaginary worlds that art eventually becomes part of our way of seeing reality." This joins a few other new paintings and a wall of older, amusing parodies of folk art, a room which seems to be a well-guarded secret on the internet as the staff conjectures it will be up another two weeks. 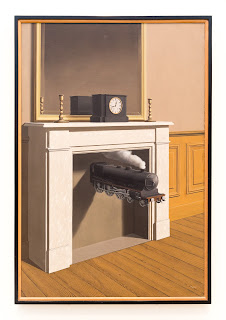 You may wonder, how does Jimmy get away with art history references?  I'll let Riopelle, who has what unsurprisingly I consider the best show in town** at Acquavella (18 e79, til Dec 11), take this: "Picasso? No, he's a mass of references. A reference himself. Artaud yes, Picasso no."


Up another week at BravinLee (526 West 26th Street #211) is Elektra KB's "Accidental Pursuit of the Stateless," in which the Papess of the Theocratic Republic of Gaia expresses her solidarity with migrants though a video of three costumed T.R.O.G. natives attempting to assimilate into German culture, filmed during her residency in Berlin.  An embroidery of hers from her last show quite stood out at Spring/Break this year, and there is more here in that format as well as collages, a bed, and various other media. 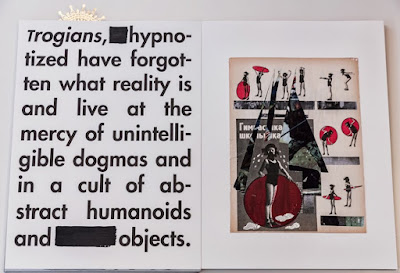 * coinciding with his retrospective at the New Museum through Jan 10
** along with the larger CoBrA show, up til Oct 17.
Posted by Ian Keenan at 10:53 AM 1 comment: