Goya's dog wasn't shown to the public until after Turner's death, but Turner was most likely aware of the controversy over composition aroused in 1810 by Casper David Friedrich's The Monk by the Sea (below), when Turner was 35. Turner's Sunrise with Sea Monster of 1845, executed a few years after Friedrich's death, has the same vertical grid pattern, similar cloud formations, and, like Friedrich's canvas, doesn't emphasize the water beyond the land so much as suggest it. Two years earlier, Turner had painted the After the Deluge series, naming one canvas after Goethe's theories on color which he feverishly studied in this period, using a brush stroke pattern similar to that of Sunrise. Friedrich's Monk would become for some a phenomenological protagonist, enabling painters like Whistler in his Nocturnes to give free rein to their consciousness, and in 1961 Robert Rosenblum traced a lineage from Abstract Expressionism and the color field back to this painting. Turner's work is indispensable to this lineage for his time and as "a figure that cuts through time" (Deleuze), but while Friedrich reportedly decided to cover up the only two ships on the horizon, Turner tended towards depicting some actor immersed in the work of nature. 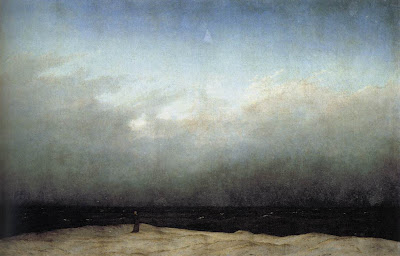 The Sea Monster is no such actor: if anything in nature complicates matters for it you couldn't tell. A sea creature in the background of Paris Bordone's St. Jerome in the Wilderness in Philly reminds me of my observations of the dragon in Venetian iconography (I, II), an image like Giorgione's Three Philosophers mysteriously rendering a moment of East meeting West in the Veneto. 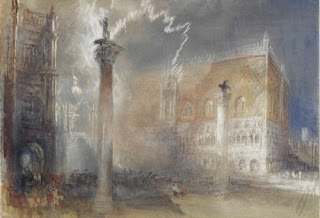 While for Henry James "feeling a sea-breeze throb languidly between the two great pillars of the Piazzetta.. is to be as happy as is consistent with the preservation of reason," Turner characteristically selected a more threatening weather pattern for his 1835 rendering of the 12th Century pillars (right). One column holds the winged lion, the symbol of St. Mark which Catholics say derives from biblical sources - the lone voice roaring in the desert, Ezekiel's vision of winged creatures - but is more likely lifted from "a Persian, Syrian, or even Chinese chimera"; visitors to the Met and other world museums are confronted with the Assyrian Lamassu, which had a human head, though it more closely resembles the Chinese Pi Xiu, which according to Feng Shui ought to be facing away from the Doge's Palace. 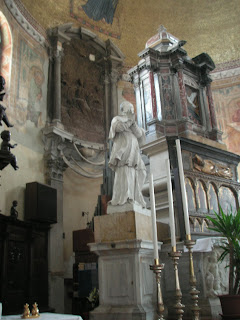 The other column features St. Theodore of Amasea, Venice's patron saint before St. Mark's remains were pilfered, slaying a dragon which is here represented as a crocodile. The story of St. Theodore and the dragon dates from the period of around the 8th through 10th centuries, when Amasea was warding off barbarian attacks. Beneath the columns, Turner painted San Giorgio Maggiore, and the church would have welcomed Turner with Carpaccio's 1516 St. George and the Dragon, a story with a narrative similar to Theseus and the Minotaur, but may have derived the dragon figure from Python, the creature of the earth that lorded over Delphi until slain by Apollo. The first occurrence of a storm god who slays a dragon on the Mediterranean may be Taru, from unwritten stories of 2000 BC of the Hattians of Anatolia. On Murano, the Venetian island one up from where Pound and Stravinsky are buried, the Romanesque Santi Maria e Donato contains what is reported to be the bones of a dragon (left) that St. Donatus killed by spitting on it because the dragon was poisoning a well. St. Donatus was from Tuscany, but the bones, from an extinct creature, likely were also shipped from somewhere in the Byzantine Empire or further East.

If the St. George story comes from a culture intent on improving on nature and the Chinese belief in dragons indicates reverence for nature, it is the Chinese dragon which currently retains its popularity, a fear of the storm shared with Turner. And as with the Mercurius figure of alchemy, the Chinese dragon represents both the below - the earth and the seas - and the celestial. Svādhiṣṭhāna, the second chakra of Hindu tantrism "located at the genitals" and "associated with the water element" is represented as "an aquatic monster represented as a crocodile (symbol of fertility)," resembling the Sufi nafs and Yesud of the Kabbalah. (353) The Egyptian crocodile god Sobek, comprising opposites like Mercurius, is in some stories complicit with Set's plot to keep the limbs of Osiris from Isis. In the Occulta Philosophia the dragon says: "By the philosophers I am named Mercurius; my spouse is the gold; I am the old dragon, found everywhere on the globe of the earth, father and mother, young and old, very strong and very weak, death and resurrection, visible and invisible, hard and soft; I descend into the earth and ascend to the heavens, I am the highest and the lowest, the lightest and the heaviest; often the order of nature is reversed in me, so regards color, number, weight, and measure; I contain the light of nature; I am dark and light; I come forth from heaven and earth; I am known and yet do not exist at all; by virtue of the sun's rays all colours shine in me, and all metals." 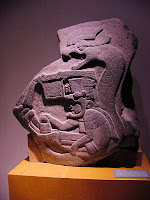 Q'uq'umatz, the feathered serpent that created the earth in the Popol Vuh appears in other Mesoamerican creation myths going back to Olmec remains (right). The snake was associated with the underworld while the wings, that of a quetzal, represented the celestial plane and wind, to use Lévi-Strauss' phrase "a mediator between earth and sky," like Turner's sea monster on the picture grid. "..The most common Olmec motifs might be associated with the earth and sky. The Olmec "dragon" may be a caiman, a Mexican crocodile, which when split open by creator gods became the earth floating in a primordial sea, which was associated with agricultural fertility and sprouting vegetation." "Iconographic investigations reveal that the Olmec Dragon, like later Mesoamerican primordial monsters, floated on the surface on the waters of creation. In some titanic struggle in the mythic past, the body of this great leviathan was broken apart to form the earth and sky realms. ..The Olmec Dragon is either two seperate creatures or a single monster with both terrestrial and celestial aspects." 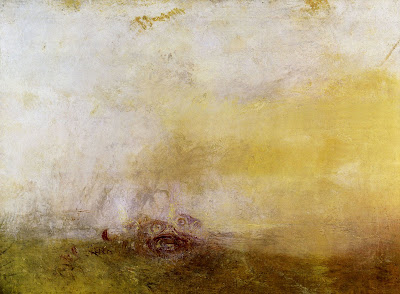 I'm leaving myself open for
ridicule, perhaps, but when I look at the Goya dog painting, I see not only the black head of the hidden-bodied dog peering up at the bottom, but a large dog--or at least animal--sort of at the center of the sky area, with extended paws. But if so, it's like there are two tiny poplars planted in its rump. It's like looking for pictures in clouds, I suppose.

I only ridicule on Silliman! except for him, him, him, ok but it keeps me off the listservs. But never you Stephen.

This was a mural so it may have been painted over, and Goya would depict all sorts of animals in flight on his Caprices. I'd have to look at this more.

don't see the poplars tho

Colossus has his paws up, as does the captive on The Third of May

I didn't think YOU'D ridicule me; I thougt someone else might. Rather neurotic of me. I'm glad you eventually could see "my" animal!

And to feel that the light is a rabbit-light
Which at this hour wants to be your dog
And nothing need be explained;

Then there is nothing to think of. It comes of itself;
And east rushes west and west rushes down,
No matter.