While I'm on the topic of Bataille and the labyrinth, his use of the image is of some interest. Recent scholars have identified the Minotaur as a solar personification worshiped by the Cretans during their control of the Aegean, which the Greeks were forced to pay tribute to. The myth of the slaying of the Minotaur, by this logic, was propaganda for the Greeks winning independence from Crete, having a secondary and more lasting implication of Daedelus' civilizing craftsmanship, the ascent of law, specialization, and bureaucracy over animality, though the Minotaur was not necessarily a less evolved creature but the product of Pasiphaë disguising herself as a cow to copulate with a bull, a costume André Masson, a close friend of both Bataille and Breton, chose to forget while composing his 1938 rendition of the event (left, below) though he remembers her horns in a crayon sketch (right, below): 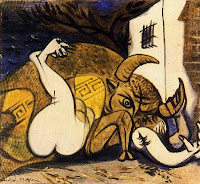 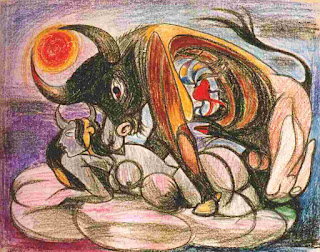 Though Picasso said "If all the ways I have been along were marked on a map and joined up with a line, it might represent a minotaur," his Minotaur phase began after he did the cover for the first issue of Minotaur in 1933, which the Swiss publisher Albert Skira signed Breton onto after developing the concept with Bataille. Breton and Bataille's rivalry crystallized in Breton's attack on him 1929's Second Surrealist Manifesto, which Bataille was quick to see the merits of. The two contributed pieces to Minotaur and arranged a rapprochement in 1935 to collaborate on the magazine Countre-Attaque*, at a time when leftists were united against Fascist riots in Paris amid Hitler's Chancellorship to the North leading to the most animated protests since the Commune and Léon Blum becoming Prime Minister. Previous to this, Picasso was keen to play both ends to win over the Paris avant-garde, seeking to maintain Breton's critical support while Bataille ran a special Picasso issue of his Documents in 1930. For Minotaur, Breton wrote his first major essay on Picasso in 1933.

Having Bataille compare you to Icarus was high praise, meaning you had taken one for the team, which he reserved for the Surrealists in response to the Second Manifesto ("The transformation of Icarian reflexes into a pathetic-comic and gratuitous literature is doubtless surrealism's more striking characteristic") and for Picasso ("what ruptures the highest elevation.. is only noticeable in the paintings of Picasso"), both in essays in or around 1930. Bataille's 1927 Surrealist-influenced prose poem The Solar Anus, begins "It is clear the world is purely parodic.. all things would be visibly connected if one could discover at a single glance and in its totality the tracings of Ariadne's thread** leading thought into its own labyrinth.. when I scream I AM THE SUN an integral erection results, because the verb to be is the vehicle of amorous frenzy," published with Masson's illustrations in 1931, a year after the Picasso essay "the bull himself is also an image of the sun, but only with his throat slit***." In 1935-6's "The Labyrinth" "THE UNIVERSAL resembles a bull.. sometimes hurled by the rage of ruin into the void ceaselessly opened before it by a skeletal torero" identifiying the bullfight as a labyrinth concurrent with Picasso's etching the Minotauromachia, which appears to depict Marie-Thérèse Walter as a wounded, skeletal torera attached to a horse and also the bearer of the light that the bull hurls itself at. Juan Larrea remembered "hearing from (Picasso's) own lips as an obiter dictum that in pictures from a certain period of his artistic development, the horse generally represents a woman who played an exceptionally important part in his life." 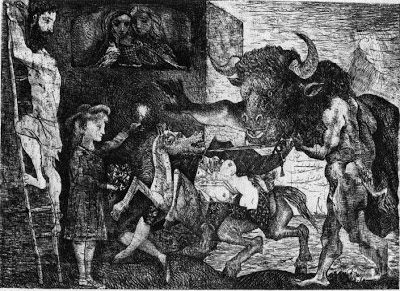 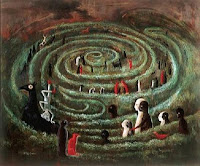 In Bataille's posthumously published Accursed Share he excerpts Bernardino de Sahagun's retelling of the origin of the Aztec Sun God Nanauatzin closing his eyes, "taking courage," and hurling himself into a fire set to bring light to the world. 1954's Inner Experience included a revised version of his 1935 essay on the labyrinth, sorting out a narrative which suggests to me he thought Paris was a labyrinth playing out a drama of solitude, rupture, and independence on the one hand and interdependence and coterie on the other. "The power of attraction empties the constituent parts of their richest elements. Cities are slowly emptied of life in favor of a capital. (The local accent becomes comical.)" This is a French phenomenon, more so than Germany, Spain, Italy, which have decentralized intellectual centers, often tied to old ethnic kingdoms, while the circular Paris (like Leonora Carrington's labyrinth, right) provides the effect cited, drawing in Reims' Bataille once abandoned by a troubled relationship with his father, leading him to "a summit where being reaches the universal.. in which a central will subordinates peripheral elements to its law" which may be a reference to Surrealism, until he does battle in the bullring with "nothingness." Nothingness and the influence of Descartes and Hegel are processed with a minimum of reference to Sartre, a rival who criticized Inner Experience, though he is credited in the notes of 1939 for conveying the "dangerous and mortal character of the sacred." In Inner Experience, the symbol of the path to the summit replaces the Icarus metaphor, notably in his praise of Hegel "no doctrine is comparable to his - it is the summit of positive intelligence," while repeatedly likening Hegel's thought to a circle that moves in and out of darkness, which Derrida interprets at characteristic length as a poetic tension between the servile and the sovereign, the latter being similar to the independent Cogito, Sein, and/or Pure Immanence (pick one). 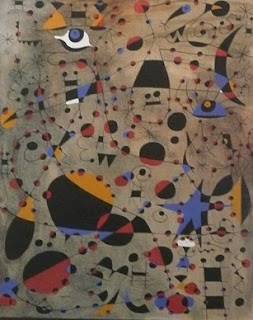 While Breton looked the other way when his friends (or "elements") used mythological images, he himself observed for the most part a strict Baudelairean aversion to them, including the labyrinth, a position which would soften in his later years as with 1958's 12th poem illustrating Miró's Constellations (right) wherein the female protagonist sees the god of Amor fly away from burning it with lamp oil, is told she must climb a vertical labyrinth to find him at "the very top of the Tower" until she arrives and the "reprobate voice" tells her she must "redescend by the way you came. You will not stop once on the ground. It is when you have got here anew as reflection that the balance of forces will be revealed to you and that you will lay a finger on the casket of perfumes," written while he was living in the very vertical village of St-Cirq Lapopie, lorded over by the castle ruin La Popie (Celtic for "elevated place," not seen in Henri Martin painting below). 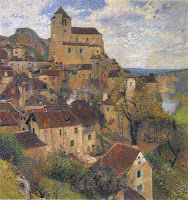 * which Claude Cahun participated in, before leaving it with Breton the following year over uneasiness about Bataille's political positions
** "till Theseus, son of Aegeus, slew him and retraced his way, finding the path by Ariadne's thread.." Ovid, Metamorphosis
*** "Sun slit throat"
Posted by Ian Keenan at 2:24 AM