The Cuban Yoan Capote (Shainman, 513 w20, 524 w24 til July 24) "fully intended to immigrate.. During his extended visit to Vermont and New York, he met two people who would influence what became his change of heart.. Carole Rosenberg, president of the Ludwig Foundation’s American Friends.. advised him to return to his homeland, pointing out that he could use the difficult situation there as a springboard for developing work from his very particular point of view. The other pivotal figure was Louise Bourgeois, who had inspired Capote through her use of classical materials like marble and bronze to express interior states of mind." The Ludwig Foundation and Rosenberg drew flak from exiles for sponsoring the Havana Film Festival in New York a decade ago, a contingent that sunk Miami's Cuban Museum of Arts and Culture through "two pipe bomb explosions (one at the museum, the other under the car of a museum official)" after it displayed Cuban artists that hadn't emigrated. 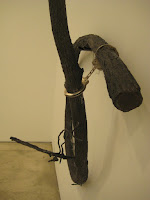 It would seem on the surface that Capote would endear himself to the exiles or their target audience of collectors with statements like "In Cuba and other countries, you have so many people with the fear of expressing what they really think" in reference to his "Dialogusfobia," a brass casting of two megaphones facing opposite directions with a throat in between. Carole's husband Alex has said “the limits have changed, and time has made the situation far more liberal in Cuba than it was. I think governments react when they feel threatened,” he added, “and the present government in Cuba does not feel threatened by anything that the artists might do." Alluding to New York Mayor Rudolph Giuliani’s attempts to close the 1999 Sensation show at the Brooklyn Museum, Rosenberg said, “that could not happen in Cuba. Somebody might try, but they wouldn’t succeed.” Integral to the change was "Abel Prieto — Cuba’s minister of culture from 1997 until 2001.. A progressive communist leader (who).. convinced hardliners in the government that the arts had to be enshrined and artists required special treatment, above all freedom of movement. As a result, Cuban artists were permitted to travel internationally for exhibitions and concerts, and were allowed to return to Cuba with the proceeds of these forays abroad with little restriction." 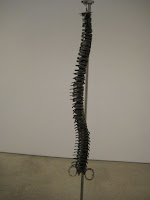 Capote, a star pupil of the Ludwig Foundation, intends to raise his two children in Cuba and retains a staff of thirty there for his elaborate bronze castings which include molding foliage for his 2015 "Pride," a reclining figure of tree branches with an anvil in the place of the torso and two sledgehammers balancing on one another, and 2013's "Abuse of Power," (above, right) utilizing the lost wax process to twist a bronze tree branch and handcuff it, explaining "the Afro-Cuban religion of Palo Monte thinks that trees have entities of the soul." Trees reappear in 2015's drawing "Ruled Life," in which carpenter's levels are placed in holes on the tree, which resonates with my own anger over how trees are cut down routinely at the beginning of construction projects because engineers can't comprehend how they drain water. Capote wants his works to elicit universal interpretations, which may explain why his "New Man" bronze of a spinal chord made of handcuffs (left) is in the entrance of his 24th Street show, with a title ironically referencing Cuban history but applicable to others' experience of the new world order. Capote's views of the Washington-Havana accords inspire a gallery which contains two state room chairs with noses in the middle of the seats, and, on the wall a handshake made out of apparently flammable electric wire."Two Realities" (2015) shows a pair of glasses in which the left eye gets its normal paracentral lens while the right gets a peripheral lens that extends all the way around the head, illustrating how Cuban revolutionary ideology particularizes the "collective consciousness" of the anti-Soviet Jung, a primary influence on Capote.  Capote has created various prototypes for a large scale public work (below) entailing a strollable labyrinth of the human brain. 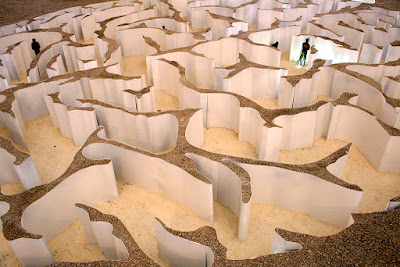 The influence of Jung is evident in Capote's original title, "Archetype," for the monumental sculpture of Fidel Castro made of door hinges from Havana, with old doors underneath it, later re-named "Immanence."  The political question of whether Fidel has opened doors or closed them for people is part of the reflection of self that awaits the viewer.  A few days after ArtNews interpreted he was "transforming the joints from something flexible to something static and monolithic," came in a published interview "(Fidel) is a symbol of duality and of mobility.. This is a very open-to-interpretation piece." 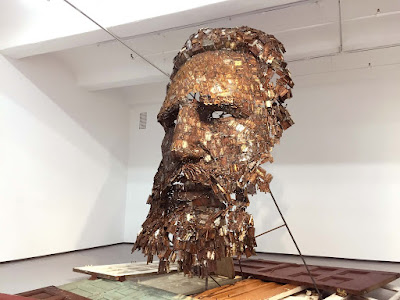 Jung wrote "the archetype is metaphysical because it transcends consciousness," leading it would seem to dualism, except Jolande Jacobi recounts in the "bipolar" archetype.. "the primal source of all human experience lies in the unconscious, whence it reaches into our lives. Thus it becomes imperative to resolve its projections, to raise its contents to consciousness."  The Jungian archetype came from St. Augustine's ideae principales, which "do not perish, yet after their pattern everything is said to be formed that is able to come into being and perish.  But it is affirmed that the soul is not able to behold them, save it be the rational soul." The hinges can be the acknowledging of but reconciling duality, the "point of the mind" (Breton) "at which life and death, the real and the imagined, past and future, the communicable and the incommunicable, high and low, cease to be perceived as contradictions," or the landscape grid, as Jacobi writes "what are the myths of the 'night sea journey,' or the 'wandering hero,' or of the sea monster, if not the eternal knowledge of sun's setting and rebirth, transformed into images."

The title "Immanence" also mirrors the viewer - as it suggests both the hagiographic nature of Fidel's face in Cuba,* the non-duality of meditation within lived experience that Buddhists associate with the term, and Deleuze's reading of Spinoza about which "We will say of pure immanence that it is A LIFE, and nothing else."**  Deleuze wrote elsewhere "the plane of composition of art and the plane of immanence of philosophy can slip into each other to the degree that parts of one may be occupied by entities of the other.. A thinker may therefore decisively modify what thinking means, draw up a new image of thought, and institute a new plane of immanence."

+ Continuing with the Jung in Chelsea theme Jack Pierson describes his automatic drawing as "my brain dancing on paper. I’m adding a new layer by calling them ‘Anagogic Paintings’. That comes from Jung, I believe, but I picked it up reading Michael McClure and Emerson.." along with an assemblage based on a picnic table (547 w25th til Aug 29), while Doosan brings Jung to 25th (533 til Aug 27) in the form of enjoyable Tinguely-like kinetic sculptures by Jung Uk Yang, including his cacophonous kinetic work (right) "based on the lives of apartment security guards in South Korea."  Robert Mann selects delightful black and white and color Ellen Auerbach photos from around the world (525 w26) til August 14 to coincide with her collaborator Grete Stern's show at MoMA.

I noted in this space in February that selections from Motherwell's Lyric Suite are at the Met til the 25th and that I may type about that, and both assertions remain true. Also uptown Peter Regli nods to dualism with white marble Buddhas staring down snowmen tantra style at Lévy til August 15. Galerie Buchholz 17 East 82nd Street has til August 29 editions of every book Raymond Roussel published in his lifetime with sketches, a watercolor, and correspondence concerning "the eccentric plan that Roussel had for his own grave." In midtown John Ashbery and Guy Maddin show their collages til July 31 at 724 5th and Delhi Art Gallery has Indian abstraction (41 e57, Suite 708 til Sept 12, around when the Queens Museum show is now ending).

I will get to the 'how' of commenting on group shows when I get past the 'why,' but Luhring Augustine 531 West 24th Street has an historical survey of the big names of Brazilian neo-concretism til August 28, Matthew Marks expansively surveys recent pop-infused US movements til August 14, Party Beuys (534 w24 til August 14) features a bunch of Sarah Hewitt sculptures, and Marian Goodman has legends of text and abstraction til July 31. 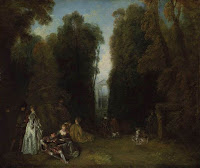 Boston: This is also the last week to see the Harvard Rothkos at Harvard. I have visited the Houston Chapel but these immediately became my favorite late Rothkos because they tease at a representational function, showing an opening which could be a gate, a window, a frame, or a colonnade, a composition I (emphasize) like to believe was inspired by Watteau's "La Perspective (View through the Trees in the Park of Pierre Crozat)" (right) at that town's MFA.  Befitting the surroundings they are showing off lighting technology that restores the paintings to their original colors. Also I am pleased that they are featuring on loan the full suite of Smith's Medals for Dishonor.  The MFA can't show but a fraction of their Japanese paintings but has a large and crowded Hokusai selection in the basement til August 9.

* Fidel, at first anti-Communist, has sought to demonstrate his ideological purity, while Raúl the lifelong Communist has liberalized the free market as Lenin and Trotsky had done before him.
** Deleuze: "What is immanence? A life... No one has described what a life is better than Charles Dickens, if we take the indefinite article as an index of the transcendental. A disreputable man, a rogue, held in contempt by everyone, is found as he lies dying. Suddenly, those taking care of him manifest an eagerness, respect, even love, for his slightest sign of life. Everybody bustles about to save him, to the point where, in his deepest coma, this wicked man himself senses something soft and sweet penetrating him. But to the degree that he comes back to life, his saviors turn colder, and he becomes once again mean and crude."

Posted by Ian Keenan at 7:08 PM No comments: