(emphasis mine)
Posted by Ian Keenan at 2:01 PM No comments:

In addition to Frank O'Hara's statement that Twombly was "witty and funereal" and CA Conrad's poem where "we realize we're driving in Cy Twombly's paintings," I recall Robert Creeley talking about how he walked through a Twombly show after exhibition hours and the custodial staff was having an animated conversation, pointing out different parts of the paintings with their mops... & a conversation I had with a guard at Philly's installation "I'm going to tell my neice about this" "Why your neice" "She paints.. She can do this because she's 8" "Then she should" "But I keep telling people, it has a meaning." In 1994 Twombly sculpted the Thermopylae series, each of which contain insciptions from Cavafy's poem of the same name:

Honor to those who in their lives
are committed and guard their Thermopylae.
Never stirring from duty;
just and upright in all their deeds,
but with pity and compassion too;
generous whenever they are rich, and when
they are poor, again a little generous,
again helping as much as they are able;
always speaking the truth,
but without rancor for those who lie.

And they merit greater honor
when they forsee (and many do foresee)
that Ephialtes will finally appear,
and in the end the Medes will go through. 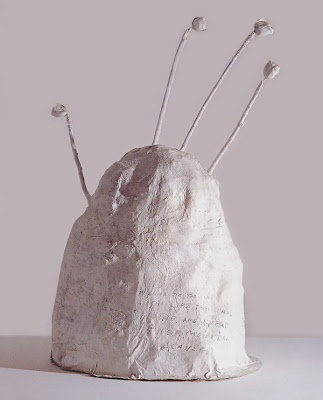 Posted by Ian Keenan at 8:35 PM No comments: