Posted by Ian Keenan at 1:07 AM No comments:

Posted by Ian Keenan at 1:06 AM No comments:

ive
in
it
Posted by Ian Keenan at 1:47 AM No comments:

rat
ive
Posted by Ian Keenan at 1:47 AM No comments:

What's up for one more day: two Met shows 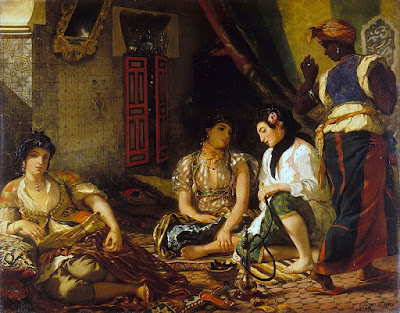 What I liked most about the Delacroix show, organized by the Louvre but with various works from US collections, is the mixture of prints of Goethe's Faust from the Petit Palais with three or four watercolor versions of the poem's scenes from Harvard's Houghton Library. Americans get some quality time with the Louvre's Femmes d'Alger dans leur appartement tho you still have to go to Montpellier for the later version. Picasso was known for brief, infrequent visits to masters' galleries in his early Paris years but as he later openly obsessed over the painting, I believe the curtain and the positions of the womens' heads subconsciously influenced 1907's Les Demoiselles d'Avignon. 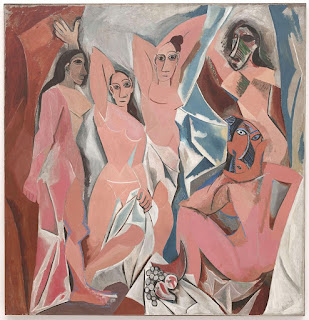 The occasion prompts me to excerpt from Baudelaire's reflections on Delacroix after his death, from his letter to a newspaper editor:

"'what then is this mysterious, indefinable something that Delacroix, to the great glory of our age, has communicated better than anyone else?' The answer is: the invisible, the impalpable, reverie, the nerves, the soul; and this he did - pray, sir, take good note of this - without any means other than color and contour.."

"..in the crowd that gathered to pay him the last honours, many more writers could be counted than painters. To put it crudely, the truth is that the latter never fully understood him."

"'Nature is but a dictionary' he was fond of saying.. Painters who obey imagination consult their dictionaries in search of elements that fit in with their conceptions; and even then, in arranging them with artistry, they give then a wholly new appearance.  Those who have no imagination copy from the dictionary, from which arises a very great vice, the vice of banality, to which are particularly exposed those painters whose specialty lies nearest to so-called inanimate nature: the landscape artists, for example, who regard it generally as a triumph if they can conceal their personalities. They contemplate so much that in the end the forget to feel and think."

"The 'positivist' says: 'I want to represent things as they are, or as they would be on the assumption that I did not exist.' The universe without man. In the other camp, there are the imaginative ones who say: 'I want to illuminate things with my mind and cast its reflection on other minds.' ..the imaginative man must usually have come to the fore in religious painting and in fantasy, whereas genre paintings, so-called, and landscape must, on the face of it, have offered vast resources to lazy minds not easily stimulated..."

"If ever a man had an 'ivory tower', well defended by bars and bolts, it was Eugene Delacroix.. I believe he would willingly have armed it with canon.. 'The one prudence in life is concentration; the one evil is dissipation'" (Emerson)

"I can confidently say that in matters of money and economy Delacroix entirely shared Stendhal's opinion, which reconciled greatness with prudence. 'The intelligent man,' the latter used to say, 'should apply himself to acquiring what is strictly necessary to avoid his having to depend on anybody (in Stendhal's day, this meant an annual income of 6,000 francs); but if, having achieved that degree of security, he wastes time in increasing his fortune, the man's a scoundrel."

I had low expectations for the Conspiracy show but was immediately sold on the great work of curators Douglas Eklund and Ian Alteveer, who were paid the highest compliment by The Nation and The New York Times, whose Tom Friedman is caricatured by one Sue Williams drawing, both accusing them of abdicating the Metropolitan Museum's duty as a left gatekeeper. The floor of the Breuer includes three works previously mentioned here: Mike Kelley's Educational Complex and his friend Williams' All Roads Lead to Langley and iv. Ronald Reagan & William Casey, joined by a generous sampling of her works that characteristically drew the most ire from those two publications.  Another Kelly friend, Jim Shaw, contributes the large installation The Miracle of Compounded Interest (below). Other standouts are Alfredo Jaar's display on Kissinger and Öyvind Fahlström's "World Map" of human rights abuses and colonial grabs from 1972. 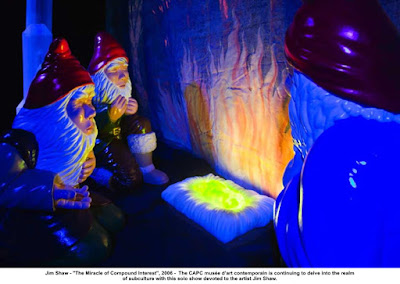 Posted by Ian Keenan at 2:09 PM No comments: