Ubu Gallery has a week left of one of their samplings of Weimar-era art (Piri' Miri Muli' Top Priority; pdf). George Grosz discovered the beauty of ethnic markets and Cape Cod seascapes when he came to America in 1933, but his work immediately after his attempted suicide in an army hospital during WWI reveals the ugly side of contemporary America perhaps more than anyone alive, inspired by Weimar Germany before Goebbels came up with the idea of hiding the intentions of the oligarchy behind sports and entertainment. The show contains an original offset lithograph edition of his suppressed 1923 Ecce Homo, an ink on paper, a watercolor, and an expansive display of his 1920  photo-lithograph series Gott Mit Uns (God With Us), which caused Grosz and his publisher to be "tried for defamation of the military; found guilty.. fined and forced to surrender all copies of the portfolio to the army," in which the architecture of Van Gogh's "Prisoner's Round" is updated for his "Workman's Holiday"; also in the book is his military industrial group portrait "Blood is the Best Sauce" (below). Georg Scholz is much in evidence, including a hand-colored litho of his famous painting "Industrial Peasants" (the cover of the 5th & 6th ed. of Eagleton's Ideology), a mirror image of the painting with the boy's head not cut open and no vehicle seen through the window. Add to that twelve etchings by Otto Dix and two drypoints and a litho by Beckmann. Although the Gott Mit Uns set is the showstopper, the four etchings here by Eddy Smith are perhaps most rewarding from a graphic point of view. 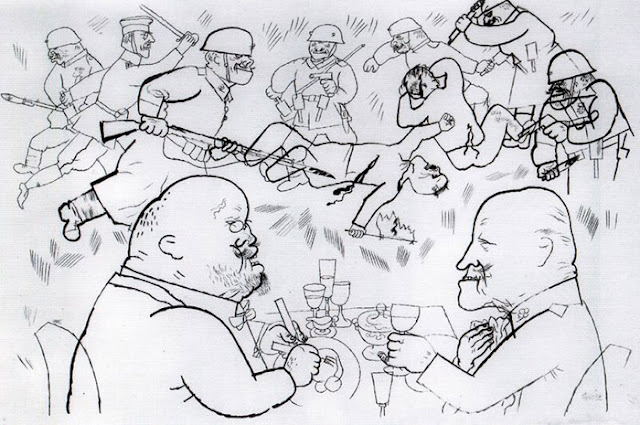 I did get to the two Indian modern shows of which the post-independence overview at the Queens Museum remains open another three weeks. Its strength is its two-canvas-per-person presentation of the Bombay Progressive Artists' Group, with a colorful and representative Metascape by Akbar Padamsee across from the entrance blocked by wall panels featuring a abstract film by Padamsee and two other films from the Progressive roster: one by Tyeb Mehta in which bulls for slaughter and the mourning of Gandhi precede (spoiler of sorts) the image of Nandi, Shiva's bull warrior and symbol of the human soul, a Hindu mise-en-scène of the material world paradoxically spliced with the representation of the eternal:


Also here is M.F.Husain's Through the Eyes of a Painter, a journey through Rajastan which won a 1967 Berlin Golden Bear:

Not to my liking, there were no paintings in the show after 1980, giving way to Conceptual works which agree with US art school fashions. Nalini Malani's paintings (such as the one below) are more than worthy and her video art would improve on these offerings, to name one omission hot from a high profile Chelsea show and Documenta Kassel buzz. 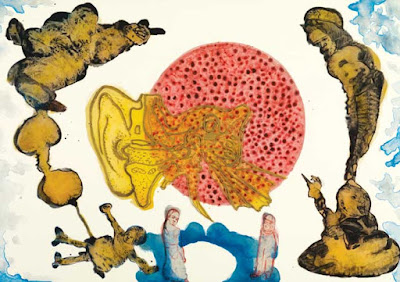 Update: "After Midnight" at the Queens Museum has been extended through September 13.
Posted by Ian Keenan at 11:49 AM No comments: