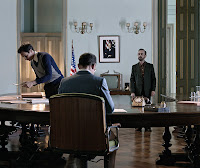 Opening Friday for a month at Zwirner is Stan Douglas' one hour, six channel film setting Conrad's Secret Agent to the sectarian violence in the period between the Portuguese Carnation Revolution and the ratification of their new constitution.

Someone uploaded Douglas' Monodramas, which "interrupted the usual flow of advertising and entertainment when broadcast nightly in British Columbia for three weeks in 1992... When the videos were aired unannounced during commercial breaks, viewers called the station to inquire about what was being sold.."

Posted by Ian Keenan at 5:46 AM No comments:

As Thaipusam was last month, I had heard this Tamil song for Murugum on the radio a while back and was much taken by its percussion parts. The DJ had taken the song from Youtube..

The Mahabharata says Murugum was a son of the Pleiades, the sisters whom the ancient Greeks thought Orion pursues through the winter sky. It would seem mythologies relating to the constellation developed independently in Mesoamerican, Bronze Age Celtic, and other ancient cultures, and the constellation was important to Mediterranean navigation, but I wonder if the importance of the sisters to Alexandrian poetry had anything to do with their empire's wanderings to the Ganges. The Balinese percussion that partially inspired Xenakis' Pléïades, like the observance of the constellation, predated the arrival of Hindu narratives there..

In Tantrism the hunter chases Shakti through the universe until sound and speech transcends thought and intuition to attain 'the transcendental level called para-vac, or "supreme speech," which is Shakti in perfect union with Shiva' (Feuerstein). These vocals backed only by percussion from last year's Thaipusam in Singapore sound good played at the same time as the Pléïades.

"If we fiddle with shadows and ignore the forms, we do not realize that forms are the roots of the shadows.. To try to head for nirvana by getting rid of affectations is like removing forms to look for shadows.. So we know illusion and enlightenment are one road.." (Layman Hsiang, 6thC)
Posted by Ian Keenan at 12:28 AM No comments:

Tuesday, Wednesday..
Posted by Ian Keenan at 7:22 PM No comments: