Posted by Ian Keenan at 3:12 PM No comments:

side
out
Posted by Ian Keenan at 5:57 PM No comments:

eyes with
out the

our lips
again
Posted by Ian Keenan at 5:06 PM No comments: 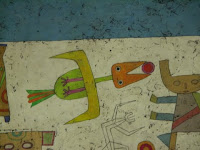 "The phoenix showed the poet a scroll which was burning to ashes. 'Do not be dismayed!' it said, 'it is your work. It does not have the spirit of the age and even less the spirit of those who are against the age: consequently it must be burned. But this is a good sign. There are many kinds of daybreaks.'"
Posted by Ian Keenan at 5:30 PM No comments: 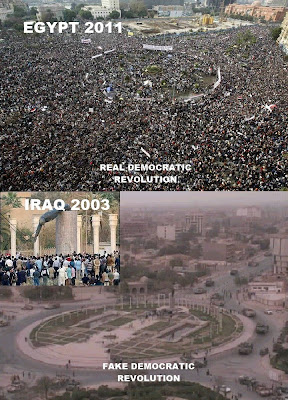 Fisk made an interesting point about the architecture of Tahrir Square:

"The truth is as symbolic as it is important. It was Haussmann, brought to Egypt by Ismail under notional Ottoman rule, who built the square as an Etoile modelled on its French equivalent, laid over the swamps of the regularly flooded Nile plain. Each road radiated like a star (much to the chagrin, of course, of the present-day Egyptian army). And it was on the Nile side of 'Ismailia' square – where the old Hilton is currently under repair – that the British later built their vast military Qasr el-Nil barracks. Across the road still stands the pseudo-Baroque pile in which King Farouk maintained his foreign ministry – an institution which faithfully followed British orders."

I can't verify that Haussmann "built" the square but for all practical purposes he did, even if he didn't come to Egypt. Isma'il Pasha attended school in Paris and upon becoming Viceroy set about to Haussmannize Cairo after visiting Baron Haussmann during the Universal Exposition of 1867. Although historical Mamluk architecture was razed, Isma'il's plan wasn't so much to replace the existing streetscape but to expand Cairo westward to the Nile. Urban planner Pierre Grand was brought in and Bois de Boulogne designer Jean-Pierre Barrilet-Deschamps designed the Al-Azbakiyyah Gardens, but the project was supervised, ironically, by one Ali Pasha Mubarak. This coincided with the construction of the Suez Canal, a time when European diplomats and businessmen became more interested in Egypt and Isma'il sought to accommodate them. Though tourism hadn't become an industry, the preservation of Islamic Cairo was justified for religious reasons and, like the Latin Quarter in Paris, the pre-Haussmann Khan el-Khalili in the Islamic quarter, memorialized in Naguib Mahfouz' Midaq Alley, has became a focal point for tourism. Borrowing money from Europe to make Europeans feel at home resulted in Britain and France being granted the demands of large tracks of Cairo land and all of Egypt's shares in the Suez Canal in exchange for its debts. 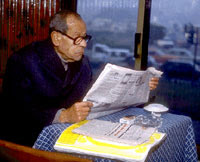 The grand boulevard's suitability to modern military control and the debt and surrender of the Canal caused by Tahrir (Liberation) Square's construction make the current public revolt, facilitated also by the central plaza of Twitter and Facebook, somewhat of an urban planning boomerang. Mahfouz, a critic of Mubarak and his predecessors, would look out at Tahrir Square from his breakfast table at the Ali Baba Café.
Posted by Ian Keenan at 4:39 PM No comments: 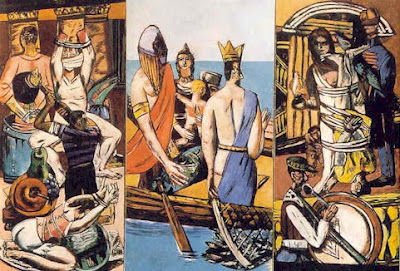