When I couldn't decide what to get someone as a gift, I would give them a new factory cassette of Velvet Underground starting with "Candy Says" which was available inexpensively at the record store. Everyone I did this for disliked the album. Everyone I know who bought the album liked it.

I had a phase where I listened to Metal Machine Music almost every day, on CD. I would make it through a record side equivalent and a half, usually. I did make it all the way through a few times. It relaxed me. "..the all-time guaranteed lease breaker. Every tenant in America should own a copy of this album... MMM is Lou's soul.. the greatest record ever made in the history of the human eardrum."

In Croatia and Bosnia before the war the information ministry hanging on to Tito's Yugoslavia played "Dirty Boulevard" over and over as anti-capitalist propaganda, everywhere you went, grocery stores, post offices. I thought "Cool. Lou."

In an interview he said "There's nothing more boring than an ex-Catholic and an ex-drunk." I was trying to quit at the time (the latter) and was far from doing so. I recall only venting about the quote to one person once. It didn't actually delay my quitting so much as Pessoa's "Your poems are of interest to mankind; your liver isn't.. Bless your poems and be damned" may have added 4-5 months to the festivities. He returns to the Catholic theme vis a vis Warhol...

on that album I learned who Valerie Solanis was in perhaps her most unflattering introduction of all.

Even as Nalini Malini produced her own video of her "In Search of Vanished Blood" installation, an immersive eleven minute loop at Lelong, seeing it in person (til the 26th) is most recommended as it affords the viewer different scale and framing as well as a more varied play of images --

Malini cites as formative being a Hindu refugee from the partition of India born in Karachi, Pakistan, "Cutting the country on religious lines was terrible in itself, but more terrible because they left behind a tool for further cutting, for the right wing to do whatever they like... And under the guise of communal problems, construction companies join hands with fascists to destroy the slums, in places where everybody was living together in complete harmony. So under any excuse this thing starts up... It’s all part of the business of greed. And it’s not about the Hindu-Muslim conflict."

The tradition of shadow puppetry referenced by Malani is believed by some to date to the city of Harappa in the Pakistani side of the Punjab before the Aryan invasion in the 2nd millennium BC as well as in Bengal during that time, and has for thousands of years been used to enact the Hindu epics of the Mahabharata and Ramayana throughout India, migrating to Hindu communities in Java and Bali in Indonesia where it has retained its intensity. Miguel Covarrubias recounted in the 1930s "in Java it is a rule that the men look at the puppets while the women see only the shadows" around the time when Artaud observed during Balinese dance "the stratified, lunar eyes of the women. The dreamlike eye which seems to absorb us and before which we ourselves appear as phantoms." The inspiration for Malini's voice over is Christa Wolf's novel Cassandra, in which the mythological story is narrated by the prophetic daughter of Priam... "like Cassandra, we have Sahadeva in the Mahabharata. He knew the future but he needed to be asked... Which is what’s going on now. It’s like we’re cursed – we can see, we know what’s going to happen, but we’re frozen."

Covarrubias observed "travellers.. cannot understand why the great crowds sit listening with profound attention to the plays that do not end before dawn.. Every object and every move of the marionettes has symbolic significance.." Malani's shadows are wrested from narrative contextualization to intermingle, similar in manner to Bhanu Kapil's 2011 memoir of Indian partition Schizophrene, initially inspired by Ana Mendiata's silueta works and conceived as an epic until she threw the final drafts into the snow and retrieved them months later "I wanted to think about hallucination: the organization of acute matter. The capacity of fragments to attract, occur, re-circulate or shake (descend): in play." In both works, the imperative of describing the aftermath of partition seems to have demanded their final forms.

William Kentridge, who also utilizes shadow puppetry in videos like this one featuring his Ubu sketches

has a show of videos, sound sculptures and drawings of trees at Marian Goodman til the 26th, plus his "Felix in Exile" is still being projected in the contemporary rotation at MoMA, where at the "Soundings" show Jana Winderen's decontextualizing takes the form of using underwater microphones to gather sounds of creatures in the ultrasound range "above the hearing capacity of humans but in which many mammal and insect species communicate.. sounds made by.. bats, fish, and underwater insects and (pitching) these transmissions down to the human range" then mixing them together. (til Nov 3)

Boatswain Pettibon's offerings at Zwirner (til the 26th) are made up to resemble an early 80s studio with the bo's'n's 2013 prices, like 75K for a work on paper which says "Allowance $55,000," so I suppose you old schoolers who'd go vinyl shopping when the SST catalog came in the snail mail were making sound investments.

Piri' Miri Muli' readers should have no difficulty discerning what has drawn me to MoMA recently, and the Magritte show covering in about a half dozen or so rooms the period between his first Surrealist paintings of 1926 to 1938 is no disappointment, presenting many works from private collections as well as works on paper that one rarely sees even in reproduction.  I once took a bus from South Jersey to Montreal to see a Magritte retrospective, sponsored by the Oldsmobile Aurora "Ceci n'est pas une Oldsmobile."  The Greyhound ride was as you would guess horrible as we had to get out several times in the middle of the night and I got no sleep while my wingman got one hour, thus being more tired when we went straight to the Louise Bourgeois show at the contemporary museum and so when a crowd of art students sat around the video of Louise in her kitchen "you think my anger is fake?!  Really?!  Is this fake?! (breaks dishes) Is this fake?! (break more dishes)" he was snoring even louder than the audio.  But as most of Magritte's classic themes were introduced in these early years this (til Jan 12) is a joy, also traveling to Houston's Menil and the Art Institute of Chicago...

a focus that documents his thought process during his formative years, like his "The Light of Coincidences" with a candle representing the illumination of Lautreamont's "beautiful as the chance meeting on a dissecting-table of a sewing-machine and an umbrella," using ordinary objects rather than abstractions or imaginary creatures in a saṃsāra equals nirvāṇa approach, in his words: "a woman's body floating above a city was an advantageous substitute for the angels that never presented themselves to my sight." This subject matter and the hard edge composition cited in Magritte (whose lifelong emulation of de Chirico extended to his own Reubens phase) was what prompted Arthur Danto to call Surrealism 'retrograde' - forgetting of course Ernst's influence on everything he feels compelled to like - that I sometimes like to, well, I'll let Breton take this one this time (1937): "Those who speak disparagingly of Magritte's 'imagery' and reproach him for going against the grain of contemporary 'researches' in the plastic arts should beware: they are simply revealing the limits of their own intelligence.. the absolute scrupulousness of the kind of concrete figuration.. preserves the great semantic bridge which allows us to pass from the proper meaning to the figurative meaning and conjugate these two meanings in a single glance, with the aim of achieving 'perfect thought,' that is to say, thought that has achieved complete emancipation." 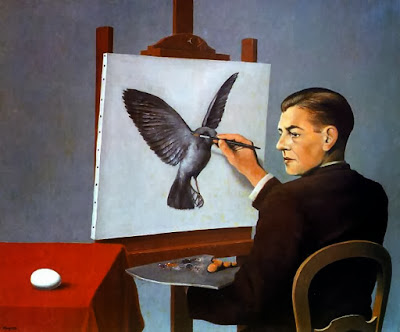