For this week's edition I have an image from "Jean Dubuffet: The Last Two Years" (Pace, 510 W 25th St, pdf) for every stanza break in Wallace Stevens' "Metaphor As Degeneration":

If there is a man white as marble
Sits in a wood, in the greenest part,
Brooding sounds of the images of death, 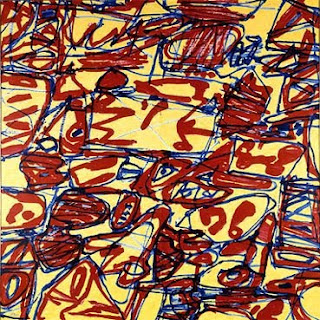 So there is a man in black space
Sits on nothing we know,
Brooding sounds of river noises; 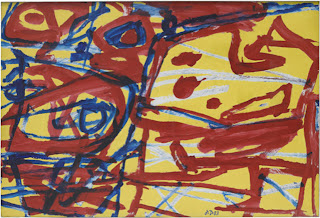 And these images, these reverberations,
And others, make certain how being
Includes death and the imagination. 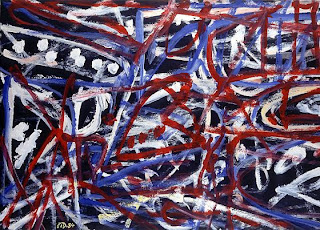 The marble man remains himself in space.
The man in the dark wood descends unchanged.
It is certain that the river 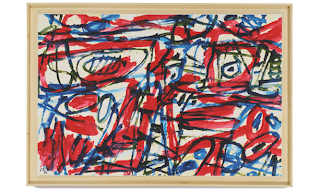 Is not Swatara*. The swarthy water
That flows round the earth and through the skies,
Twisting among the universal spaces, 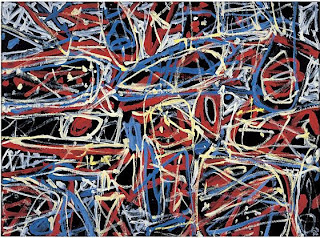 Is not Swatara. It is being.
That is the flock-flecked river, the water,
The blown sheen - or is it air? 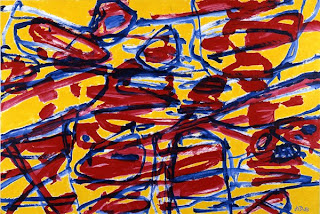 How, then, is metaphor degeneration,
When Swatara becomes that undulant river
And the river becomes the landless, waterless ocean? 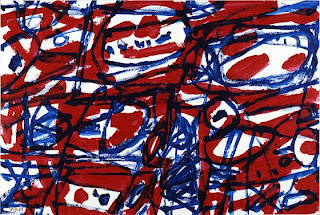 Here the black violets grow down to its banks
And the memorial mosses hang their green
Upon it, as it flows ahead.


Dubuffet: "These paintings were intended to challenge the objective nature of being (être). The notion of being is presented here as relative rather than irrefutable: it is merely a projection of our minds, a whim of our thinking. The mind has the right to establish being wherever it cares to and for as long as it likes. There is no intrinsic difference between being and fantasy (fantasme); being is an attribute that the mind assigns to fantasy. One could apply the term ‘nihilism’ to this challenge of being, but it is reverse nihilism, since it confers the power of being on any fantasy whatsoever, given that being is a secretion of our minds. These paintings are an exercise for training the mind to deal with a being that it creates for itself rather than one imposed upon it.

"The mind should get rid of the feeling that it alone must change while being cannot change; the mind will train itself to vary being rather than varying itself, the mind will train itself to move through a space in which being is variable and never anything but a hypothesis, the mind will practice using its ability to provide its own fulcrums wherever it wishes, it will learn to rely on illusion, to create the ground on which it walks. The mind will learn how to move through all the various degrees of being, and it will feel at ease when being is undependable, flicks on and off, remains potential, and sleeps or wakes at will. Being and thinking are one and the same."

* This river, located north of Harrisburg, PA, appears in both "The Countryman" and "Metaphor as Degeneration." In both cases, it is intended to represent the real, physical, actual world over and against abstractions of the mind that are expressed in metaphor. [Rhodes]
Posted by Ian Keenan at 2:14 PM 3 comments: