One of the things I love about Neo Rauch is that no one really knows what to say about the paintings, as the terminology that permits some to make definitive statements without actually having to think is rendered useless. The Zwirner show runs through the weekend.

My thoughts, which you may skip over to look at the actual paintings: The circle over the woman’s head in Das Gut seems to reference medieval depictions of the Holy Mother, as the repetition of the three foregrounded personae in the garage suggest episodic frescos from the same period. The mermaid is another archetype and the guys with no legs evoke the guy standing behind the billiard table in Van Gogh’s the Night Café. Past utopian ideologies seem to animate the characters on the right of Entfaltung, the man being dressed in
Krönung I, and the bureaucratic women with the flags in Die Stickerin. Daniel Richter, whom I intend to comment on here shortly, also uses images suggesting past utopias and female archetypes like Susanna and the Elders and Ophelia that suggest tragic outcomes of society. Die Aufnahme is a delightful illustration of ‘traditional Germany,’ especially rewarding is the expressions on the faces of the guys mixing ‘the white stuff’ (and the guys being held in place by the matriarch figure, who seems to be sitting in a bucket as a young girl) in response to the guy who breaths fire. The time image is kept on the ‘infinite’ setting as is the dramatic situation, the interplay and identity of the characters, and as with D. Richter (& Polke), the abstract expressionist and psychedelic elements create an infinity of stylistic approaches. 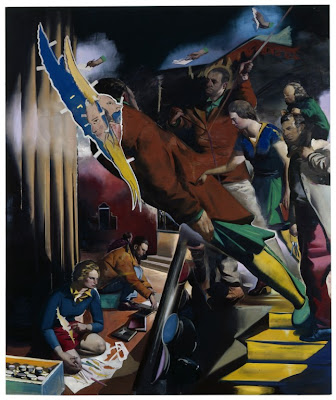 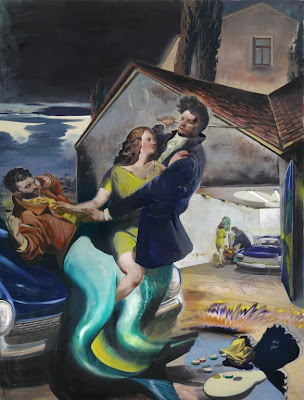 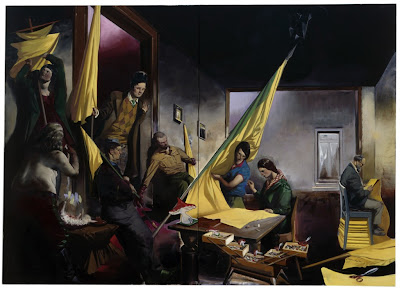 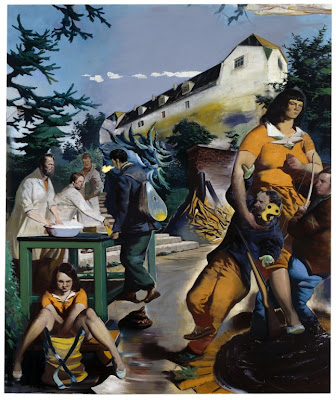 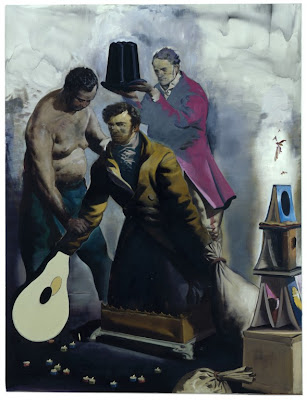 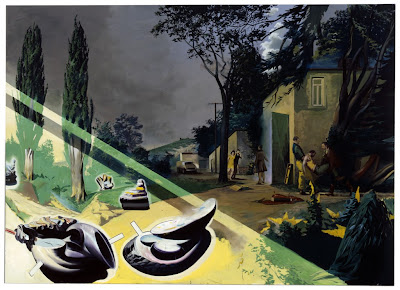 I didn’t see Zhang Huan at the Guggenheim but the woodworking at Pace Wildenstein til the 25th should answer any wavering thoughts that he is a mere "installation showman": woodworking like I’ve never seen.

New on DVD: Truffaut's Stolen Kisses suddenly came out without prior warning, a welcome surprise.

The gold standard of presidential election blogs, Al Giordano's, has moved to his site of unmatched Latin American reporting due to insidious editorial intervention.