In 1996 the Rotterdam Conservatory released a CD of Cuban Contradanzas and Danzóns which quickly became for me, a longtime Cuban music enthusiast (I, II), part of my daily bread. The album was inspired by a concert by the Orquestra Típica, a folklore/ preservationist initiative, in Santiago de Cuba in 1994 which led the producers to search for sheet music of any 19th Century Contradanzas or Danzóns, of which they only found 28. The music, a precursor to both New Orleans and Afro-Cuban Jazz, introduces a slow, melancholy melody honed for full effect over centuries that becomes uptempo at the close.

The music most certainly comes from the "country dances" of Southwest France, with horns brought to what is now Haiti when Louis IV was persuaded in 1685 by his ardently Catholic mistress Françoise d'Aubigné to lift the Huguenot King Henri IV's 1598 Edict of Nantes, which had ended over 30 years of the Wars of Religion, prompting a Huguenot diaspora to far flung places in the world including what was then the colony of Saint-Domingue. In the 11th Century, the patronage of the troubadours by Provençal nobility came when the region was loosely controlled by House of Barcelona, Catalan being more similar to the Provençal Occitan than French. Ezra Pound notes in Canto VIII how the first troubadour poetry is indebted to Arabic music from Moorish Spain. The Albigensian Crusades of the early 13th Century cut Provence off from Catalonia and caused troubadours to flee from the region in all directions. 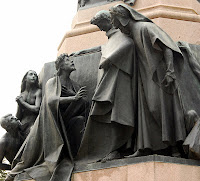 Sordello da Goito, who wrote in Occitan despite living in Mantua of Italy's Lombardy region, spent those years in Spain and Portugal along with many other troubadours. Dante had Virgil (also a Mantuan) bow to him (memorialized in stone in Trento, right)*, Browning penned about him the epic of which Pound would begin his Canto II "there is only one..", asking in the first published draft of Canto I "What's left for me to do?" Stuart McDougal wrote: "For H.J. Chaytor (whose works were well known to Pound), Sordello was an important poet largely because he represented a transitional stage between the Provençal and Tuscan views of love. In his poetry love has become 'rather a mystical idea than a direct affectation for a particular lady: the lover is swayed by a spiritual and intellectual ideal, and the motive of physical attraction recedes to the background. The cause of love, however, remains unchanged: love enters through the eyes; sight is delight.'" The theme of unrequited love in this verse of his was common for its time, and may have helped lay the thematic foundations for later genre of the region like Fado. ("If only it pleased her, with her consent,/ to grant me some hope of mercy from her,/ whate'er the pain which I may feel/ she'll hear from me no plaint.// Alas! What good are eyes to me/ if what I want they do not see?"):

Alfonso the Wise of Castile sponsored troubadours in exile, utilizing their techniques for religious music. The surviving manuscripts of the Cantigas de Santa Maria (1250), from his court, document a range of instruments found later in Huguenot Contradanzas, of which many were of Moorish origin, including early forms of trumpets, clarinets, and string instruments. The Huguenot Protestants arose in the 16th Century out of the influence of Luther and Calvin and disenchantment with French rule, forming strongholds in the Beaune region, East of the Basque region and North of Catalonia, as well as scattered towns like Bergerac, Montauban, Agen, and Figeac. It was around this time that Sardanas were believed to have been first performed in Catalonia, with instruments and melodies similar to the Contradanzas:

Relocated in what is now Haiti, the Huguenots came to lord over the colony's cultural life, and their instruments and compositions became popular amongst the African slaves who, to the delight of the Huguenots, added African-derived aspects to the rhythms, but between the slave insurrections of 1791 and the division of the country in 1807, all French settlers had to leave the island, and many relocated, along with their slaves, to Santiago de Cuba and New Orleans, leading to the popularity of Contradanzas in both places. Around the time of this migration, the first notations and records of Contradanzas are found in Santiago, with the first evidence of this music in New Orleans dating from the mid-19th Century, where in Congo Square Haitian Vodou drumming became a regular feature, its more sacred practice moving underground due to touristic attention until it was banned altogether by Louisiana's Black Codes. Maya Deren wrote how Vodou drumming is not improvised and that Haiti, also, banned the drumming in places due to anxiety about Vodou and possible rioting. Louisiana's ban may have been what severed the United States' historical link to the rhythm-keeping ensemble of Afro-Cuban percussion, paving the way for the solo, individualized styles of percussion that led to Blakey, Roach, Braxton, and Murray. The horn melodies of ragtime, however, that developed in New Orleans in the late 19th Century can be heard in Contradanzas.

Although musical notations in Spain have been found going back to the 8th Century, there was a discernably different approach between those to the North and East who after Monteverde, Vivaldi, and Bach produced notations for posterity and the Iberian belief in music functioning for a performer and audience in the moment, as described by Lorca: "All the Arts are capable of possessing duende, but naturally the field is widest in music, in dance, and in spoken poetry, because they require a living body as interpreter - they are forms that arise and die ceaselessly, and are defined by an exact present. Often the composer's duende passes to the interpreter." Contradanzas and Danzas went through several stages of development, transformation, and stylistic controversy in three countries before any of it began to be written down. 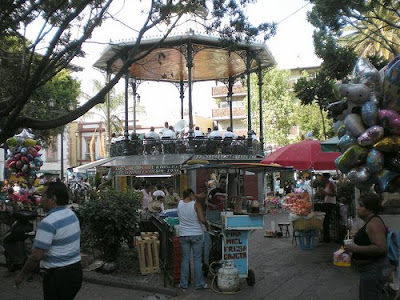 The Rotterdam Conservatory's unsigned liner notes say "The greater part of the (Orquestra Típica de Santiago de Cuba) consisted of septua- and octogenarians, and on hearing them perform, I realized that with the death of these musicians this music would probably disappear." So thought I, but I was wandering around one predictably warm night in the City of Eternal Spring, Cuernavaca in the State of Morelos, Mexico, when walking to the North of the Plaza de Armas I heard a familiar melody. I had for years been listening to the Rotterdam album and also had no idea that the music was performed in Mexico. A brass band was belting out Contradanzas in the Jardín Juárez, which, on quieter evenings, relies on a community of grackles for musical entertainment in the twilight, from a gazebo designed by Gustave Eiffel (above), while about 20 couples, mostly elderly, elegantly dressed and all Mexican, were dancing in the evening air, steps for which they seemed to have a regular familiarity. I read here that Cuban Contradanzas made their way from the port of Veracruz southwards to Mexico CIty, Cuernavaca, and to the Valley of Oaxaca.**

On the "textile route" East of Oaxaca City is the Zapotec town of San Jeronimo Tlacochahuaya, called in the Blue Guide Tlacochahuaya de Morales and known locally as Tlacochahuaya, tho calling it Tlaco would invite confusion with neighboring Tlacochistlahuaca, Tlacolula, and Tlacochero. The town, 8 kilometers east of the tree with the largest trunk in the world (left) and 2 kilometers west of the ruins of Dainzu, boasts the Tlacochahuaya Philharmonic, which plays Contradanzas as part of its regular repertoire:

There are no hotels in Tlacochahuaya, and the performance of Contradanzas in Mexico is a living form, not a folkloric performance for tourists. The 2006 protests in Oaxaca, which gained the most notoriety in the US from the unpunished murder of Indymedia journalist Brad Will by a city councilman and two police officers, were precipitated by the misappropriation of 920 million US$ of the state's public funds and extremely underfunded schools, like May '68 escalating to over a million protestors after a response of police brutality. But as with the drumming in Congo Square, there arose during the protests a tension between culture and folklore: the Guelaguetza, a pre-Columbian Zapotec festival, had been taken over by the state and turned into a tourist spectacle, an irritation enhanced by the fact that the corrupt, repressive Governor Ulises Ruiz was overseeing the festival, leading to an alternate People's Guelaguetza which over 200,000 participated in.

So this is a close approximation of what the precursor to jazz sounded like in the late 19th Century, bringing to mind Lorca's meditation in that same lecture: "The dark and quivering duende that I am talking about is a descendant of the merry daemon of Socrates, all marble and salt, who angrily scratched his master on the day he drank hemlock, a descendent also of Descartes' melancholy daemon, small as a great almond, who, tired of lines and circles, went out along the canals to hear the drunken sailors sing." Witnessing the musical accompaniment for Tlacochahuaya's parade for St. Jeronimo's feast day, the Dance of the Conquest, and other performances I found, it would appear that every able bodied male in this farming town of 2,000 is a member of a brass band. Indeed, on the 17thC facade of the town's church, God himself is holding a trumpet up to St. Jerome's ear. (below) 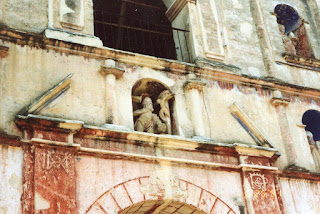 From a 50's photographic imprint of the Valley of Oaxaca: "..the great Valley of Oaxaca, justly famous for its pure air, its blue sky and its pretty countryside covered with flowers the twelve months of the year, where ash-trees, jacarindas, eucalyptus-trees and laurels of India abound. A great garden, a delightfully placid and harmonious place full of tranquility and well being, of ancient dreams and gay landscapes, and of pure poetry. There, among the meadows, sometimes half hidden in a wood, others around some hill, towns and villages suddenly appear, giving life to the countryside and inviting one to share their rural peace.

"But besides the beauties of nature, the Valley of Oaxaca, so sweet and calm, so appropriate for day-dreaming, contains History. The silence of the beautiful landscape is frequently broken by the echo of a thousand memories of its exciting past. A past situated in an almost mythical world, but amazingly rich in manifestations of the spirit and the actions of man. In this very ancient land the people carry deep inside them the nostalgia for something undefined, but which in their imagination must take the form of fabulous wealth, opulent cities and races in the fullness of their vigor. Nostalgia, indeed, for a mysterious and very remote past, full of beauty, irretrievably lost in spite of the fact that it sometimes seems that the old gods wander around here once more.."

* Sordello even gets the main square of Mantua named after him, containing the cathedral and the ducal palace, while Virgil must content himself with a Napoleonic-era piazza a block North, tho Virgil gets a statue and Sordello doesn't.

** Another link between the cities of Cuernavaca and Oaxaca is extended visits by Malcolm Lowry, who headed South from the setting of his opus to seek in Oaxaca the perfect mezcal, finding hallucinatory friends like fauns being slaughtered in the hotel dining room, vultures in his bathroom and upended turtles bleeding to death, and, in a letter, "no less than five policeman are watching me." The classic Lowry documentary is embeddable:

Volcano: An Inquiry into the Life and Death of Malcolm Lowry by Donald Brittain & by John Kramer, National Film Board of Canada
Posted by Ian Keenan at 8:51 PM No comments: 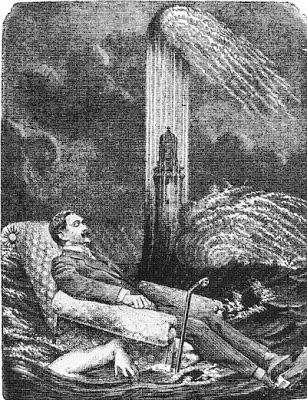 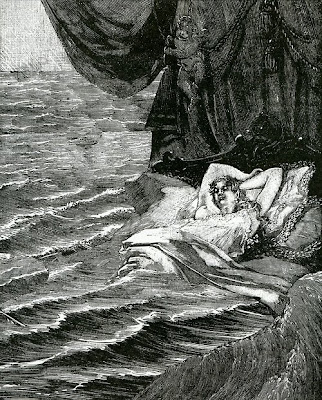