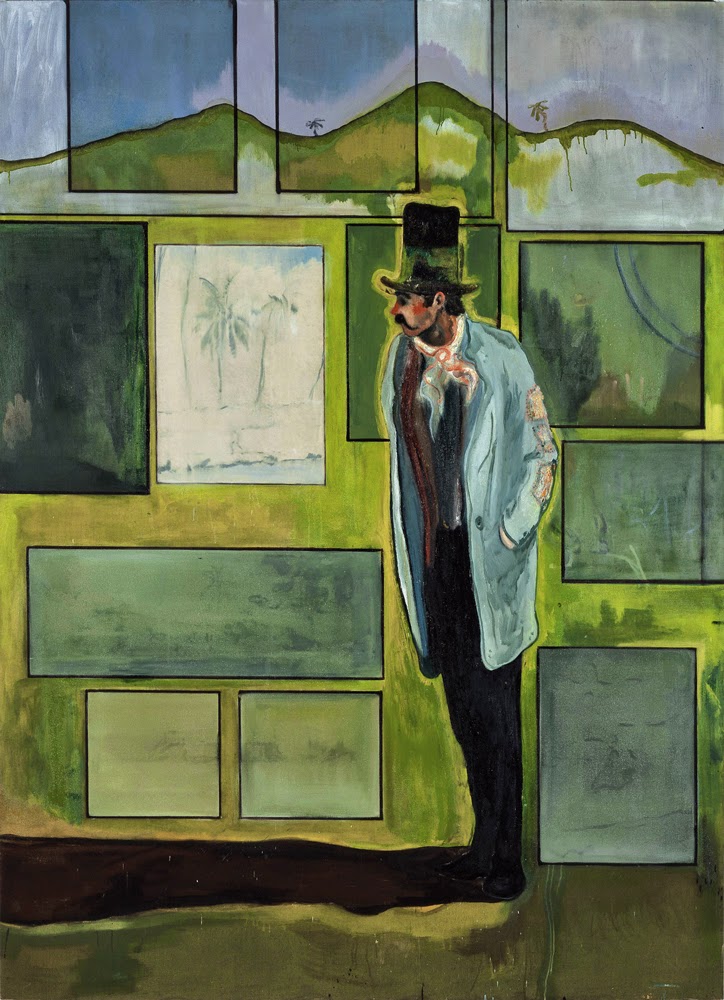 This closing crept up on me after I happened by a month ago, but Piri' Miri Muli' readers within proximity of the St. Lawrence River who haven't seen the Peter Doig show are here advised that it ends upon closing today, in the area where he spent his adolescence after the show opened in Edinburgh, the nation of his birth, headed to Fondation Beyeler in the half-canton of Basel-Stadt where readers have it for all of next winter. Seeing it in Montreal sets it against the backdrop of the landscape paintings of the "Group of Seven" which Doig internalized while at the same time seeking escape to the Royal Academy of London for punk culture and the easel masters. The German Daniel Richter, about whom the phrase "the Return of Painting" has often been used, wrote an essay about Doig in 1990, around the time that Richter, who shares Doig's passion for music and album art, was moving from abstraction to figurative composition. Richter's depiction of the figure, at times deploying an illumination suggestive of autonomous human energy, as well as landscape brush work, use of color influenced by psychadelia, and abstracted planes with a representitive function can be traced to the influence of Doig, even as Richter has taken it in compositional directions influenced differently by literature, philosophy, activism, and European master archetypes. The influence of the Group of Seven, who by choice worked oblivious to the avant-garde trends of New York and Europe, and Doig's earnest emulation of both the painterly techniques and embrace of the pre-modern of Gauguin, an influence derided by Ashley Bickerton, a graduate of CalArts conceptualism and 90's New York, in lesser practitioners as "stupid Gauguin fantasies of island life.. dollops of local color spooned on, nauseatingly obvious images of kitsch slices of exoticism," caricatured in wallpaper by Sigmar Polke, is updated in a manner that makes it central to the practice of painting in the face of photography (which Doig works from) and concept. So mounting this show of Doig's in Montreal reflects not only a civic pride in a local boy, but lets the works share the building with Tom Thomson, Emily Carr, David Milne, and others, revealing how that tradition's formal, painterly focus on nature helped revitalize figurative painting. Doig's film posters for his own repertory cinema in Port-au-Spain, Trinidad suggest that genre's influence on his work, as the various versions of Pelican (two of many below), in which a man dragging away a pelican is shown at the precise moment he sees his witnesses, employ cinematic methods of focus by highlighting, in turn, the man and the pelican, from one painting to another in a way that can only be found in painting.

That place and the Contemporain have a sampling of Riopelles up, the latter in a show on local abstraction (which actually just ended), though Riopelle found abstraction unattainable, and where the Adrien Paci show has also closed but the Albanian funeral dirge that he contracted for himself can be uploaded for today's Shavasana..

In Toronto the AGO has a capriciously rotated show of Beuys drawings, sculptural assemblages by David Altmejd that seem to get more critical attention North of the border than in these parts, and for those of you that wondered why they should go to the effort of creating a real work of art when a fake one would suffice Wifredo Prieto has placed one real diamond amidst a pile of fake ones for you to spot. 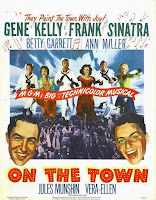 NYC: It's good to see the Werner show of small Polke drawings before and after the MoMA show as it allows contemplation of his commentary on commodities with fewer crowds, but it gets crowded too. It is bizarre at times to see all those people looking at Polke paintings (which includes youthful parodies expressing his distate for pure conceptualism) in the big show which includes his masterpiece Paganini, which I've likened to Richter's later masterpiece The Owner's History Lesson. The Gauguin show there is essential; including his original prints for the Noa Noa pamphlet and his sole casted sculpture, from someone who beheld a lot of them 'prominent' in urban settings. Also near Werner is Raymond Pettibon's surfer works on paper over the years, in which Polke-like cartoon renderings glide upon (I will not attempt surfer slang) Courbet's and Turner's dear coasts with the bo's'n's 'surfing trumps art' spieling.  The Met's SE Asian Hindu/ Buddhist show includes early Ganeshes from Vietnam, one where he is a much unadorned pachyderm, one in which he holds a horseradish and one on a sort of pedastal unusual to Indian carvings... similarly themed Himalayan works from the period in Brooklyn's holdings are still at the Rubin. Free chocolate at Zwirner.
Posted by Ian Keenan at 8:38 AM 4 comments: