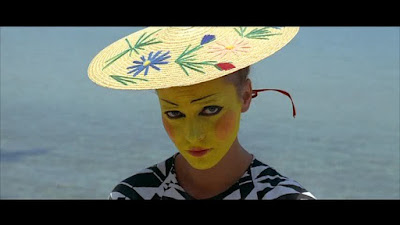 The 50th anniversary restoration of Pierrot le Fou (I, II) is onscreen in NYC, which involved the lack of a negative or an orginal sound track among other daunting problems.  During shooting in 1966 the film's finances hadn't been secured ahead of time and Raoul Coutard insisted on utilizing the new technology of widescreen Techniscope color, after the last three features (Band of Outsiders, A Married Woman and Alphaville) were b/w, which involved more elaborate lighting setups, stressing Godard and the crew, but for now you can see projected Coutard's framing of the Riviera to 'Elle est retrouvée./ Quoi? - L'Éternité./ C'est la mer allée/ Avec le soleil.' Godard's sparing use of its source novel played up whatever natural psycho-social resemblance it had to Rimbaud's A Season in Hell, prompting its protagonist to tell a cocktail party given over sit-comedically to statements of consumerism that his senses weren't integrated, to be told by the guest he talks too much, to the various direct and indirect references thereafter. 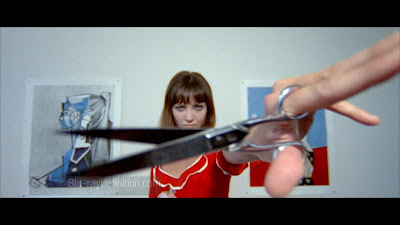 Adapting dozens of literary sources at once, not sure why or which one to settle on, would plant the seeds of his recent style, and Godard reflected that Pierrot le Fou, arising out of his despair and confusion, was 'his first film,' coming after the genre structures of Alphaville (still my favorite) and Band of Outsiders (Americanized as Pulp Fiction) .  My favorite Welles film was The Lady from Shanghai, a bitter genre film of romantic betrayal starring his recent ex Rita Hayworth based very loosely on its novel, and though Anna Karina wasn't his first choice immediately after she left him for a mediocre director, Godard is even less restrained in abandoning genre to vent this emotions through the image of his ex.   Welles' Chimes at Midnight is also arriving in restored form Jan. 1 after its distribution rights have been blocked for years, and I've only seen bootleg versions and old vhs rental copies of it.

What's up for two more days and an hour or two 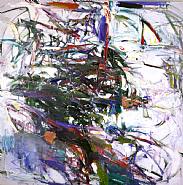 I posted hastily the other day and forgot the Joan Mitchell show, for which there's a big sign across the street from Marian Goodman while you're on your way to Matta and DAG, and the Frank O'Hara friend theme can be extended with Jane Freilicher and Joe Brainard around the corner. After her therapist tells her not to spend another summer in the Hamptons but to go to Paris, she becomes romantically involved with Riopelle and shows in several US museums  the following winter, 1959-60. They fly back to the US/Canada repeatedly and I presume Harbor December (left) is from one of their sailing outings in Long Island.  Her treatment of water, air, and boats reminds me of Monet (they lived in Giverny), and this show features her 1959 oil Goulphur I, of the lighthouse of the island of Belle-Île which Monet frequently painted in the 1870s and 80s.  Rodin described the Breton coast as "a Monet" and the Grand Vallée series of the mid-1980s  was inspired by "a friend, who recounts to her that a young cousin, on his deathbed, said he dreamed of returning to the Grand Vallée in Brittany, where the two had spent their childhood."  It has seemed to me that in her late years she painted emotional distance, of which the gaze back into childhood is one. 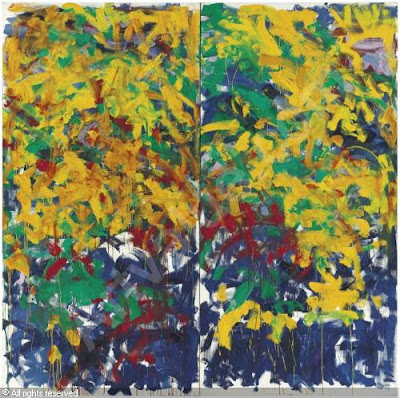 Posted by Ian Keenan at 3:10 PM No comments:

Di Donna's Surrealist show and Helly Nahmad's offering of de Chirico next door seek to view these artists through the prism of the mainstream art historical traditions of the landscape and neo-classicism, which the once-privileged de Chirico more or less willed.  de Chirico was commissioned to do a set by Diaghilev and found comfort in Cocteau's praise as Cocteau sought to get him in his camp against the Surrealists.  "Cocteau and Diaghilev, Max Jacob said, had tainted (Picasso) with their worldliness, which appealed to an inherent bourgeois streak in Picasso." (Richardson).. ..de Chirico (Memoirs): "I am very grateful to Jean Cocteau for the interest he has shown in me, but I must say I do not in fact approve the kind of praise he accords me and the interpretations he likes to put on my pictures.. even many people who are favorably disposed towards me do not understand a thing about my painting."  I am of the mind that the imagery of de Chirico's "Metaphysical" period was so neurotic and compulsive that even he didn't understand it, for which he sought correction in the ancient world of his childhood in Greece, attaching his fragile megalomania to a Classicist 'main line' of painting and theater as he was trying to win over French and Italian patrons, of which the latter were more resistant, all of which would later make for great shows at the Carlyle.


Both de Chirico and Baselitz attempt to recover their essence - Baselitz says he tries to recover artists of the past from their Zeitgeist, but the later work of the two does so through art-historical reference.  Though Artaud is perhaps the strongest influence in Baselitz, Riopelle's "Artaud yes, Picasso no" declaims the battles with dead painters in castles that the elderly Baselitz shares with the elderly Picasso.  Here Baselitz does battle with Hokusai, pairing renditions of the 18thC master's self-portrait with previously used motifs. 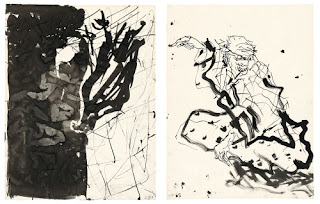 980 Madison also has the winking Elie Nadelman - Joseph Cornell pastiches of H.C. Westermann at Venus, which is showing a tendency for the one-off jokes.  The Enrico Baj show is ending too.  At 130 64th St. the absence of gallery markings on Gladstone's address befit its current contents of Pierre Klossowski's large scale pencil drawings of various Sadean hijinx, a few doors from three floors of 1990s Thornton Dial.  Gladstone's Chelsea room is filled with Tinguelies (sp?) that you can activate with your foot.


Also around here, but ending later, all Piri' Miri Muli' recommended and possibly resulting in more typing at this url is Peter Doig at Werner, Motherwell's Elegy to the Spanish Republic variations at Levy, and Julie Ault at Buchholz; Westside: Dubuffet's Art Brut collection at the Folk Museum (above); in Midtown: Matta at Pace, Torres-García at MoMA, and F.N. Souza's and Sunil Das' Indian working girls at DAG Modern - inspired but no match for Andrea del Sarto's Magdalene at the Frick.


Continuing on the theme Alban Berg's Lulu is painted with ink on dictionary pages by Kentridge, joined by Freud, Berg, Mahler, and what I think is Adorno and Schoenberg at Marian Goodman's on the 3rd floor, where Szoke has Picasso and Munch prints up down the hall.  Up a floor is the more direct theatricality of Jeff Wall.
Posted by Ian Keenan at 5:28 PM No comments:

th no
r
the