What's up for six more days..

Two excellent, politically charged shows ending this week in Chelsea, and one recently opened: Sue Williams at no. 555 w21st is the one of the three reacting to Trump’s inauguration but though she titled a 2016 canvas (not in the show) “Trump Not Funny,” the works here don’t directly reference him or cast him as a regrettable aberration from a peaceful norm but rather chronicle her emotional relation to the norm, with a large canvas bearing the inscription “All Roads Lead to Langley” (below, words at bottom) 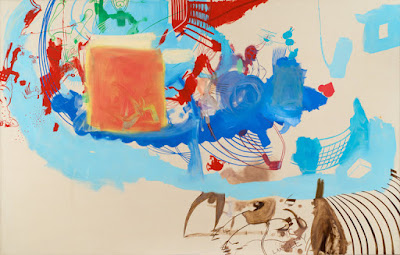 
Down 21st Albert Oehlen is using the large Gagosian space for an ATM with large, identical canvases (like Schnabel's recent show at Pace) but get up to 568 West 25th as also ending are four large paintings and other works by Shiva Ahmadi, who grew up in Iran around ‘kitsch’ Persian miniatures she hated but turned to the medium in American art school after the Iraq War invasion. Her works depict Middle Eastern hero worship but convey the playfulness of human life stained with blood.. monkeys symbolizing figures that beckon the political or religious leader with balloons that become bombs.  Also here is one of her first forays into animating the monkeys and balloons.


Up til May 13 at 515 w27th is a series of three Max Ernst sculptures from 1967 he titled Big Brother: Teaching Staff for a School of Murderers which contains Big Brother, Séraphine Cherubin and Séraphin le Néophyte, like Ahmadi conveying a distressing social order.  Down at 300 Broome in a group show there's examples of different phases of Roy De Forest's "Nut Art" through this week..

Two worthwhile shows in the Upper East Side are ending this week: (1) a collage group show at 64 e77th including two enjoyable Picassos from 1916-18, a copy of Ernst’s La femme 100 têtes, and a cleverly made Cindy Sherman film; (2) a recreation of Agnès Varda’s exhibition of photos before she made La Pointe Courte, as well as several videos of hers and assorted Vardanalia at 19 e66th, Near the Varda is early Mimmo Rotella at 130 e64th. I haven't seen Lygia Pape at Met Breuer yet but that's there.

The show of twelve Tàpies paintings at 980 Madison 3rd floor til April 22 is quite a good selection from mostly after Franco died and his works became more contemplative - I like all his periods but he entered a visionary phase from the late 1980s on.  Though I haven’t blogged about him much, Tàpies is my favorite post-WW2 painter.  Perhaps I will type more about these, but you get that I think you should see this.

Also Werner’s presentation of early Jorg Immendorff is a once in a lifetime insight into the development of one of the most influential post-war artists.  Here again I may type more, but this show demonstrates that in addition to his later works' influence on Neo Rauch, he gave his teacher Beuys the idea for chalkboard works.  Though the Beuys-formed German Student Party at the Kunstakademie Düsseldorf had already taken up changing admissions policies, Immendorf’s neo-Dada 'LIDL' action in December of 1968 in which he created a cardboard classroom encouraged Beuys while getting them in further hot water with the administration, after which Beuys allowed all rejected students into his class which led to his dismissal two years later, 4 e77th til May 13.
Posted by Ian Keenan at 9:59 AM 1 comment: