sss
ever
ed it i on
land it-see

sss
peak
ing-o
i am)

id
dice(e
Posted by Ian Keenan at 7:14 PM No comments: 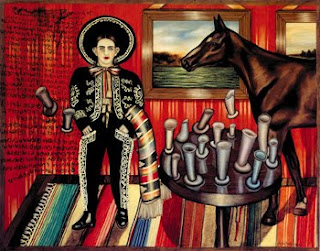 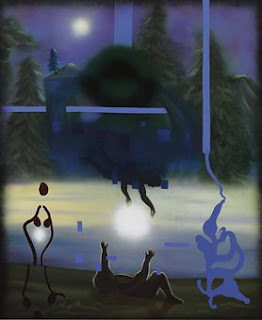 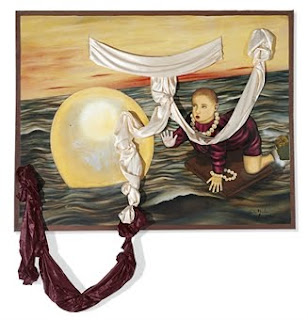 Julio Galán's show at the Mexican-owned Ramis Barquet (532 w24th, til July 9) is only 14 paintings, full of a tortured lyricism that rewards comparisons to a Cavafy sonnet. So taken in by this appearance of no comparisons too unfortunate am I that I've made up lineup cards for the Neo-expressionism - Venetian Renaissance masters game:

OK, perhaps that's a one-sided game but my point seems to be that while the prolific get on base frequently (1-3 spots), the enigmatic master (batting cleanup) drives the metaphorical art ball further out by a combination of impenetrable subtext and a rethinking of painterly form. Piero della Francesco and Anselm Keifer are both pennant race acquisitions, btw. Though, as I said, small, this is Galán's first gallery show in New York since 2001, and since he hasn't had a museum retrospective since 1994, this is a show you don't want to miss. Galán's posthumous website is also quite good whether or not you can make it to the show.

On 24th the Salvatore Scarpitta tribute should be checked out at Boesky, 509, til June 18. 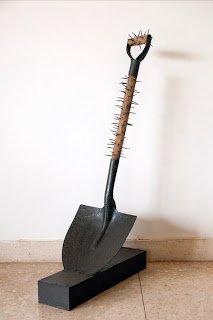 Marlborough's "Living in Havana" show (525 w25th, til June 18) features a series of conceptual works by Ernesto Rancaño, known around the Caribbean for his exceptional "baroque" paintings. At a show of Cuban art at the UN Office at Geneva in 2005, two nudes were taken down out of Rancaño's paintings, at which time the curator asked him to create a work for the International Labor Organization headquarters. What he came up with was "Noble ser" (left), a shovel covered with thorns, leading to the development of the other conceptual sculptures in this show including a ladder with thorns on it called "Ascension," a rope to escape being a figurine in a suit perched high on an obelisk called "The Escape," a phone with the earphone and microphone on opposite sides called "Wordless," and a horseshoe with a microscope on a man in suit.

Tony Shafrazi (544 w26th, til July 30) has some of the orignial R. Crumb drawings for Kafka for Beginners, amongst other things a graphic pep rally for writing in solitude, and quite a lot of Soviet film posters with Potemkin, Earth, and Man With the Movie Camera on a continuous loop. Kafka quotes found elsewhere: "Writing is utter solitude, the descent into the cold abyss of oneself." "I need solitude for my writing; not 'like a hermit' - that wouldn't be enough - but like a dead man." "one can never be alone enough" “It is not necessary that you leave the house. Remain at your table and listen. Do not even listen, only wait. Do not even wait, be wholly still and alone. The world will present itself to you for its unmasking . . . in ecstasy it will writhe at your feet.”

Louise Bourgeois (Cheim & Read, 547 w27th, til June 25) features works of the past decade made out of discarded fabrics, which freed up her color palette and made for other creative re-thinkings to surprise even to those who think they've seen all the LB combinations.

Speaking of fabric shows, Philly has Sandra Hicks this summer at ICA of much greater fabric scale, a fabric scale rarely scaled, with comparable artistry, til Aug 7.

Of course the John Richardson-curated "Picasso and Marie-Thérèse" show at Gagosian (522 West 21st Street, til July 15) is up, the third of what has happily become an annual tradition, and though at 80 works smaller than the "Mosqueteros" extravaganza (sob pout sob), the wide variety of materials makes for a feast even for those who've seen their fill of Marie-Thérèse stone heads and portraits. Uptown Gagosian features Arshile Gorky (980 Madison til July 1), around the corner from Baselitz' work from the 60s (Werner, 4 e77th til June 18). 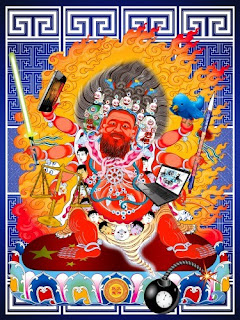 I enjoyed Kenneth Tin-Kin Hung's parodies of the 2008 US presidential election, but his 10 new digital prints inspired by the Chinese Jasmine Revolution of the past few months provides a rare glimpse into the Chinese resistance, at Postmasters (459 w19th til July 9). Revolutionary dissident Ai WeiWei can be found on one digital print imprisoned in a logo of a chrysanthemum extract powdered drink and as the Buddhist god Guan Yin in another (left). A running theme is the Great Firewall of China, internet censorship including a ban on the word "Jasmine," which is expressed here both in the digital prints and a ping-pong table with the Great Wall in the place of the net. If you go as you should, take the brochure at the entrance in with you which explains the symbols and dark humor of each work.

12a. In the City of Sylvia (2007, d: José Luis Guerín) came out on dvd last week, and I hadn't seen it before though it has had the keyboards buzzing. I had just re-watched L'Eclisse, which is clearly an influence on Guerín, who avoids the gravity of Antonioni's subject matter in favor of the sights and sounds of the street, that full opening up to the faces, footsteps, reflections and shadows as in Jeanne Moreau's Milan encounters in La Notte or Monica Vitti's Messina stroll in L'Avventura. In the City is so referential that it seems to me like a second-gereration exercise rather than a strikingly original film, but this opening up to the particulars of the frame and soundtrack is so pleasurable and such a stark contrast to other current fare as to merit its cult status. The Rohmer influence also comes through very clearly, especially the third episode of Rendezvous in Paris in which "the painter" follows "the young woman" around the Marais after adjourning his date with "the Swedish girl" at the Picasso Museum. The knot in the back of the hair of this woman in the café presumably refers to that Anglo-American classic of the fixated male in urban romantic pursuit, Vertigo..

Though Antonioni said "the female consciousness is the best filter of reality I know," Guerín, like Rohmer in the Rendezvous episode, centers the film around the male consciousness. William Arrowsmith explained Antonioni's quotation "women provide less impeded access to the realities suppressed by the Faustian organization of the world. Since the actual structure of the Faustian world, especially those in Italy of these earlier films, is a male affair, and since Antonioni has mostly depicted male intellectuals - architects, writers, art critics, even stockbrokers, all of them clearly Faustian intellectuals insofar as they are manipulators of abstractions - his men exhibit fairly consistent traits..." Perhaps coincidental or not is a factor that I don't think has been touched on much, the narrative structure of In the City's debt to Goethe, about whom Guerín made an earlier seven minute short (in the extras) called In the City of Lotte. At the age of 21 Goethe lived in Strasbourg, the City of Sylvia, where he was introduced to German folk songs by the slightly older Johann Gottfried von Herder, and fell in love with the country girl Friederike Brion, about whom Goethe's folk song Heidenröslein was written:

..so if In the City seems to me at first to take the atmosphere of Antonioni while forgoing the master's use of these forms to reflect on the "Faustian world," it returns to a pre-Faustian male consciousness of one who did perhaps the most to decipher that world. 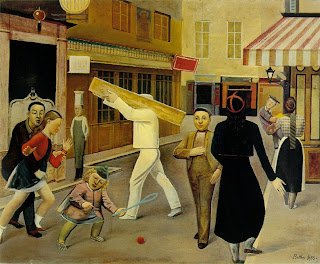 Update: Also, Balthus seems to be a big influence: both the portraiture and the street scenes, in which guys are constantly carrying things across the frame.
Posted by Ian Keenan at 2:56 AM No comments: