re: Dubuffet show: Will to Power ( Volonté de puissance ) could be released from the Guggenheim storage every election year, or saved especially for this one.. 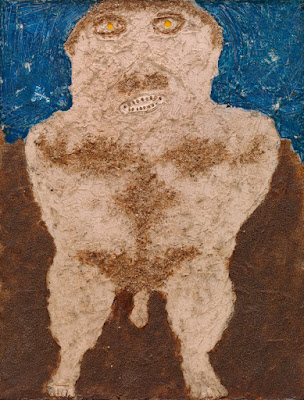 Lelong in Chelsea affords the opportunity to see works by Cuban Cubist Amelia Peláez but Gary Nader has, I'm certain, the best overview of Cuban art in town, up for a few more days (less certain), at 24 w 57, including a José Bedia depicting St Lazarus who is likened on the island to Babalú Aye, a Yoruba orisha, surrounded by soldiers and artillery of an unknown army; a Wifredo Lam, Manuel Mendive, and many others. There are actually two Mendives up in the hallway where people line up for performances at the Rubin (to follow up a wonderful room of recent works at Robert Miller a few months ago), and the actual lines there can enact the indifference to one of Cuba's most famous living painters in the US ushered in by the anti-Castro exiles, but there is no such indifference for the maestro babalao here at Piri' Miri Muli'! An NYU site has a 14 minute clip of one his Havana processions and this one has additional footage:

Speaking of processions, Terrence Koh dreamed of a bee chapel and recreated it at 212 Bowery til July 1; this figure was carried to the opening: 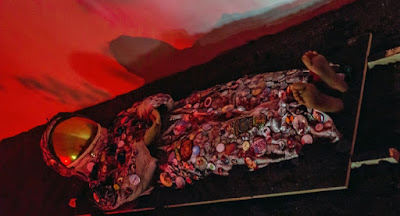 ..whle Mario Merz is at 257 Bowery. Back at the Gary Nader elevator, Gerhard Richter's show is all abstract, including drawings, save for paint squeegeed onto photographs of landscapes and gallery interiors, similar to G. Richters seen before. I just saw the dvd where a historian said he 'grew up' as a painter in 1985 (when his work gets more repetitive, self-satisfied and expensive) and he has a scale model of Goodman gallery to better decorate with a track record. 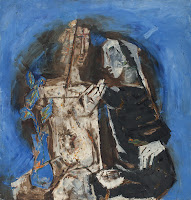 Fazal Sheikh's 'Independence | Nakba' pairs Israeli faces with those of Palestinians of the same age, and there's early James Turrells there.  DAG's Masterpieces of Indian Modern Art has a Avenash Chandra canvas of the Himalayan Raj resort Shimla to go with several Husains (right) and Souzas. Throckmorton has stone sculptures from the State of Guerrero. Through June 6 MoMA has a Jean-Marie Straub/ Danièle Huillet extravaganza consisting of the pair's prolific Brechtian readers theater style films, for those who complain about fast cutting, of Kafka, Duras, Mallarmé, Hölderlin etc.. a related show is at 88 Eldridge.  After visiting Ubu (currently featuring George Hugnet) the Hungarian woman at Andre's assured me that the cheese in the Danish (Kierkegaard's vice) was the same as in the strudels. "You wouldn't make it if it wasn't good." "I would make it but I wouldn't sell it." Life outside writing!

The influence of Giacometti can be seen in several outposts of the Upper East Side, with a quite enjoyable retrospective of Fausto Melotti which also seems to quote the sculpture of Miro and Ernst, and Cesar in Context which makes the point more directly with a sketch by the bambino from Stampa.  A few Asger Jorns can be seen nearby.  Nahmad's claim to have 'some of the most seminal' Basquiats up can be ignored but the textual theme extends to a tribute to William S. Burroughs. Werner has "the first comprehensive showing in New York" of Allen Jones, breaking a good streak the city had.  Acquavella has two floors of early Dubuffets til June 10 (best gallery show in town, near Titians at Met Breuer) including several portraits of French cultural figures.  Next door, Eric Fischl seems to be riffing Tim Eitel's large canvases of gallery goers from a decade ago but fellow Leipziger Christoph Ruckhäberle, who studied in California, seems to have riffed off Fischl a bit.

The Met Breuer's Unfinished show saves you the trip to the Eastern Czech Republic to see Titian's "The Flaying of Marsyas", Iris Murdoch's favorite painting, ("something to do with human life and all its ambiguities and all its horrors and terrors and misery, and at the same time there’s something beautiful, the picture is beautiful, and something also to do with the entry of the spiritual into the human situation and the closeness of the gods … I regard Dionysus in a sense as a part of Apollo’s mind … and want to exalt Apollo as a god who is a terrible god, but also a great artist and thinker and a great source of life”), and has several other major Titians to go with a bounty of old masters.  It's also quite a nice building once you get the Whitney out of there.  I recently visited Breuer's Central Library in Atlanta, much hated by locals and filled with edgy lumpenproles (who graciously didn't descend the spiraling central stairwell nude) and the occasional crusty librarian, characteristically poorly maintained and not stocking a book on Breuer. That, MLK's grave and the playground by Noguchi makes for its own sort of day.

Met curator John S. Guy first found out about the early 18C wooden ceremonial masks from Tamil Nadu on display until June 5 when he was at the Victoria and Albert Museum over a decade ago and after asking around and checking all the museums in India, concluded that no similar relics, typically destroyed after the ritual, existed anywhere. The owner turned down his offer then, having previously listed them at a pittance at a gallery and not finding a buyer.  The recent acquistiions include a Ganesha with a flexible trunk and a Narasimha, the lion avatar of Vishnu, with flexible arms for the dancer to tear out Hiranhakashipu's entrails (left). A room of Turners combines whaling oils culled solely from their collection and the Tate's and features Melville's handwritten citation of Turner in one of his books; one should visit Melville's personal effects in the Pittsfield, MA library if around those parts.

Back at Chelsea, a highlight is Jorinde Voigt's Jungian works on paper (527 29th), as well as Zwirner's huge travel-related Sigmar Polke feature where Jordon Wolfson's installation and Luc Tuymans can also be beheld. Anish Kapoor works out his admiration for Paul Thek from his school days at 515 24th while at 530 21 he seems to be gunning for a Rome commission after London and Chicago have been nailed down, Bruce Conner has Christian tapestries at 521 21th, Mike Kelley mostly sticks to secular themes at 530 21st, Thornton Dial paintings at 519 24th, more early Turrell at 534 West 25th.
Posted by Ian Keenan at 8:52 PM No comments:

Late this summer I will confront Riopelle's statue again, beside the Palais des congrès which though convening no congress was I believe on Shelley's mind when he wrote "the world is the provincial legislature of the poem" or was that Byron? and I will imagine it admonishing "a mass of references" about the above/ below at which time I will invoke my recurring villains: deadlines and Tom Eliot.  The second time I did this Silliman posted turkeys on his blog on April 1, which got me googling to Charles Bernstein's essay from 1999 which I read for the first time that day.  I decided I had written the first poem and had to finish up, and didn't do it for five years afterwards.  Thanks to Maureen Thorson for creating the stunt.  The first of the three series is here.