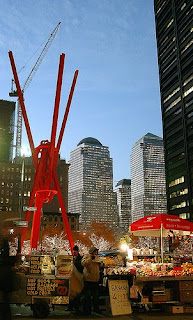 I'd never seen Liberty Plaza Park absent of Occupation, so I have no idea whether it looks large on a normal day, but it has the aura of a delightfully crowded sardine can that makes walking into a constant conversation and negotiation and will not show a yard of empty space any time soon. Hovering above it is the red, large scale sculpture Joie de Vivre by Mark di Suvero, one of the most politically engaged artists of his generation. In the 70's he said "I left the country because of the Vietnam War. We say democracy, and then the United States is guilty of something like Chile. That's incredible." Recently he reflected "The 60's scene was an idea of liberation, was an idea of struggling against this military industrial complex that's still ruling our economy." 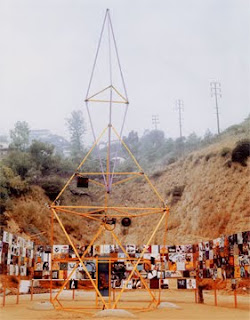 di Suvero designed the Peace Tower in Los Angeles in 1966 (left), financed by Rauchenberg and Stella amongst others, which so enraged locals that the artists had to defend it physically, with Irving Petlin at one point reduced to brandishing a broken light bulb. Participants included Guston, Golub, Spero, Hesse, Judd, Motherwell, Nevelson, Rosenquist and many other luminaries. The project was revisited at the 2006 Whitney Biennial with di Suvero collaborating with Rikrit Tiravanija, who had attempted to build a tower in Central Park for the 2004 Republican National Convention.

di Suvero recounted in 2006 why he didn't speak at the recent dedication of Liberty Plaza Park: “They’re not going to let me talk,” Mark di Suvero, 72, said genially, explosively, from his studio hard by the river in Long Island City. “Nah, they’re scared. I got arrested during the [Republican] convention for saying Bush lied. I was one of the oldest people that got hauled in. You should have seen how the cops treated the young girls.” In the city where hovers the legend of Rothko withdrawing his commissioned paintings from the Four Seasons because, as the story goes, he "believed his panels would hang in a boardroom which would be visible from an employees' canteen, that they would be accessible to ordinary office workers.." di Suvero may have wondered back then what sort of audience his sole Manhattan public sculpture would have, until this fall when the best audience he could ever have hoped for convened below it.

As Picasso's 1946 Le Joie de Vivre portrait of Françoise Gilot rose above the nymphs and satyrs by the sea of Antibes, perhaps friends or descendants of the nymphs of Matisse's St-Tropez canvas 40 years earlier (below, currently being stolen from the Barnes estate), di Suvero's figure first rose above the sculptural nymphs on the Pont Alexandre III over the Seine. It then had a brief residence at Storm King, until its original Manhattan abode on the New York side of the Holland Tunnel. I may have driven past it countless times as I like to cross at Holland and then turn left up Broadway to drive through Soho, but I am always focused on the signs and traffic patterns to get into correct lane so I would conjecture that circle is not a prime exhibition space. 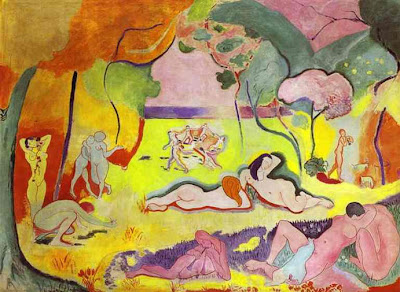 Unlike Dubuffet's nearby trees and, across the street, Noguchi's red cube, di Suvero's structure directs the eye upwards towards the skyscrapers that Ginsberg believed in the 50's were depersonalizing the city and dwarfing the potential of the individual "Moloch whose buildings are judgement!.. Moloch whose skyscrapers stand in the streets as endless Jehovahs!" This function of a figure re-sized for the surrounding buildings is in contrast to its function in Paris and Storm King (below), but these days there is no shortage of nymphs and satyrs evoking an urban Riviera in the park. It has been roped off since a misguided young Canadian recently climbed it, prompting the police to summon the hostage negotiation team. Previous to that, it was a useful conference space, i.e. "Direct Action meeting at the red sculpture," and one amateur cartographer called it on an Occupied map the "weird red thing." 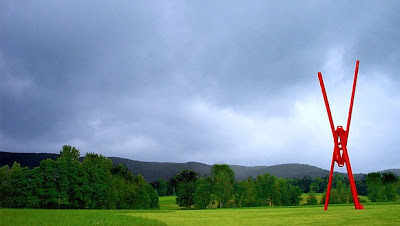 It would be interesting if di Suvero visited or participated in the protests in some way, except ... oops!.. his wife is in Bloomberg's cabinet... but luckily, as di Suvero said back in the day, "everything I have to say is in my sculptures and I'm stunned that you can't see it."
Posted by Ian Keenan at 4:52 PM No comments:

I generally don't like to write up how wonderful and can't miss shows are right before (or after) they close but .. but what? Why? alright I won't

ok this Youtube doesn't do justice to the many faces and un-faces of the Nick Cave Soundsuits so you should get in there, what a wonderful can't miss...

more on 24th: The last Lari Pittman show at Gladstone had me typing and I like this one more - here where Titian would depict a lute player in the allegory of sight tradition, Pittman writes out the names of Iberian musical forms (fado, saeta, saudade, and the more Italian pavane) to represent sound and emotion, postcards of tourist locations (Monserrat 1757, Yellowstone 1878) to represent time and space, as well as references to psychological archetypes (anima, animus) in his in his DayGlo acrylic, cel-vinyl, aerosol laquer, and gesso.

The new internationally focused C24 opened with quite a good "Double Crescent" show putting artists from New Orleans side by side with artists from Istanbul, including Skylar Fein's reconstruction of the Vertov Telegram, believed to have been sent right after the murder of Rosa Luxemborg: "Down with the scented veil of kisses, murders, doves, and conjuring tricks! We need conscious people, not an unconsious mass, ready to yield to any suggestion! Long live the consciousness of the pure who can see and hear!"

26th: Do Ho Suh crafts a model of his pagoda-like childhood home in Korea crashing into an apartment dwelling in Providence, RI. Upon entering it it looks like a model of Federal architecture from a museum, but the interior dollhouses on the reverse side intricately show contemporary use of both upscale interiors and heavy metal crash pads beset by the catastrophe of Suh's house crashing into them.

As I am the core marketing demographic for Eve Sussman's Alphaville pastiche utilizing post-industrial and oil city visuals from Northern Russia (below), I quite liked it but didn't get the memo that the scenes are randomly generated and the film never ends, so I was sitting there a while waiting to see how it ends up until a very large and loud tour group (the first I'd ever seen in those parts) provided me the opportune rationalization to forgo the dénouement and epilogue I was awaiting in vain. Quite worthy of an extended gaze if you have the time. (pdf) 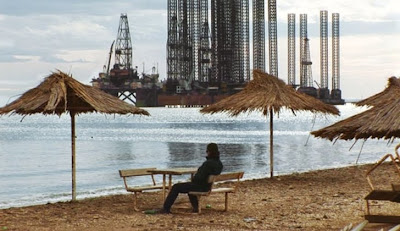 Up longer: the Black Mountain show til the 29th (chapbooks of Olson, Creeley, Blackburn, Duncan with his illustrations, plenty of paintings), Ashbery collages, Ilya Kabakov drawings (pdf), Indian masters, Lisette Model photos alongside a few drawings by Grosz, Dix and others (pdf), Fluxus.

Posted by Ian Keenan at 8:49 PM No comments:

If you haven't heard, Bloomberg wants to clean up Wall Street and he's not talking about the SEC or the Department of Treasury doing it. Using the same tactic he used to disperse Bloombergville, he wants to evict everyone tomorrow at 7am for cleaning, and afterwards no one will be allowed to take sleeping bags, tarps, "personal items," or "gear" back into the park. The campers are of course willing to do the work themselves to bring about the worldly paradise seen on my Blogger photo. (Update: The cleanup was "postponed" perhaps due to good legal advice, the 300,000 name petition or the thousands (including Joris) that joined the campers this morning, or maybe Tim Geithner heard they were going to clean up Wall Street and put a stop to it.)

In Philly, where so far Mayor Nutter has had a more simpatico relationship with the occupation, allowing, for instance, tents, November 15 is the date which is looming: plans have been in the works to renovate the area around City Hall being occupied, and though they had previously planned to start the renovation in September, I suspect the Mayor and the unelected board that controls the neighborhood is not eager to postpone the work because of the tent city. Discussions amongst the protestors as to what to do are ongoing, but the nearby Love Park cannot accommodate the tents currently pitched. It appears if the Mayor doesn't delay the renovations there will be a confrontation of some kind.

I haven't been doing much camping out in general lately and I am home now. The last two days I have been able to combine my commutes with readings of legendary writers. Cecilia Vicuña was talking tonight about Régis Debray questioning her quoting him as saying revolution cannot happen without womens' liberation, so me being me I had to rattle off a list in the Q&A of guys who did say that (in my defense, there was also a question that I eventually remembered), or at least substituting "progress" for "revolution," although "revolution" was invoked by some on this list: Hegel, Goethe, Marx, Breton, Paz (and that's just the guys).. I don't think I said Kant but I think he did say so too, and most tragically I forgot to mention Fourier! So, Fourier too, Piri' Miri Muli' readers. (Update 10/14: Rousseau, too, can't believe I forgot him) And I had never met Jerome Rothenberg til yesterday. I'm working on an essay that involves him but I didn't get into that, explaining who I was by mentioning my short essay on his blog, but I of course didn't prep about that past essay so my first interactions involved me saying "you know the Russian guy" and then we named about six or seven Russian poets til I could come up with Velimir Khlebnikov. Before I could remember the name I thought maybe "the guy who wrote Victory Over the Sun" would work, except again I couldn't remember the title so I was coming up with "Antagonism With the Sun" and so forth. I have a lot of stories like that but of course if you feel comfortable telling them all then they're not that good.
Posted by Ian Keenan at 12:05 AM No comments: