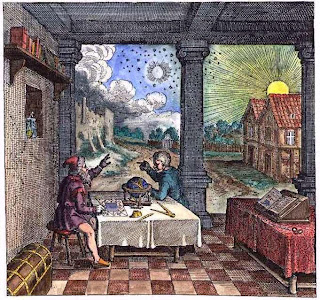 Ah the SUVs and industrial emissions that bring sunny new years like these. There was only one day a while back when before dawn I stood there thinking that the sun might not come up, because I was far from the clocks and had nothing else to obsess over but more importantly, I didn't need pity, the sun's. Kerouac and Petrarch both say that's why the sun comes up. You know it's coming when you need the pity.
Posted by Ian Keenan at 3:20 PM No comments:

I began to mention while writing about Turner's Sea Monster how the elements of the St. George and the Dragon story seem to have crossed north into the Adriatic Sea from the Ionian, combining the python slain by Apollo in Delphi (above, left) with the story line of Theseus slaying the Minotaur at Knossos (right), and how the 8th to 10th Centuriy barbarian attacks in Amasea, Turkey gave inspriration to the sea monsters slain by Venice's patron saint Theodore. In the late 17th Century, the epic figure Gjergj Elez Alia became the subject of Albanian songs which were influenced by the Bosnian equivalent Alija Djerzelez, believed to be inspired by a 15th Century Ottoman military commander of the Hungarian Succession Wars. Baloz, Gjergj Elez Alia's adversary, is alternately described as a Northern marauder and a sea monster: in Robert Elsie's translation of the ballad "Rumour was spreading and it became known that/ A swarthy baloz had emerged from the ocean" and as with the Minotaur, women are sacrificed to it until the protagonist slays it. 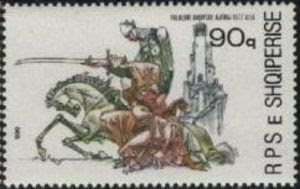 The Bosnian, Serbo-Croat language ballads of Alija Djerzelez, possibly influenced by the bugarštica tradition of ballads that have been traced to the 15th Cenutry, are no longer sung in their original form, but the Albanian Songs of the Frontier Warriors, incorporating the story of Gjergj Elez Alia, have been passed on by an oral tradition and retain their popularity. As Elsie says "While the Bosnian Slav epic seems to have died out as a living tradition, the Albanian epic is still very much alive. Even as the twenty-first century marches on, one can still find a good number of 'lahutars' in Kosova, in particular in the Rugova highlands west of Peja, and in northern Albania, as well as some rare souls in Montenegro, who are able to sing and recite the heroic deeds of Mujo and Halili and their thirty 'agas,' as part of an unbroken oral tradition. One can safely assume that these elderly men constitute the very last traditional native singers of epic verse in Europe."

For whatever reason I came upon what I believe are these ballads on Christmas night as they have just been uploaded onto Youtube in recent years. This one and this one mention Gjergj Elez Alia on their Youtube title, and incorporate the two-stringed çifteli which has in most cases replaced the one-stringed lahuta, the Albanian version of the Greek lyra that gave its name to lyric poetry. Both those videos are compelling traditional renditions of an orally transmitted vocal range, but the nationalistic significance of the Songs of the Frontier Warriors can be seen in two videos with more than 200,000 viewings, in which a pair I believe is called Beqa and Muja performs in military fatigues with what appears to be rooms filled with Kosovo Liberation Army soldiers, full of user comments celebrating the Kosovar Albanian cause.


..these songs seem to have the same melodic structure as the Gjergj Elez Alia songs..

Milman Parry's theory of oral-formulaic composition derives from trips Parry made with Albert Lord to the region in the 1930s, in which they recorded over ten thousand texts in both Serbo-Croatian and Albanian. The fact that only the Albanian songs remain suggest their cultural isolation since World War II may have played a part in preserving the oral traditions. Parry and Lord put forth the notion that repetitions of verses in Homer's epics meant that these songs could shed light on the oral tradition of Homeric poetry, which has been contested by others, but this is what remains of the orally transmitted epic in Europe.
Posted by Ian Keenan at 6:00 AM No comments: 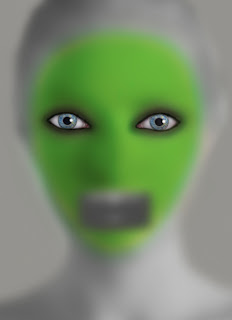 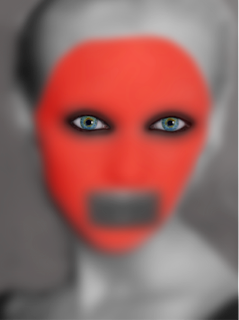 Because the Saturday gallery hours are being eliminated this weekend so that the tent cities in the urban centers can be cleared out by authorities and replaced with sculptures of a manger in a gated community with a baby in swaddling clothes, my Two Days Left column culled from wanderings a few days ago has been reduced to a One Day Left, which means you have only tomorrow to see the haunting images of the Iraqi Halim Al Karim in his NYC debut at Stux (530 W 25th), who says "the main challenge for me is to identify and stay clear of the historical and contemporary elements of brainwashing" and "nobody in Iraq hasn’t lost somebody or at least part of their own character." From the gallery press release: "During the Iran-Iraq war, Halim’s family was forced out of their home in Baghdad. Halim was unwillingly conscribed to serve in the Iraqi military during the first Gulf War, which the artist describes as, 'a fearfully lonely and harrowing journey.' Halim Al Karim soon escaped the military and sought refuge in a rock-covered hole in the southern Iraqi desert. He attributes his physical and emotional survival to an elderly Bedouin woman who brought him food and water, as well as educated him about mysticism and gypsy customs. Aided by this wise and kind stranger, the artist retreated to a deeply meditative state that enabled him to distance his memory from the atrocities of war. He emerged from seclusion on occasion, refusing to disclose his whereabouts to his friends or family for fear of jeopardizing his family and his own safety.

".... Hidden ... incorporates the Sufi concept of 'al-batin' in Arabic, one of the ninety-nine names of Allah that denotes 'truth' when recited. The series references the artist’s perspective that humanity is best preserved from brutal acts of violence when an inner focus is maintained and hidden from view. A number of works within the theme are covered with a tightly stretched sheer scrim of white or black silk; this compositional device represents a transcendental portal to the subconscious, where the serene human form latently lies protected underneath." (pdf) 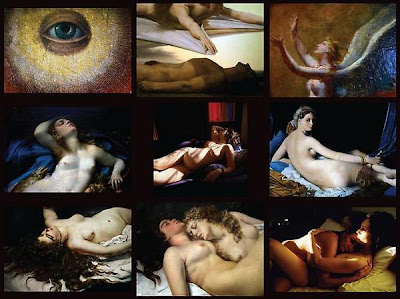 As to whether you should check out Nan Goldin's Scopophilia show (522 W 22 Street) all you need to know is that it has been banned from a Rio de Janeiro museum because of works like this one, that one, this one and that one, utilizing the Baudelarian method of juxtaposing paintings at the Louvre that she photographed during off hours with the contemporary folks from her own photographic oeuvre. Piri' Miri Muli' readers are accustomed to theoretical concepts mentioned here in passing becoming trendy in a year and a half's time but this approach more likely drew some inspiration from Chris Marker's project over the last half decade about which he noted “Cocteau used to say that at night, statues escape from museums and go walking in the streets," one painting making it into both shows. Goldin takes the technique in an expanse of directions and adds a slide show recounting the stories of Narcissus and Theseus.
Posted by Ian Keenan at 1:30 AM No comments:

to see
by day

then not so
much at night

then more
then less

not to stop
not will
Posted by Ian Keenan at 9:19 PM No comments: