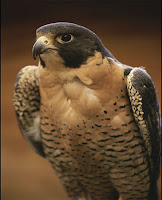 There was a peregrine falcon here for about a half hour. Passers by, oblivious to its presence, were making a fair amount of noise and it was undaunted by smaller birds flying around it, so I succumbed to the transgression of playing (for it, not me, so I thought) Peregrina on my laptop, as the Kayapó in the Amazon sing to the birds. After about a minute of the song it flew away. The song is not about a bird but uses the bird as a symbol, and the bird-symbol in the song flies away. The song is actually about the feminist journalist Alma Reed, who beat Katherine Ann Porter out for the affections of reformist Yucatan governor Felipe Carrillo Puerto, who established the first birth control clinics in the Western Hemisphere before he was murdered by "supporters of the efforts of the Yucatán's ruling class to regain the henequen haciendas and de facto slave labor they were forced to give up as a result of the Mexican Revolution" in the days leading up to the wedding. While Felipe and Alma were hiking with the poet Luis Rosado Vega, Alma commented on the scent of the nature around her, and Luis said “that perfume is because you are passing by and the earth, trees, and flowers wish to caress you,” prompting Felipe to request a poem.

More to come on Russian modernism, and thanks to Jerome Rothenberg for posting the first installment.
Posted by Ian Keenan at 1:21 PM No comments:

This much longer piece (than before) from Colombian cumbia legend Lucho Bermúdez is also probably from the mid-to-late 1950's, featuring a series of clarinet solos by Lucho to set up a vertically arranged duet with the trumpeter. More vocals here as well, from a song composed by Wilson Choperena with additional verses calling for togetherness between the nations of Colombia, Venezuela, Peru, and Panama, or at least celebrating the act of dancing with women in long, traditional Panamanian dresses in those countries, a song which has also been a hit in Peru and has been credited for spawning Mexican cumbia after Lucho's time there in the early 1950's.

Posted by Ian Keenan at 3:02 PM No comments:

Jerome Rothenberg just posted the meaty second part of a 1994 talk on e.e. cummings, ending it with an excerpt from a Navajo horse-blessing song he translated in the 1970s:

The gerundization of “boy” and “raised” reminds me of Velimir Khlebnikov's “Там, где жили свиристели (Where the Waxwings Used to Dwell),” where Khlebnikov uses suffixes and formed words to convey specific meanings, with the word “momentwill (времирей),” a word he made up which sounds Bergsonian, relating to the joined words around it: “warblewingish,” “waxwings,” “beguilish.” Russian like German has larger words than English, so Khlebnikov is using this composite diction to combine two concepts generally kept separate: time and will, the will of the past enduring, befitting his wish for an eternal present and his belief that language has been a divisive force, which he set out to resolve by way of his zaum language (pdf, p. 33), the sort of representation of cosmological unity that Foucault criticized in Les Mots et les choses.

In addition to works of his composed entirely in the zaum language, Khlebnikov uses made-up words in contexts of existing words that elaborate their possible meaning, as in “Grasshopper” and “Bo-beh-o-bi sang the lips,” assigning a non-connotive language to animals, objects, body parts, and sensory stimuli. Roman Jakobson said “The question of the interplay between speech sounds and letters and the possibility to utilize these interplays in verbal art, particularly on its supraconscious (zaum) level, vividly preoccupied me in 1912-14, and they were intensely discussed in my correspondence of 1914 with Krutchenyk and Khlebnikov."

In a way, the combination of cummings being the major figure of typographic innovation in America and that the content he used it for didn't inspire, may have had some sort of effect on the use of typographic effects thereafter. Creeley spoke of this in a 1963 interview (which I typed out for a conversation with Curtis Faville about cummings last April):

“Cummings' battle with the typographical set of the poem was one in which, once people were willing to admit typography could be variable and could have a useful effect, the particular value was lost... I like some of his earlier poems very much, both the uses of the sonnet and some of the straight wise-guy poems where you get this beautiful jargon and slang, but I feel that he's always been limited by being a real college boy, by which that his thinking, curiously, has never really gone deeper than the kind of, oh! let's say junior, sophomore, college wit... cummings, despite all his insistence on the single identity of the "i," is speaking for almost a class.”

As Creeley found cummings' content wanting, Joanna Drucker complains that Khlebnikov “was not interested in the contents of the individual psyche, but in himself as a priestly figure working in the service of profound truth,” though Julia Kristeva and Jakobson find a stylistic imprint of sexuality in Khlebnikov's frequent use of “mech-mjach” (sword-bullet) as in lines like “mecha stat' mjachom” “(Impatience) of the sword to become a bullet,” a psyche perhaps too impulsive and not sufficiently reflective for Drucker's tastes. Kristeva also credits Khlebnikov among others for the “resurgence of an “I” coming back to rebuild an ephemeral structure in which the constituting struggle of language and society can be spelled out.”

Osip Manselstam said Khlebnikov wrote “one enormous all-Russian book of prayers and icons from which, for centuries and centuries to come, everyone who may will find something to draw on.” Included in everyone are the Soviets and their more religious successors. The Soviet association most likely caused Joseph Brodsky to brand Khlebnikov taboo to the poetic foot soldiers of Reagan-era Cold War triumphalism, but a Khlebnikov revival in Russia seems afoot in the music and theater worlds that see in him a spiritual guide. The composer Vladimir Martynov was recently asked to compose a fusion piece for symphony orchestra and the Tuvan throat singing ensemble Huun Huur Tu and decided to use as his libretto Khlebnikov's creation myth of the Altay region Children of the Otter, and the work premiered in 2009. Martynov states in an interview that he finds in this Asian music and Russian traditions a model for "the end of the era of the composer," the preservation of cultures without humanist authors, a far cry from the “resurgence of the 'I'” Kristeva found in the artist Martynov is adapting.

Martynov describes Khlebnikov's vison of the “super-saga” as “the synthesis of different planes, or as in Children of the Otter, “sails.'” Kristeva describes the drama as “a mother, coming to the aid of her children in their fight against the sun. The Otter's children are squared off against three suns, one white, one purple, the other dark green.”

Also there's a splendid trailer for a new production of Victory Over the Sun, with attempts made by the editor to incorporate the visuals of Kazimir Malevich and others as well as Malevich's costumes:

Posted by Ian Keenan at 2:46 AM No comments: 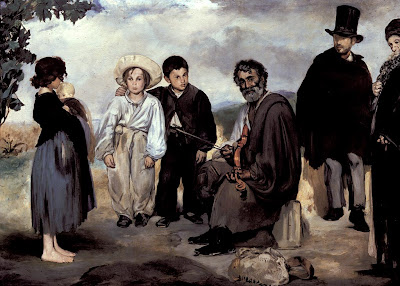 As the title of this blog used to be All About Your Caste, I think about genre from time to time, a concept that doesn't have the same traditional relation to fate as caste does. Genre is and isn't a private matter, genre is a drama of opportunities and impediments, genre is a imprint of culture and an artist's reaction to it, genre consists of models and aspirations contained within subgenre, genre consists of real limits and the perceived limits of hierarchies. The Venetian Renaissance was a moment when secular patrons enabled painting to be reimagined as limitless, something that, like Elizabethan drama, leads to the genre reaching its summit in a short period of time, the same national tradition of theater that Dennis Potter recently felt the need to circumvent by going into television. People then and now criticize Joyce for his effect on the novel, after he applied the methods of Rabelais who people didn't perceive to be a novelist. Sterne arrived at the beginnings of the British novel.

What I always liked about the comment fields as genre is people don't know what it is yet. It's not that I've wanted genre luminaries to stay away, but I thought something could happen that wouldn't happen otherwise. I have no nostalgia or specific expectations about that genre now, nor do I assume Silliman will keep the comments off or that phenomenon will resituate itself, but history doesn't support the hypothesis that reevaluation, refinement, and 'improvement' of internet discussions will do anything but suck them dry of every aspect that made them remotely interesting. The celebration over their closing by people offering their services as inspirateurs and administrators of poetry that thought they themselves could write better criticism if the comments didn't exist, that discussion will be better if there were fewer discussions, that their delicate appreciation for poetry has been violated, that the condescension expressed by some exceeded their own, indicates to me that the comment fields were sufficiently abhorrent to those that trade in these limits, models of the past that deny its essence.

Genre hierarchy is communicated acutely by these reactions. People don't say that a university press publishes a lot of crap but occasionally has an original idea, a statement that would be accurate nine times out of ten, nor is there much attention paid to religious and gender discrimination of university hiring and enrollment during the 20th Century when every avant-garde artist is being raked over the coals by the university presses for anything that could possibly be interpreted as a slur. It would be inaccurate to say I'm oblivious to genre hierarchy so much as I try to evade the traps that come with the terrain.

So it follows that I have no idea what just happened. Whatever points I made that came off as compelling and different generally seemed too obvious to me to have emotional resonance (like the existence of the avant-garde itself, until recently a discredited notion), and my floated ideas arising from sustained preoccupations have been altered little if at all by feedback. As for Silliman's blog, without question the main influence has come from Silliman himself, the reiteration and elaboration of his fertile ideas grouped largely in The New Sentence, the most important book of poetry criticism of the past sixty years, studied by many but underrated to the point that his contempt for his contemporary counterparts in the critical field is understandable.

The navigation of genre hierarchy is a creative process in and of itself and not a mass initiative responding to ideals of justice, except in situations like France's, a country where Sarkozy has maintained the Culture Ministry but is raiding the gypsy camps, a culture painted by Manet, Courbet, Daumier, Seurat, Picasso, Rouault, so on and so forth. For the first time in a few years I put on Sawdust and Tinsel last night, perhaps the best film ever made about genre hierarchy, its theater director telling the circus performers “you risk your life, we our vanity,” its bear scenes never paid for due to bad box office. The bear's not on Youtube, just an unfortunately clipped opening scene. But there's gypsies (colorful and stereotyped) in the Kirov Petruscka, and the bear arrives in the sixth minute of the third installment.

I wrote up my dream for my blog, but it was such a biting parody of me that for me to print it, whether or not I have the sense of humor to do so, would do it disrespect to suggest I could feign indifference to its brutality, or rewrite it to make that possible.
Posted by Ian Keenan at 11:17 AM 8 comments: