I don't like to have too many videos embedded to slow the download, but it's Terry Riley's birthday..

..also the news of Mills College's decision to deal with their administration's fiscal mismanagement by reportedly canceling the remaining two years on Roscoe Mitchell's tenure contract forces yet another upload in this space..

Mills Music Center Chair Chris Brown posted this month: "effective this July. I am requesting that letters of protest for this action, and support for Roscoe in his position at Mills be sent to the following administrators as soon as possible":
Beth Hillman, President of Mills College email: ebeth@mills.edu
Chinyere Oparah, Dean of Faculty email: jcoparah@mills.edu
Katie Sanborn, Chair of the Board of Trustees email: ksanborn@mills.edu
Posted by Ian Keenan at 5:28 PM No comments:

What's up for one more day.. 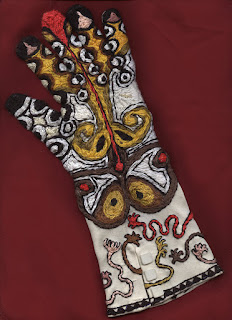 Georgina Keenan at Issyra Gallery, 300 Observer Highway, Hoboken, is entering its last day (Sunday, gallery opens around 3pm; (917) 922-2690) but rumor has it there will be a similar show there in October. I saw it rather late in the run and have been busy, but wish I had posted earlier as she not only my sister, but quite a wonderful, emotionally supportive sister, so I am quite biased. There is a picture of me at the age of two and two thirds beaming in joy when she was brought back from the hospital and my position remains unchanged.

Her take on the Tantric mandala is to make mandalas and rose windows out of Playboy centerfolds that have succumbed to her hole puncher.  Also on display are at least two of her embroidered gloves, mixed in with the work of Senagalese painter/ gallerist Issa Sow.  I saw the show after zigzagging Chelsea and witnessed the opposite of a drop-off, most impressed by both artists.

Her husband the bassist Dan Cuddy’s songwriting saw an uptick of notoriety two years ago when Yo La Tengo included “the gliding, roomy cover of the obscure “Automatic Doom” (by their psychedelic Hoboken friends the Special Pillow)" (Spin) on their Stuff Like That There cover album to go with compositions by Hank Williams, Sun Ra and The Lovin’ Spoonful.  There was a wonderful performance on the CBS site from a broadcast on This Morning, recorded and filmed by people who do that sort of thing for a living, but I can’t find it now and am left with someone who turned on their phone at Loew's Jersey Theater..

Also I found at least two DIY internet covers, of which this one is noteworthy..

Is there an automatic doom that's waiting for you?
Can there already be a bullet with your name emblazoned boldly?
As you lead your life with anxious and repetitive behavior
Automatic doom

Is there a magic floating chalice waiting for you?
And would you be depressed if you determined that your quest is over
And you lead your life with anxious and repetitive behavior
Automatic doom

Is there a crystal cosmic sparrow floating away?
Is there a neo-pterodactyl coming to prey?
Are you prepared to see the bad things that you say emblazoned boldly
In gold letters on your tomb?
Posted by Ian Keenan at 4:41 PM No comments:

Lorca's birthday was last week, and..

..I had found a live clip of Morente’s 'Campanas por el poeta' with the Bulgarian Voices, then it was taken down, since then someone uploaded it anew

along with 'Cantar del Alma' which occurs earlier in the Lorca album, so you may want to listen to it first if you have time for both.


I have stopped taking an iPod around as I am trying to preserve my ear drums. One area of concern was my affection for La Légende d'Eer, which I especially enjoyed in public places.

The five quotations included by Xenakis in the original program:

Each group would spend seven days in open country, and on the eighth, they had to break camp and head out for four days to finally reach a place where one discovers, stretching all across the sky and over the earth, a beam of light straight as a pillar, akin to a rainbow, but much more radiant and pure. – Plato, The Republic

note: The first quote is the source of the title Xenakis chose for the musical component of the Diatope.  It concerns a soldier named Er who returns from the dead and describes what he saw on the other side.  The vision culminates with Er’s sighting of the "Spindle of Necessity,” a great shaft encircled with eight rings representing the eight celestial spheres known to ancient astronomy.  On each ring is perched a siren singing a tone corresponding to the circumference of its orbit and together forming a cosmic harmony.  Seated on thrones amidst the sirens are the three Fates, or “daughters of necessity,” who accompany with their voices the harmony of the sirens: Lachesis, singing of the past, Clotho of the present, and Atropos of the future.

From there emerged a crying out, indistinct, one I likened to a voice of fire,  just as there emerged from the light…a holy Word blanketing all of Nature, and the purest of fire was thrust out of the humid natural world toward the sublime area above. – Hermes Trismegistus, Pymander

For indeed, what is man within nature?  A void in the face of infinity, a whole before the void, a center between nothingness and wholeness…unable to perceive the void from whence he came, nor the infinity in which he is submerged. – Blaise Pascal, Pensées

Christ went on: “I traversed the worlds, I ascended into the suns, and soared with the Milky Ways through the wastes of heaven; but there is no God. I descended to the last reaches of the shadows of Being, and I looked into the chasm and cried: ‘Father, where art thou?’ But I heard only the eternal storm ruled by none, and the shimmering rainbow of essence stood without sun to create it, trickling above the abyss. – Jean-Paul Richter, Siebenkäs

In the first stages of the explosion, the general distribution of the star’s energy closely matches the distribution known for theoretical black holes at a temperature of 12,000 degrees Kelvin.  In the case of SN 1970g the radius was measured at 3x1014 centimeters, in other words, as large as the orbit of Uranus.  Once the supernova’s radius is known, it is possible to determine its absolute luminosity.  For SN 1970g, this was calculated at 1042 ergs per second, or one trillion times that of the sun…  During the 30 days following the explosion, the radius of the surface from which the light was emitted increases at a near-constant speed of 5,000 kilometers per second.  At the end of this period, the star’s photosphere, in other words, its visible surface, reaches a radius of 2x1018 centimeters, a much larger radius than that of our solar system. – Robert P. Kirshner, Supernova
Posted by Ian Keenan at 9:09 PM No comments: