What's up for one more day, v. XIX

If one is out and about this Saturday in Manhattan one of the all-time Chelsea-in-December lineups is mostly winding up, and in this case the Clemente and Rauch shows have left me puzzled enough to make for one of my last minute notices.  The Francesco Clemente shows especially have had a personal and formative effect on me and I will post on them again some time during the run of the Rubin show (til Feb 2), but for now know that the Rubin is free Friday nights, but as there are often lectures in the Clemente Temple then, paying admission on a weekday is often quieter.  It and Clemente's Two Tents at Mary Boone 24th St, ending Saturday, are revisitations of the period of Clemente's life when he lived in Chennai in India's Tamil Nadu, holed up in the Theophilosophical Society library, creating works on handmade paper of the ashram in Pondicherry while his lifelong strategies of representation were formed amid sacred art and secular posters. The tents are based on tourist tents located on the edge of the Thar desert outside Jaisalmer in Rajastan, mostly middle class camps where local and international package tourists are treated to camel rides and garish musical numbers, a genre intended to be seen in darkness or minimal light and at varied states of wakefulness.  The two tents are the Devil's Tent, where a figure resembling the Planter's Peanut guy or the New Yorker guy with a monocle acts out colonial repression amid some Moloch-like figures, and the Angel's Tent, where Clemente's sentiments towards the earth, body, are spirit are represented, along with works on paper inspired by Mughal miniatures. 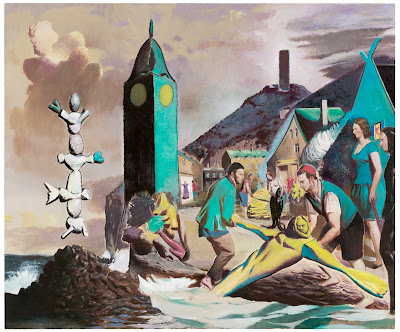 I was a bit disappointed by the last Neo Rauch show at Zwirner while finding the previous one seminal; this one I liked the first time and more the second - it is truly one for the ages which one should see if possible. 'Hüter der Nacht' is perhaps the most thematically representative in the show, in that it portrays the recurring male in the sickbed being approached by the female assuming an aquatic figure, which, in other works, appears to suggest (though nothing is ever for certain in Rauchland) Melusine and/or the mermaid found in German folk tales and literature.  Ellis Dye writes of Goethe's references to Melusine "in all these cases the destination is an exotic elsewhere, and in each case transliminal communication takes place. Woman - she who lacks boundaries - is the agent of such border crossings.. a vessel of mixing, mingling and transformation."  'Skulpteurin' comes closest to Goethe's Melusine-as-dwarf theme, with gender inversions of the Pygmalian theme; 'Marina' (above) depicts the Melusine/ Mermaid figure as a crucifix, with a mermaid in the background spatially coming from its back shoulder. In the large 'Der Blaue Fisch' (below), the female in red emerges from the guts of a large fish found by a team of men in a canal, reminding me of Breton's 'Melusina no longer under the burden of the fate unleashed on her by men alone, Melusina rescued, Melusina before the scream that will announce her return, because that scream would not have been heard if it hadn't been reversible, like the stone of the Apocalypse and like all things' in Arcanum 17. 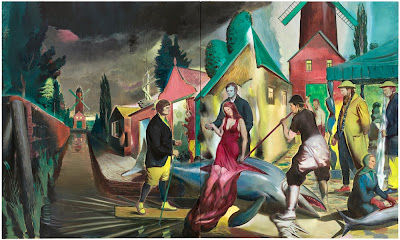 If on 24th St for Clemente at Boone this Saturday, Dionisio González' photos of architectural structures resembling the Jetsons' Googie house on stilts deteriorating in isolation in natural settings in Spain and Alabama is at Galerie Richard (514 w 24th) one more day; here the thumbnails are some consolation for not seeing the show but the color prints from the Inter-Acciones series are large scale.  Also up one more day are Nathan Lyons photos at 535 w 24th, Ahmed Alsoudani's paintings at 515 w 24th, and Sigmar Polke's manipulations of photocopies at Fergus McCaffrey, 514 w 26th St.

Ending later in Chelsea are Louise Bourgeois' suspended works at 547 w 25th (til Jan 10) and the two Picasso shows: John Richardson's Gagosian Picasso and the Camera at 522 w 21st (til Jan 3) and Pace's answer, focusing on the period with his last wife Jacqueline, including a room of variations on "Les Femmes d’Alger d’après Delacroix” that Picasso enthusiasts should try to get to (til Jan 10).
Posted by Ian Keenan at 6:01 PM No comments: