t
man
Posted by Ian Keenan at 7:28 PM No comments:

for secret
ary of t

Sentence
S at the n

serve
tory
Posted by Ian Keenan at 2:17 PM No comments:

or
s stay
Posted by Ian Keenan at 2:20 PM No comments:

Kasmin's wonderful evocation (515 27) of Brancusi's impasse Ronsin "a dead end street of ramshackle studios and workshops that had been built originally for the foreign artisans who came to work on the 1889 International Exposition.. When (collector John) Quinn made his second and last trip to Paris in the fall of 1923 - he died the following year - his happiest evenings were spent at impasse Ronsin. Henri-Pierre Roché describes an evening there in 1922 when Erik Satie was present: 'Dinner at Brancusi's - splendid. His famous cold beans puree, with garlic vinaigrette, his grilled steak... he multiplies himself, cooks, serves... there were two violins, Satie and Brancusi playing duos, teasing each other, we laugh so hard our jaws ache." (Tomkins' Duchamp) When Quinn died, Brancusi asked Duchamp and Roché (author of two of my favorite Truffaut films) to buy his works for what was then a low sum with a collector friend of Brancusi's and split them three ways. Duchamp told Pierre Cabanne he then proceeded to support himself "for fifteen or twenty years" by selling his cut of the sculptures to Roché one by one as the prices kept going up.

There's a wonderful previously unseen Ernst at the show, but I believe it was painted in Arizona and Brancusi hated Ernst for some inexplicable reason. This was, though, the general period when Ernst was preparing his move back to Paris and Man Ray was a common friend.

The show includes Duchamp's Rotoreliefs which Breton originally convinced a collector to finance and that he later made in larger number.. spiral, moving discs that recall British Vorticism. His use of movement put him at odds with Cubists "they had an absolutely clear, dogmatic line.." which led to the request to withdraw from a group show Nude Descending a Staircase, which resembled Futurism rather than Cubist scenes of someone playing a guitar or reading a newspaper with a glass of Pernod. "Always there has been a necessity for circles in my life, for.. rotation. It is a kind of narcissism.." The chocolate grinder, like the spirals anti-painterly, creates the essence of the bachelor of the Large Glass to be entered into existence by the malic molds.

Also ending this week is the aforementioned Guston - Nixon show and Hurvin Anderson at Werner 4 e 77.
Posted by Ian Keenan at 5:14 PM No comments:

What's up for three more hours: three big museum shows you already knew about if you're nearby 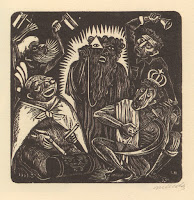 I hadn’t seen Philly’s Mexican Modernism show til last Sunday.. It has five Kahlos, all of which I’ve never seen in person, including ‘My Dress Hangs There" (below) owned by a gallery in SF.  The show’s title “Paint the Revolution,” unfortunately borrows from Mexico’s plutocratic deception using the word “revolutionary” for “the perfect dictatorship,” whose current "institutional revolutionary" presidente is today the subject of national protests four and a half years after Obama congratulated him for his victory while the opposition and much of the public still disputed the outcome.  The American Revolution, highlighted elsewhere in town, preceded such corrupt partisanship to the point that political parties were not mentioned in the constitution.  The show's only internal critique of this (a critique which became pronounced throughout Latin America) is Leopoldo Méndez’ cartoon satirizing Rivera, Siquieros, and Dr. Atl being close to the government (right), part of a number of print sets given to the museum by various donors, to go with Paul Strand photos which were recently given.  The selection was bland but with some highlights, including denizens Gerzso and Paalen but not Carrington and Varo. 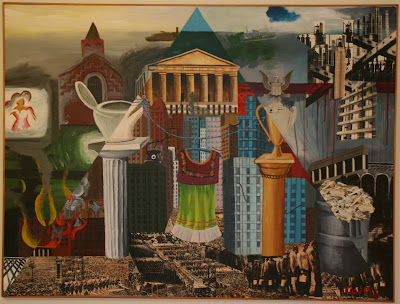 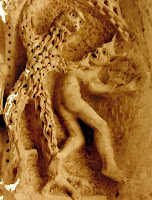 Also ending today is the Jerusalem show at the Met which I saw for the first time on Thursday.. fortuitously not giving me time to ponder its political subtext.  Would have liked to have seen that several times.. there are 12C capitals from Nazereth that look like those of the time from the South of France, only with Grover from Sesame Street (right) flanking one of several demons.  Time machines...

I assume you knew about these shows. I mentioned the various Ragnar Kjartansson shows, including the one at the Hirshhorn ending today.  I am grateful to Kjartansson for getting me in to Halldor Laxness, whom I’ve never read - prompted to dive in to World Light in Pavlovian fashion like I'm taking the course.  I also attempted, at both the Bushwick and National Mall locations, to see as much of the World Light film he made as possible.  Doing so I understand the impulse - there are various Brechtian influences - to include the bloopers in the four screen presentation, but I found that at times draining to someone who was trying to follow the story.  On the whole, the film did what it set out to do - suggest the novel and its immensity without producing its own self-contained, altered adaptation as filmmakers often do.

World Light’s most delightfully befuddling aspect is how the protagonist relates to the narrator and Laxness. The protagonist, Olafour Karason, is supposed to be based on “the life of one Magnus Hjaltason Magnusson, an Icelandic folk poet (1873-1916), including Magnusson’s abandonment by his mother, his long childhood illness as well as the extreme deprivations he endured, his tormented marriage to a grasping, manipulative epileptic woman, and his prison sentence for the sexual violation of a fourteen-year-old girl” (Sven Birkerts’ intro).  Karason’s quest is to mirror the beauty of nature, and in the course of doing so is immersed in the oligarchy of an island’s Regeneration Company, which comes to co-opt the town’s Psychic Research Society but not the labor organizers with whom Karason is friendly but philosophically at odds with, as he announces to them (in one scene in the film, at a workers meeting) “a poet.. loves the world more than all the others do.. it is much more difficult to be a poet.. than it is to be a man and live out in the world.”  The novel was first copyrighted in 1937 after he had confronted workers' movements in the US.. Laxness was at this time influenced by Taoism. 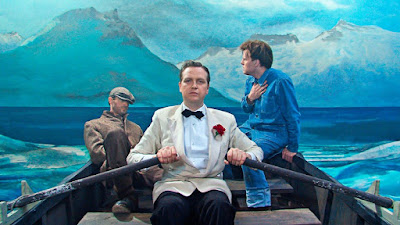 “I read it for the first time when I was writing the script,” he told Calvin Tompkins; his father, much taken by it, had staged it also. Kjartansson gets an earnest looking chap (in the blue garb above) to play Karason and casts himself as a chorus wearing his white evening jacket.  His turn as chorus stabilizes the narrator more than the novel does, and it’s clear that Kjartansson relates to Karason, which Laxness intends to some unfixed degree.  It seems that part of Laxness’ game is to isolate the pure artistic impulse in Romanticism and set it into the world below, which Magnusson’s subject matter, life story, and absence of irony befit.  There is certainly no novel quite like it, addressing the scope of 20th Century concerns (amplified in the 30s) with both directness and mystification.
Posted by Ian Keenan at 2:12 PM No comments: