The first posthumous retrospective of Mike Kelley has another two days at MoMA PS1 in Queens before opening in his home turf on March 31, having begun in Amsterdam's Stedelijk Museum where it was organized.. there was no doubt talk of subjecting the herd at MoMA Midtown to this expansive display of what Kelly termed his "Dysfunctional Bauhaus for the new religion of victimization" but aside from space considerations, mounting Kelley at a former school was irresistible as noted by curators and reviewers alike as he draws from the rituals, posters, vandalisms, and culture of schools as in his 1995 architectural work "Educational Complex" "his model of all the schools he attended omitted the rooms he forgot, which he attributes to repressed memory of trauma.."* in which, as with pop culture, he didn't believe in or attempt a psychic separation but one of critique that, by his account, led to works that were interpreted as the very nostalgia he despised for pop culture and school, developing at a moment between the Pop High Renaissance ("I'm from another generation. I have a more critical relationship to mass culture") and the arrival of the money and art stardom: "The art world is very different from what it was when I was young. When I was young, the art world was where you went to be a failure." In 1968 at age twelve in Detroit, his father a janitor his mother a cook, his aesthetic seemingly worked out, he placed a mock entry in a patriotic poster contest of ironic 'bad art' and won the contest. He got a dose of "Greenbergian formalism" at Michigan Ann Arbor where he roomed with Jim Shaw until he and Shaw went West, where Kelley soaked up and chafed against John Baldessari's "reductionist" Conceptualism at Cal Arts** in the mid-to-late 70s that has become fashionable in academic poetry over 30 years later. Kelley was emphatic that the artist does not arrive at meaning unwittingly "I don't believe in hiding intentionality," welcoming viewers though "to look at something and like it for the wrong reasons" as he says he does, not seeking what he termed Duchamp's non-retinal "reliance on hidden material that the viewer does not have access to for his meaning." Duchamp, of course, didn't hide The Green Box, and left it to the viewer to decode what he sought to express and represent -including the unwitting and unexplained - in so doing, evading the reduction of a Conceptualism for it's own sake as Kelley later did in his own way. "My early work - in part under the influence of the Conceptual Art generation of the 1960s and 1970s - refused to acknowledge that there was a historical 'I' in the work.. Meaning would flow in a kind of mythical third person, as if I.. were absent and the historically grounded reader were absent. Then I realized that this was a lie, a reiteration of the voice of dominant culture. So I tried to deal more with the specific aesthetics of my own lower-middle-class background." 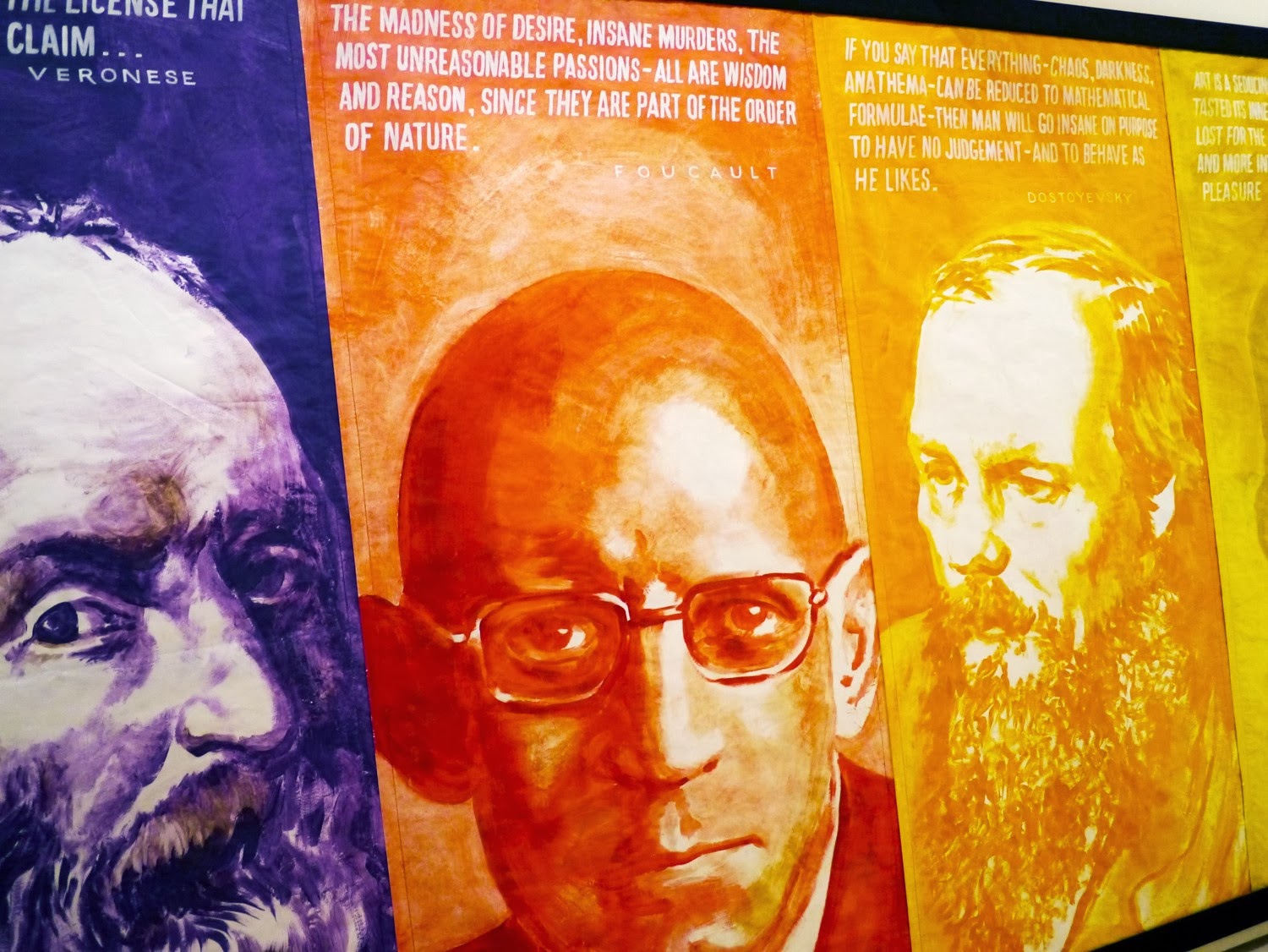 Pay For Your Pleasure (above), created for the Renaissance Society of the University of Chicago, consists of a hall of blown up, institutional posters of authors and artists implying their practice is the sublimation of the criminal mind "I do not understand laws. I have no moral sense. I am a brute" (Rimbaud) "If you encounter charlatans, reason with them.. if they resist, be bold enough to drown them" (Giotto) "I erect myself at the exact point where knowledge touches madness, and I can erect no safety rail" (Balzac) "I call 'monster' all original, inexhaustible beauty" (Jarry) leading to the 'low art' of the work of an actual local criminal which is studied to decipher their psychology. I saw this installation in his previous retrospective and the criminal's work was an uninteresting portrait - this time the criminal's was good enough, a sort of cosmological abstraction, that I thought the previous concept had been forgone and a work of Kelley's had been inserted - as he is all over the map graphically, including attempted skill levels. A hallway is typically decorated to condition the visitor to the decorum sought in the rooms and this does the opposite, as when he proposed*** to decorate an office complex by blowing up cartoons on secretary's desks to a large scale, placing "If assholes could fly, this place would be an airport" in large letters next to the conference table. The exhibition includes From Our Institution to Yours (below) in which he blew up drawings made by his art school's security guards, warning the working class against 'false images,' as the personification of animals exists in church and state as well as folk art and cartoons.

Kelley stressed in interviews that his trauma involved his encounter with the dominant culture and repeatedly denied experiencing familial abuse, a suggestion that the magazines continue to circulate to explain his suicide. He was politically passionate, describing himself as a Marxist and dialectical materialist: "Every state that's against (Bush) helps him get reelected because the population hates anything that's against the dream that he's proposing, so any time anyone says anything that counters that dream, people reject them (and) make him even stronger because people want to live in a fantasy world of American hegemonic dominance." As with Pop, his work often appears to be the full extension of Art Therapy rather than a critique of it: "Beuys had a notion of art as a curative process. I don't have that delusion. Art doesn't cure you, it makes you aware of the problems you have. Art used to be a personal sickness that showed you were better than other people. In actuality art is just saying 'let's just point this out and we can talk about it, I'm no different from you, I'm no better than you, I'm not special, I'm no genius that cut off my ear. I'm just another schmuck like you.' What I like about Beuys is that he had a very egalitarian idea of art. I don't believe that either. A lot of people don't have the talent, the strength to stand outside the culture and make a fool of themselves. He was a professional fool. What I dislike about a lot of contemporary artists is that they want to be hipsters. They're not willing to be fools, to put themselves on the line in some shared emotional way. They want to be better than other people, and that's to me worse than wanting to be the outsider and tragic and a suicide and all that crap.'"

The snowfalls have left Clyfford Still-like markings on the exterior of PS1, and Still would be an example of an artist for whom a single work has a resonance which, if somehow quantified, could score relatively favorably against the resonance of his entire oeuvre - Kelly, despite flashes of mastery of materials and inventive draftsmanship, inhabits the other side of that scale, as he was prolific and evocative with a minimum of repetition, so conducive to the Posthumous Retrospective space this is. Despite his many imitators, there will never, ever be another show like this one.

* His We Communicate Only through Our Shared Dismissal of the Pre-linguistic: Fourteen Analyses was a critique of the socialization of art
** ..after Art Institute of Chicago rejected him because he was 'too Chicago' as they were trying to copy Baldessari at Cal Arts
*** Proposal for the Decoration of an Island of Conference Rooms (with Copy Room) for an Advertising Agency Designed by Frank Gehry
Posted by Ian Keenan at 4:26 PM No comments:

A bird lived in me.
A flower traveled in my blood.
My heart was a violin.

I loved and didn't love. But sometimes
I was loved. I also
was happy: about the spring,
the hands together, what is happy.

I say man has to be!

(Herein lies a bird.
A flower.
A violin.)


"You see, that's what I said with my poem. Everybody waits for the next death of the next late great jazz musician. That's what it concludes with, sayin' everybody is waitin'. Like all the record company pirates put out legendary performances of all types of stuff that wasn't around when you were alive. It's like everybody waits 'til you're dead, then you get all the recognition. But what good is it when you're dead, if you're alive right now and you're not gettin' recognition, you know what i mean.." (Roy Campbell, Jr.)

In a book of verses spattered
with love, with sadness, with the world,
my children drew yellow ladies,
elephants trudging across red parasols,
birds imprisoned in the margin of a page,
they invaded death,
the large blue camel rests above ash-gray words,
a cheek glides across the solitude of my bones,
candor defeats the disorder of the night.

"A heart stops, another starts, it beats and bleeds within the chest, it whispers, it speaks the truth – listen! The soul, sometime staggering under life’s challenge, is straining every unseen fiber, then desires and fears are seen no longer; the soul is but a stillness somewhere in space. The heart speaks to the soul. Listen to this internal dialogue. See with the eyes of the heart; Listen when it speaks, for the heart is born pure." (Yusef Lateef)

The main thing
to be against
is Death!

Everything Else
is a
Chump!

Posted by Ian Keenan at 9:19 PM No comments: