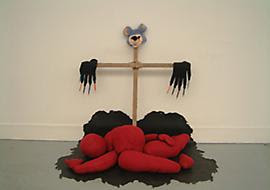 Annette Messeger (Marian Goodman, 24 w 57th, til Aug. 24) gives this account of the origins of the stuffed animal genre of sculpture: "Mike Kelley and I used the stuffed animal at the very same time... He is more interested in a direct social reflection while I will place a photo or a word on the doll, a sentimental value which will give more of a charge. I invest the doll with another content, like African voodoo effigies.." as Picasso viewed art as a weapon after studying African art. "Paul McCarthy and Mike Kelley engage in child-games, what we call in French 'pipi-caca.' In my work on the other hand, the colored crayon becomes a weapon, it is pointed. I stab with it; it keeps the formal aspect of the pretty colored pencil but is lethal, deadly." At her one woman show at the Musée d'Art Moderne de la Ville de Paris I saw a laughing three year old girl race to a pile of her stuffed animals and jump into them, causing her parents some consternation while the guard shared the laugh.

In her interviews she draws a distinction between the American and French traditions, "when an artist sees an object, he sees an object that is loaded symbolically but he also sees it visually" and says she employs "a mixture of this strong sentimental side and the visual side. In my work there are always these two elements, and I wonder if this is not opposed to minimalist American Art.. In Europe we have the weight of the past on us, which makes us much less direct than Americans who seem to always produce a kind of 'new art' without history." This opposition is historically denied, most famously in Adolph Gottlieb and Mark Rothko's 1943 New York Times letter "There is no such thing as good painting about nothing. We assert that the subject is crucial and only that subject-matter is valid which is tragic and timeless," but the subjects in late Rothkos and Gottliebs are to be sought, not "loaded" and apparent, perhaps less important to their imitators.

As in Europe, she finds in Mexican streets (which she visits often) "objects that are loaded symbolically" : "Visually it's just overwhelming; sometimes it's just too much, and you have to stop. The colors, the smells, the markets, everything. The religious iconography. There's this street in Mexico City, near the cathedral, and it's just filled with nothing but plaster religious icons!" the "forest of (Mexican) symbols" found in Alberto Gironella's assemblages (below). Her statement "I do see my work yes, as bric-a-brac, a surrealist hodgepodge.." suggests the visits to the flea market with Marcel Noll related by Andre Breton in Nadja and Gironella's methods. 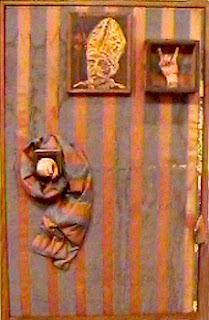 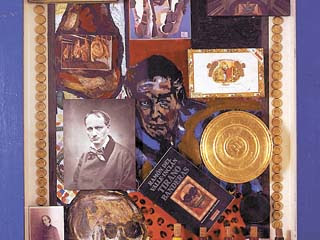 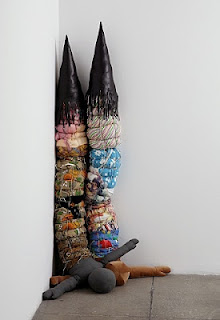 Breton in that book says "de Chirico could only paint when surprised (surprised first of all) by certain arrangements of objects" and Catherine Grenier writes of this show "The choice for these architectural forms either conical (left) or abstract in their shape makes one think of the metaphysical world of de Chirico (below, left) or the allegorical archaism of Carra.. (below, right)" referring to the period when the two were painting Metaphysical Interiors together in Ferrara. de Chirico had at times similar views of visual experience: "One must picture everything in the world as an enigma, not only the great questions one has always asked himself - why was the world created, why are we born, live and die.. But rather to understand the enigma of things generally considered insignificant.. To live in the world as if in an immense museum of strangeness, full of curious many-colored toys which change their appearance, which, like little children we sometimes break to see how they are made on the inside, and, disappointed, realize they are empty." 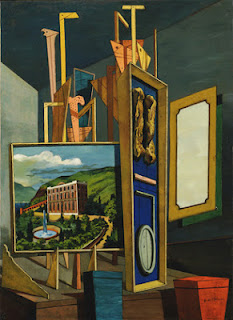 Baudelaire in 1853:  "The overriding desire of most children is to get at and see the soul of their toys, some at the end of a certain period of use, others straightaway.. The child, like the people besieging the Tuileries, makes a supreme effort, at last he opens it up, he is stronger. But where is the soul? This is the beginning of melancholy and gloom. There are others who immediately break the toy which has hardly been put in their hands, hardly examined;.. I do not understand the mysterious motive that causes their action."

de Chirico would disagree with Messager's view of the artists' "character." Messager: "Art is a secret shared between the individual and the collective. In order to be touched by a work of art, it must first refer to the person who made it, a strong personality, and it must touch the collective, everyone must find something in this order. Artaud is a good model for this. He made his drawings for himself only and we can all find ourselves in these portraits, his auto-portraits or his manifestos. It is precisely this back and forth between the individual, between the inside and the outside, the private and the public, which makes a work of art stand out, because it touches both worlds at the same time."

de Chirico: "Nietzsche very properly remarks: 'With the greatest respect one says of a man 'He is a character.' Yes - if he exhibits a course logic, a logic obvious to the eyes of the least discerning. But as soon as it is a question of a more subtle and profound spirit, which is coherent in its own way, the observer denies the existence of a character.' The same observation can be made on art, and also on painting. A profound picture will be entirely without the gesticulations, the idealism which attracts the attention of the crowd and makes the name of an artists well-known. All momentary posture, all forced movement will be put aside."  (1911-15) Artaud invests his observations in his persona, but manages to evade the defects of the practice set forth by Nietzsche and de Chirico.

de Chirico became more attentive to form than content after his first solo show in Rome in 1919 came under critical attack and he became enamored of the Titians and Reubenses at the Villa Borghese. He soon thereafter designed stage sets with Diaghilev and others, an association which brought forth Picasso's Neo-Classical period (at his first wife's insistence), and so the Neo-Classical Cocteau came to de Chirico's defense when he began to fall out with the Surrealists. It could be that he reached a threshold in discerning content that he wanted the Rome critics and ballet culture to pull him away from.  Neo Rauch appears to be undergoing a simlar process in the past few years, with less extensive development of enigmatic dramatic tableau and more references to art-historical approaches to form (below). 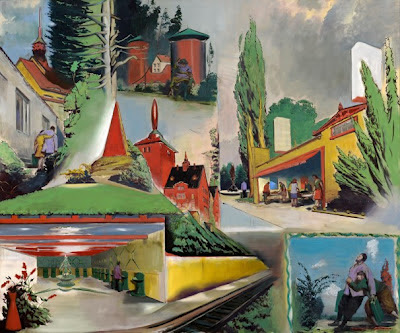