What's up for a few more hours v. XIV

Two weeks ago I thought I had fixed my computer and reflected on the quaint, pastoral joys of having been offline, until I realized after a day that I hadn't fixed my computer, but the second phase has been even more full of usefulness and reverie, especially as I don't follow the minutiae of Killary Versus Don (Deport) Juan (as much).  It would however be uncharacteristic of Piri' Miri Muli' not to note the many shows ending this week or thereafter, here at the community library, 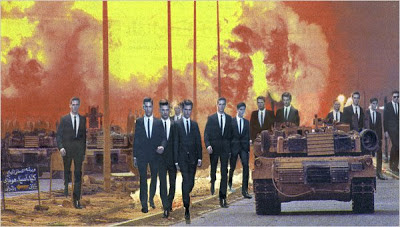 especially uncharacteristic not to note a room full of George Groszes ending today (David Nolan 527 29) including works from Gott Mit Uns and replete with a selection of more recent artists in a similar vein, like Martha Rosler's photocollage (above) of male models descending on an Iraqi village, a corrugated steel construction by Ian Hamilton Finlay ("The revolution is frozen, all principles are weakened.."), an Immendorff from the Café Deutschland series, two Nancy Speros from the 60s, Rivera, Rauchenberg, Abramovic, and two works by Sandra Vasquez de la Horra who shows there.

Two blocks south, it's the last day to see a retrospective of Carol Rama "censored as obscene by the Italian government in 1945" at 514 26.  Also on 26th, Walther's new group show of African photos includes three videos by Simon Gush on John Calvin and "by extension, the concept of 'work ethic' that spread from Protestant Europe to South Africa and became part of apartheid ideology" (526 26 suite 718).  On 25th, Lynda Benglis' paper and aluminum works are ending today (547 25).  Across from the Big Black Baselitzes up for another week (522 21) you can get free Turkish style yogurt after looking at carpets inspired by Mayakovsky drawings.


Between those at 547 27 til Oct 26 Alex Webb's color photos from Mexico culled from thirty years there take the ironic juxtaposition route, including one from 1979 Boquillas del Carmen with a boy jumping high enough against a rural, sun soaked building he looks like he's flying, with two silhouettes of birds nearby, a cross, the name of the building 'Juarez School,' a gate framing the picture, and the shadow of a tree.  That's just one of three (and counting) shows of Mexican photos in town - Throckmorton (145 57 3rd floor) has 60 works by Hector Garcia, including a portrait of Orozco with only his hand in focus, and last but not least a retrospective of Kati Horna at the Americas Society (680 Park), which despite the curators making tactical critiques and historically inaccurate statements about the CNT in Barcelona during the civil war to please the hosting organization, a caption to Leonora Carrington's wedding photo that does not identify Benjamin Peret standing squarely in the middle, is nonetheless with copies of the Catalan publications, documentation of a stage set by Alberto Gironella, and an essay of Carrington posing as a necrophiliac, not a gift horse to look in the mouth. 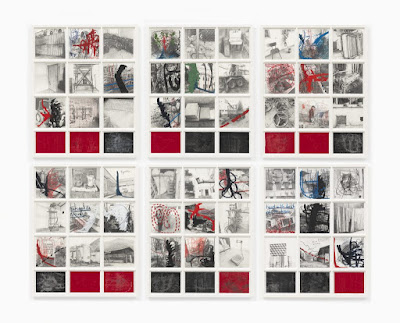 The recent black in abstraction show got me into Oscar Murillo's recent graphite works on paper and there's a wonderful example (above) in his show ending today (525-533 19th), plus a sculptural installation, a family scrapbook with drawings you can page through, and a room of his large scale oil on linen and canvas works taking up themes of globalization. Your humble correspondent stumbled into Oscar the day after the opening 'A few years ago when you were getting people angry, I liked it. We exist.'


If you're downtown you have through Sunday to see Alex Prager's La Grande Sortie about a dancer trying to please herself. At some point in the next two weeks a visit to Victor Burgin's UK76, (below) forty years after its creation but no less relevant, is highly recommended (99 Bowery 2nd floor).  Slought in Philly has a Burgin show ending the same time (4017 Walnut). 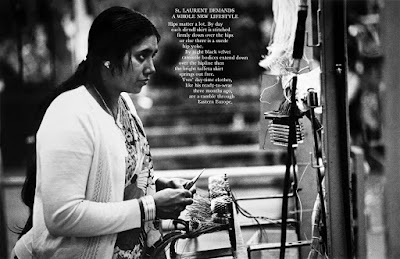 Julie Mehretu's two story show at 24 57th 4th floor is up til the 29th. The gallery notes "evidence of an evolved vocabulary of abstraction.. a gestural force unseen in her work before."  It seems a mishmash of Matta's layering, figurative elements that look like Guston, and Twombly - that is, she has for the moment traded her signature style for large, expensive apprentice works, which I find admirable in a way. The Damascus-themed photogravure and etching in the third floor project room is more in keeping with the old Julie and the strongest work in the show, as she has otherwise decided to get worse to get better which may lead to an unforeseen payoff.  Also down the hall on the 3rd floor is a Man Ray retrospective.  Gagosian uptown has in the book store Sally Mann photos of Twombly's studio in its last years, but if you stare straight ahead there's a Mark Strand poem.  Also near there it's the last day to screen Joseph Cornell's Rose Hobart without the soundtrack at Buchholz' Douglas Crimp tribute. (17 82nd).
Posted by Ian Keenan at 12:57 PM No comments: