Since Alain Resnais died I have been re-watching the films and will post about them some time. Harvard Film Archives - which Charles Olson once introduced for - is projecting them these days in a Le Corbusier-designed theater.. if you're nearby tonight at 7pm is the masterpiece La guerre est finie, next Saturday the 28th at 7 is Muriel, or the Time of Return (my favorite of his, which I will attempt to catch), and Monday the 30th at 7 Providence. The ones I named are the ones I recommend, which doesn't include Last Year in Marienbad, which I consider a valiant attempt to make Robbe-Grillet cinematic as I may elaborate on in said post. I don't know what was available to the nice folks at the archive but the films I consider better than Marienbad (and the others they feature like Wild Grass) of those within reach here, in order of preference: 1. Muriel, 2. Hiroshima, Mon Amour, 3. Le Guerre Est Finie, 4. Providence, 5. La vie est un roman, 6. Night and Fog (short; his short films on Van Gogh, Picasso and Gauguin would also roughly place here), 7. Mélo, 8. Love Unto Death, 9. You Ain't Seen Nothing Yet. 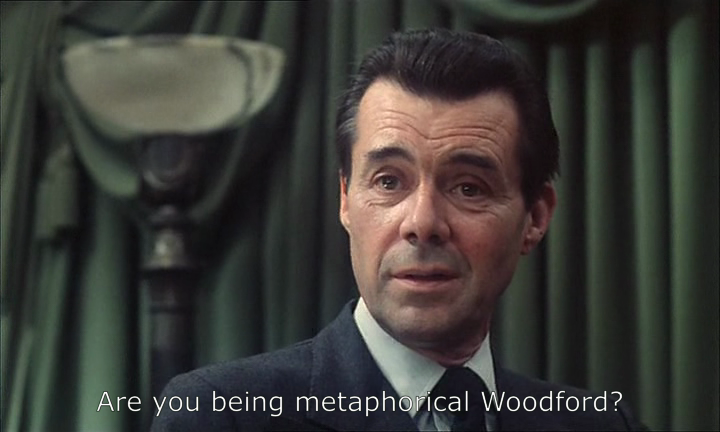 Posted by Ian Keenan at 4:31 AM No comments: 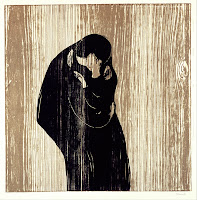 A bunch of shows now will likely elicit comment here in the next couple of days but if you can get to Princeton today before 5pm it's the last day to see MoMA's collection of Edvard Munch works on paper (which MoMA hung up, I think fewer in all, when The Scream - that work the artist asked the Genie to banalize and the Genie granteth - was loaned to them) which constitute some of the best prints ever made by a human, I think the best but you can check the samplings from Picasso's Vollard Suite in Philly if they're not getting it done for you. In Vollard and the Frieze of Life, there is a relation between universal archetypes and contingent experience which haggles over the formal qualities, color, line, symbolism, the concept, meta- and phenomenology, but this haggling comes from the unification of the two, like the woodcut of The Kiss (left) that has been reworked from drawings from fresh emotional content. The print version of Moonlight (below) is perhaps for me the most powerful of the show. If the face is that of mistress Milly Thaulow leaving her house at night in 1885, and the house in this print is believed to resemble the shore house his father rented, they share the common color brown, while the window pane and the tree share green, both featuring a combinations of right angles and natural curves as moonlight on the face is itself a reflection with its symbolic history, as with the shadow. The large format painting on the subject highlights the bright glow of the face suggesting the influence of Redon's Marsh Flower (Hommage à Goya), Germination 2 and Triste Montée of Dans le Rêve, and Obsession, of which the latter may have provided the compositional structure for works like Jealousy. 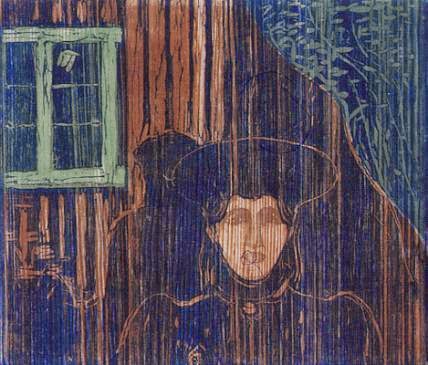 The curators' promo "from his first prints in 1894 to those completed in 1902, the year of the triumphant exhibition of the complete Frieze of Light painting cycle at the Berlin Secession" omits from the history of institutional reception the fact that in 1892 the Berlin Artists Association took his works down from their show after one week, leading the the formation of the Secession (and publicity and attention for Munch) which itself wouldn't show Munch's works until after the intention of certain personalities was overcome. Whether they are dealing in paternalistic euphemisms about official taste hasn't broken my relative détente with the Princeton curators as they feature a huge Riopelle in their new abstraction show.
Posted by Ian Keenan at 11:02 AM No comments: