What's up for two more days, I mean no yes two days and an hour or so, v. XI and/or XII


This year's presentation of late 70s- early80s Café Deutschland paintings by Jörg Immendorff, long represented by Michael Werner (4 East 77th, through 1 November), closes less than a week before David Zwirner's new opening of Neo Rauch, who has stated his admiration for Immendorff's series which made waves in Germany when Rauch was in art school.  I don't know if those selecting the works intended this, but compositional strategies and characters in the canvases in the show reminded me of some in Rauch's, while flags emptied of meaning found in Rauch, who grew up in the GDR, were an early theme of Immendorff the West German. 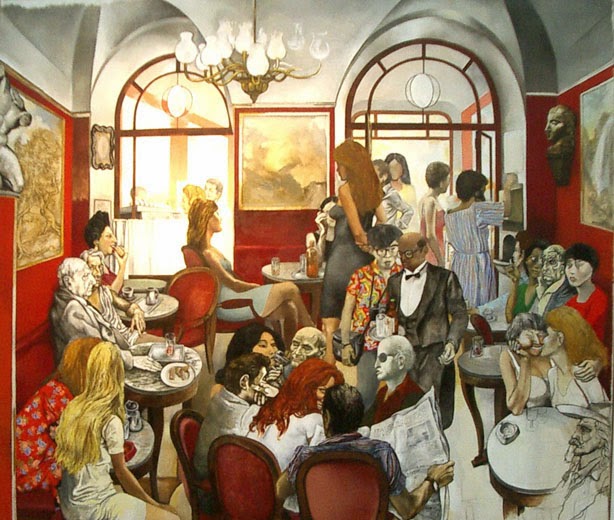 Immendorf has said that the Café Deutschland series was born when he saw Renato Guttuso's Caffè Greco in reproduction (above) and then in person in Cologne.  Guttuso's early works were realist protests during the Fascist era of Italy, after which he placed mythological themes in contemporary settings, a technique de Chirico used to channel Böcklin.  Caffè Greco was painted in 1976, when de Chirico was living next door to the 18th Century café which has welcomed Goethe, Byron, and Stendhal, so Guttuso would see him, and, on one occasion, Buffalo Bill there, as well as I suppose Gide, seen in the central foreground, while Duchamp's arm holding a cigar may be a reference to what the owner of the arm called "the fourth dimension," and Picasso's neo-Classical Dora Maar across the room from the Torso of Belvedere would similarly relate to Guttuso's stylistic affinities.  The figure wearing sunglasses to the right of Gide is from de Chirico's portrait of Apollinaire (below), said to suggest the blindness of the seer.  Regardless of how one views de Chirico's late work, incorporating theatricality and open-ended time-images quoting the classical era, Guttuso's dual portrait reflects the inclination of many to separate the phases of de Chirico's work, of his youth "the nostalgia of the infinite" as he prophesized in one of his titles which is represented here visually. 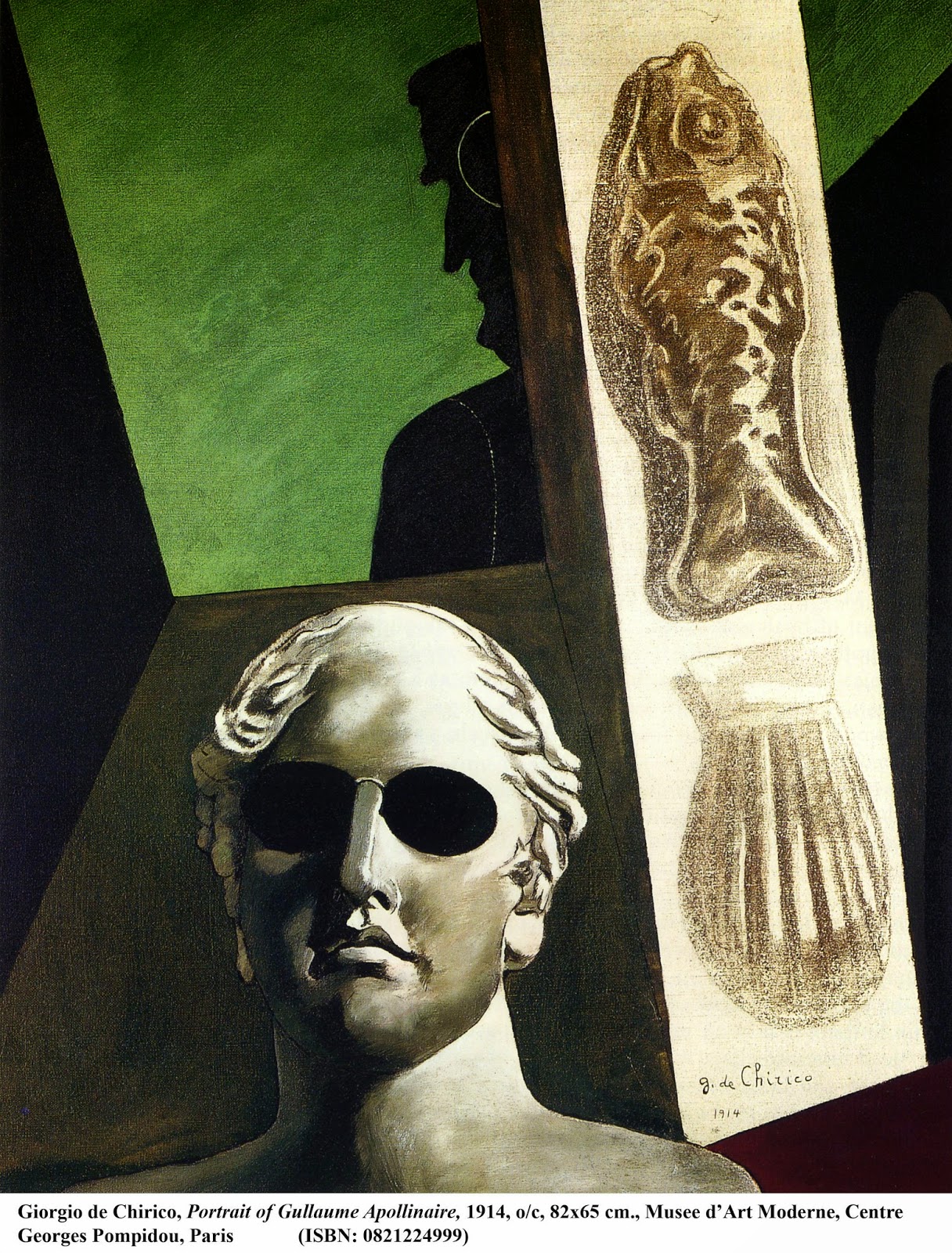 Guttuso's portrait of de Chirico in a known place is not in accord with de Chirico's representation of the Stimmung of imagined places drawn from his readings of Nietzsche, Otto Weininger, and the Schopenhauer who wrote "this pure and objective Stimmung of the soul is encouraged and determined by encounters with external objects" and, though a respite from the political content of Guttuso's early work, paved the way for Immendorff to set an eternal present of political imagery in such a place.  As Husserl, whom I'm not aware of de Chirico reading, described the primary emotional experience of objects and of time, de Chirico's canvases would seem to be set more in emotional recesses than his successors though he included clocks in his locales, perhaps referencing the Stimmung of afternoons, in canvases like The Melancholy of Departure, The Philosopher's Conquest (below) and The Soothsayer's Recompense.  Rauch's work thereafter would vary the locales in accord with emotional imperatives as well as adding personae from sociological observation.  Political content is more universally recognizable than emotional content, as humans can be estranged from even their own emotional memories, as I've indicated may be increasingly the case with Rauch as it was with de Chirico. 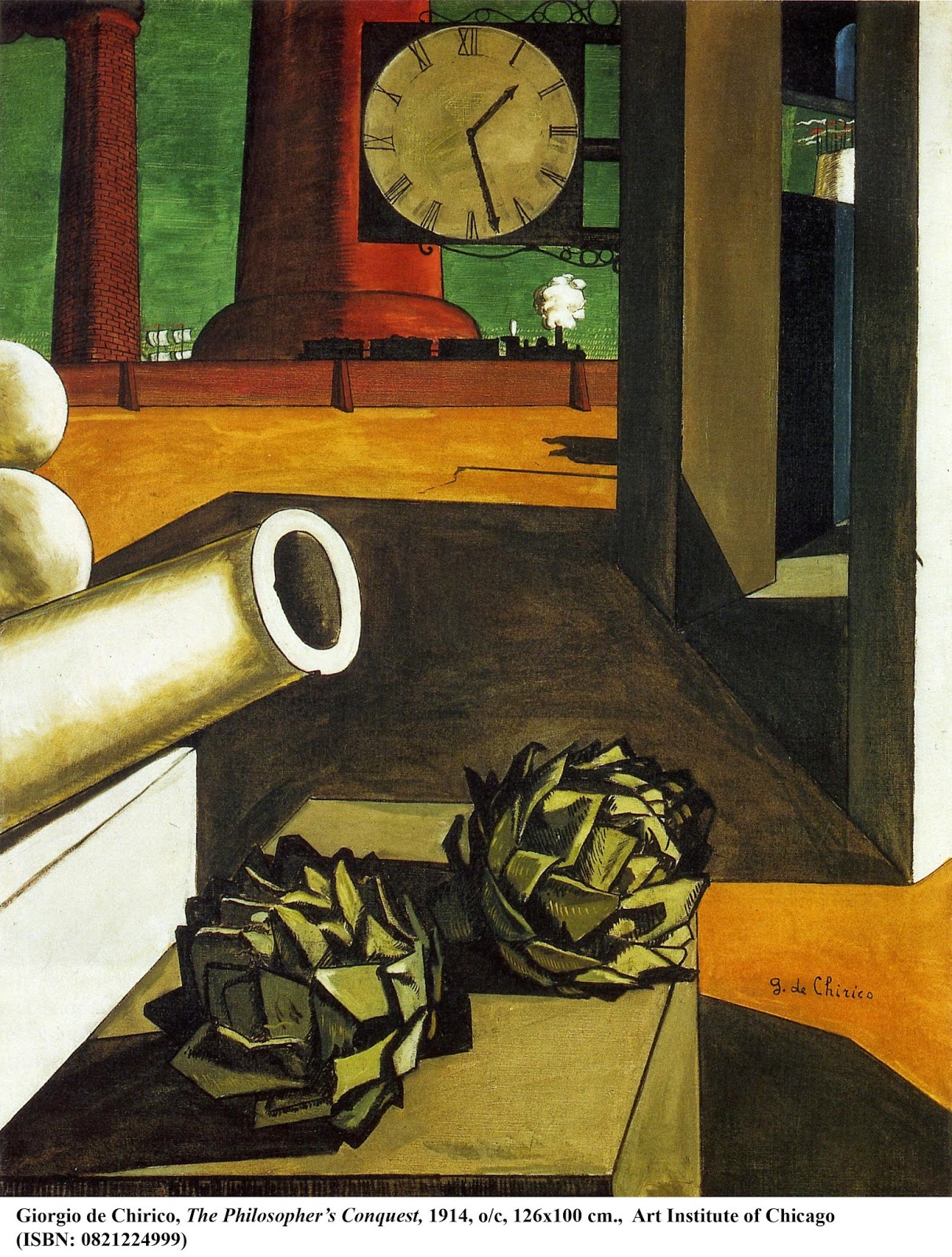 Posted by Ian Keenan at 3:41 PM No comments:

I want to start a new poem
which I will recite on the day of judgement
to him who created me and formed me from nothingness.
If he wants to ask me to give account of anything
and if he wants to put me among the devils
I will say to him: 'Lord have mercy, don't do such a thing!
For in this evil world I spent my life tormenting myself.
If it please you, then, keep me from tormentors..'