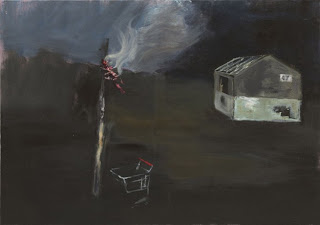 One show I like that’s still up is Aaron van Erp, a Dutchman known to employ figures in his canvases but who's taken to show figures physically broken up. The postcard, which I have kept at my day job desk for two days for extended subtext contemplation, has such a figure (a dog, actually) burning at the top of a pole with a shopping cart at the bottom and a small house in the background which a large number on it. You can see all five paintings on the gallery website but his painterly effects reward a visit.

Piotr Ulanski is giving New York what it wants: references to American traditions and sots-art. Sots-art was interesting before Gorbachev took office, or, more precisely, before Komar and Melamid became the first Russians to get an NEA grant in the late 80s. Ulanski’s irony is simple, garish, opportunistic, and monumental, and thus an enjoyable and forgettable outing.
Posted by Ian Keenan at 10:08 PM No comments:

During my break from this blog the world lost one of its great poets, Aimé Césaire. I surmise that the incantation style of "Footnote to Howl" (repetition of "I'm with you in Rockland..") comes from Césaire's "Notebook of a Return to a Native Land" (repetition of "Au bout du petit matin.."). Although I'm not aware of a direct reference to Ginsberg reading Césaire then, it is likely that the translation of Notebook was purchased and absorbed by Carl Solomon between its release in the US in 1947 and his meetings with Ginsberg in 1950, because one can't imagine Solomon seeing and not buying it given his tastes, and it was as obtainable in New York as the French language works that Solomon is documented to have shared with Ginsberg. Breton called Notebook “nothing less than the great lyrical monument of our times.”

The conditions of Césaire’s upbringing have been a matter of continuous debate, but his father was clearly of an upwardly mobile mindset which led to Aime being assiduously taught French rather than Creole. I have noted on this blog in the past the relation between the two languages in the Caribbean - the phrase “He spoke French” being synonymous in Creole to “he is trying to deceive you,” and these suspicions being vindicated repeatedly by the histories of Martinique and the other Creole nations. Yet for Césaire, French led him directly to the caste of Rimbaud and Lautreamont and to a fateful meeting with André Breton in 1941, after Breton had discovered his work in Tropiques. Césaire called the meeting “a great shortcut towards finding myself.” Césaire forcefully and famously but without analysis addressed the tension of using the colonial language by mythologizing his lineage: “Because we hate you, you and your reason, we call upon the early dementia, the flaming madness of the early dementia, the flaming madness of an tenacious cannibalism...Take me as I am, I don’t adapt to you!”

As his election to public office coincided with the post-Vichy reclassification of Martinique as a department, Césaire’s belief in the “transitional” nature of culture and politics was both in the active, Surrealist spirit of transmutation and the more passive deference to nature, especially later in his years as a poet and politician. 1960's Ferraments is both a political and historical text and a demarcation of limits of the present within infinity, as in the “when/ when is tomorrow my people” of Out of Alien Days and “a child will half-open the door..” (In Truth). Amongst the Surrealists, his poetry utilized the rhetorical and polemic perhaps most frequently as these impulses intermixed with the connotive alchemy throughout his life. I see him as a poet of infinite transitions: through a magic he lets us partake of Truth and Justice, translating truth from the Creole and justice, as he reiterates repeatedly, from nature itself.
Posted by Ian Keenan at 5:55 PM 4 comments: