with an empty room in the back. I hadn’t at the time seen  Beckmann’s  empty room, his last painting. (Met til this evening)


Also the most recent and second time I had visited the St Louis Museum of Art I had not slept the night before, but figured that seeing their vast Beckmann collection red-eyed would be part of the fun.  Little did I know that they had a well-attended show of floral arrangements in front of, and matching the colors of, the paintings, which attracted crowds that would openly state their preference for the flowers over the Ernsts and Beckmanns. I was counting to ten, and if that didn’t work I would count to twenty, and as it turns out I managed to not make a major scene.  Especially large was the crowd around the floral arrangement in front of Columbine:

Don't miss at the 75th and Madison outpost the Marisa Merz retrospective through May 7, and gallery 464 at 5th Avenue has Krishna Reddy's mixed color intaglio from 1968 "Demonstrators." The highlight of MoMA's floor of 1960s art, up til March 12 and of which I may type more about, is Henri Cartier-Bresson's photographs of May '68, which I don't recall being up when the floor was initially hung. 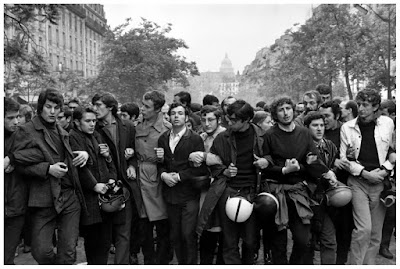 Also there I cannot get enough of the Picabia retrospective: a masterfully curated show of one of the most influential and original painters of all time. Breton said he was the first painter he knew of to use abstraction. Michael Kimmelman wrote about the 'transparencies,’ images juxtaposed by layering, in 1989 “one need only visit the display of works by Sigmar Polke now at the Mary Boone Gallery to realize Picabia's influence.”  Pierre Cabanne said to Duchamp “the Picabia-Duchamp meeting largely determined the break you were in the process of making” to which Duchamp said “yes,” referring to the break from Cubism to non-retinal painting and readymades. Duchamp started painting machines first but related the practice immediately to Picabia who took it in different directions.  Picabia has had a deeply personal and emotional impact on me for a while and I am sorting through more typing about him for this space that I will return to in a week or so.

Bo's'n Pettibon's retrospective is up at the New Museum til April 9 and his tenth show at Zwirner opens this week (Update 3/2: 'Raymond Pettibon's exhibition TH 'EXPLOSIYV SHOYRT T  will now open at a later date') along with a new Alice Neel show. Near the New, David Diao waxes nostalgic about 5 1/2 years spent in Hong Kong as a child at 54 Franklin til March 11. 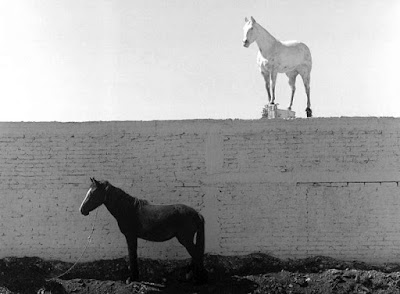 In Midtown, this is the last week for Flor Garduño's photographs at 145 e 57 3rd fl, an assistant to Manuel Alvarez Bravo (above).  DAG's selection of Bengali works is at 41 e 57 suite 708 til March 10, Pace McGill has free speech-related photos from the US. 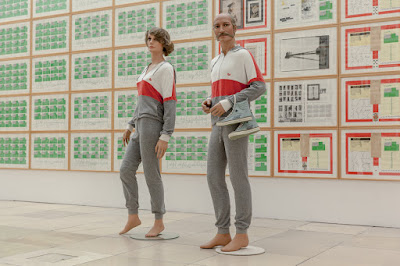 I used to get upset when the Dia Beacon would take down Hanne Darboven's Kulturgeschichte rooms coinciding with my visits, but now a much larger version (above) is at their Chelsea outpost at 535 21. Wangechi Mutu's content seems to be moving towards the decorative, i.e. collector's living rooms, at 530 21. André Butzer's last figurative show received a critical trashing and now he's found abstract expressionist religion, “The ostensible uniformity of the paintings underlines the variations between them," 519 24.  Yinka Shonibare MBE's Victorian Philanthropist's Parlour is at 533 26.
Posted by Ian Keenan at 9:18 AM No comments:

There was an article in the Guardian a while back ‘(Andrew) Motion, chairman of the judging panel for next month's David Cohen prize for literature, was trying to kickstart a debate on who was "the greatest living writer in the British Isles".

‘So far the engine has refused to spark into life. The suggestions are few, and one or two may be facetious: Amis, of course; the poet Tom Raworth; the novelist Lesley Glaister; the footballing penseur Wayne Rooney (why not Coleen?). ‘

I was the one who ‘suggested’ Raworth and join all the others in lamenting his passing.  I think a link and a second link got me to Motion’s website; otherwise I agree with Charles Bernstein this past October ‘If Andrew Motion is a poet, I don’t want to be a poet.’  So my loyalties as to who was the ‘greatest living writer of the British Isles’ had at least been noted in a formerly palatable newspaper.  If you ask me about the best reading I’ve ever attended his will come immediately to mind.. this one starts at 29:45..

Piri’ Miri Muli’ concerns: he uses the line break within the word a few times, including the first poem in his selected, to force an inversion of meaning within the sentence which came much more often in his verse, retaining a control of content used for anything but and other effects.  Also, having lived for a time in Mexico, he weighed in "Gaslight" on Enrique González Martínez’ owl in response to Rubén Darío’s swan..

poetry is neither swan nor owl
but worker, miner
digging each generation deeper
through the shit of its eaters
to the root - then up to the great tomato
Posted by Ian Keenan at 8:06 PM No comments:

Petzel’s curatorial response to the Trump inauguration that includes works from long before this year and different perspectives, including a bust of Snowden installed temporarily in a park. 456 W 18th Street

If you would prefer the human foot to be red, disembodied, glowing, in groups of four, and only visible from straight ahead then Louise B. has you covered. 547 25th

Also in DC a wonderful show of photos of a Rajisthani girl and her mother and sister including letters documenting her predicament by Gauri Gill at the Sackler through Sunday.
Posted by Ian Keenan at 4:33 PM No comments: