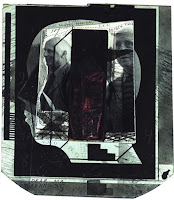 Ray Johnson at Feigen (34 East 69th) has been held over for another two weeks, including versions of his Rimbaud cover altered by 1971 readers of American Arts and his portrait of Max Ernst inside Ray's own head (right).  They also have a couple Matta works on paper out and one by Tanguy.  One thing I gathered from the documentary is we both drink the same tea.

Shows just opening I saw around there:

Concurrent with Ft. Lauderdale keeping 120 works of theirs by Asger Jorn and the Hell-Horse of the WW2 Danish underground up til February, Blum and Poe follow up last fall's Karl Appel show with a three floor overview of CoBrA with a delightful Jorn selection of their own, til Oct 17 (19 e 66th).  A room is devoted to the sculptures of Shinkichi Tajiri, subject of a new monograph, who emigrated to Amsterdam after detention in Arizona during WW2 and being wounded in Italy, as well as photographs of temporary sculptures and his short cinematic evocation of early 60s Dutch ganja.

Jonier Marín's performance works, mostly from the early 70s, include his posting the work "incomunicable" upside down on Bogota buildings, photographing it behind passers by, and turning the photo upside down, 35 e67 4th fl. til Oct 31.

When I came to the fourth floor at 24 w57h, I recalled reading that Marian Goodman's show was up but was faked out, thinking that the show was in installation.  The walls were curtained off , the floor, like Pierre Huyghe's Met roof, was unfinished, a man in traditional African dress stood in the back of the gallery. I went to Stux and getting back on the elevator, confirmed that it was Goodman's floor. I returned and the man in African dress told me I could look at this room and the other one, following me into the other one to tell me I could take photographs of Adrián Villar Rojas' Oxymandias-like replica of Michelangelo's David on the floor, with the curtains and other small items comprising a time image, at which time I told him I didn't have a camera. (til Oct 10)

Mike Kelley's (511 West 18th Street, til Oct 24) urithane resin and mixed media sculptures of the cityscapes resulting when "Superman ultimately wrestles Kandor away from Brainiac and hides it in his Fortress of Solitude, sustaining its citizens with tanks of Kryptonic atmosphere. As Kelley once explained, Kandor functions for Superman as ‘a perpetual reminder of his inability to escape the past, and his alienated relationship to his present world.’" (Update 10/5 - huge and well presented, stuff that wasn't in the retrospectives)


Dana Schutz (456 W 18th Street til Oct 24) She seems to have moved to more everyday subject matter when she moved to Petzel as opposed to the more varied, at times history themed finale at Feuer; this one adds some stylistic wrinkles. (edited 10/5 after seeing the show)