What's up for another week

At Washington Square's 80WSE, "Dream of Solentiname" (til Feb 17) was put together without the cooperation of the Nicaraguan government, which had wrested its Ministry of Culture from the administration of Solentiname Island’s priest, the poet Ernesto Cardenal, in 1988 after eleven years in favor of Rosario Murillo, El Presidente Ortega’s wife.  This past year, Ortega’s corrupt judiciary handed down an $800,000 judgement against Cardenal, now 93.  Former Frieze curator Nicola Lees, now director of the newly expanded galleries, sees the show challenging the growing materialism of the art world, as the first room harkens back to the joint statements against Reagan’s Contra War signed by luminaries of the visual arts, which unintentionally highlight how Obama and company have pacified fashionable gringo dissidents while fixing elections in Honduras, Brazil, and Haiti.  Rooms feature architectural panels from Marcos Aguelo’s reconstruction of Solentiname's church, Susan Meiselas’ photography of the revolution, and the wildlife sculptures of Cardenal, whose belief in the ecology of the revolution has been betrayed by Nicaragua’s proposed canal, but the highlight of the show is a room of  liberation theology oil panels by various artists likening the battles of the Sandinista revolution to Christ’s passion. 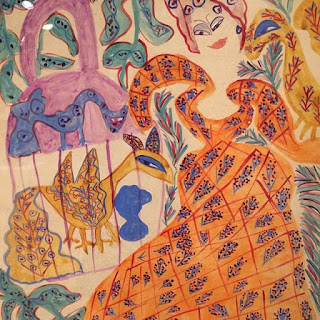 the basement of the Grey next door til March 31 is a collection of Baya gouaches from the Maight collections, the family that sponsored her when she moved from Algeria to the South of France. The Grey owns a few ceramics from Picasso’s Vallauris period, and the occasion of Baya befriending him while living there is a propitious excuse for showing them here. Despite the show's subtitle 'Woman of Algiers,' there is no known connection between Baya and Picasso's appropriations of the Delacroix painting. In the “What Andre Breton said” department (pdf): “I speak, not like so many others to deplore an end but to promote a beginning, and over this beginning Baya is queen. The beginning of an age of emancipation and concord, radically severed from what came before and one of whose principal levers is, for man, the systematic and always greater impregnation of nature. The primer of this age is in Charles Fourier, the brand new motor has just been supplied by Malcolm de Chazal. But the rocket heralding it, I propose we call it Baya.”

Miguel Abeu's two Chinatown galleries feature til March 11 "Collage(s) de France," Jean-Luc Godard's dioramas for a 2006 show at the Pompidieu that was truncated due to the auteur’s conflict with the institution. What remains is what he describes as an ‘archeology’ of the cinema, which arrives at that synthesis through the construction of dollhouses of Godard’s consciousness, rewarding repeated visits from Godard enthusiasts.  The dollhouses are at Abreu’s 88 Eldridge outpost along with projected screenings of some harder to find Godard projects, while other materials and screenings of features on a TV can be found at its Orchard St location. On the 5th floor of 88 Eldridge til March 18, David Lewis has the best Thornton Dial selection I've seen (pdf).   33 Orchard has more Indian tantra works, some signed by contemporary artists and other anonymous, from various collectors.

Leon Golub at the Met Breuer til May 27 is sanitized of any historical specificity: at one point a card describes a series of portraits of Brazilian military junta leader Ernesto Geisel “as aged and wizened."  In the second to last year of Geisel’s administration, he responded to a legislative loss by dismissing congress under the A1-5 laws and ensuring the elections would be won by the junta supported by the CIA, while continuing to open the economy to US investment, a history their description card omits while attributing Golub’s likeness of Geisel to “the social construction of authority and masculinity.”  In the Thomas Cole show, the Met curators relish Cole’s cartoon lampooning a Luddite leader and rather ridiculously speculate that the fires in The Course of Empire: Destruction may relate to Luddite fires, when there is direct source material tying the series to Byron’s anti-war poem Childe Harold’s Pilgrimage, wherein he broke with other Romantics in its denunciation of the Napoleonic Wars, a poem which had already provided the inspiration for Turner’s The Field of Waterloo.


Their are, though, a half dozen loans of major Turners from British museums here til May 13.  Joseph Cornell’s Homage to Juan Gris til April 15 is well worth seeing as it literally shows both sides of his works and some that are not shown at their host museums due to being considered unfinished or minor. The industry of presuming to read Cornell’s mind is in full throttle and there are some stated cultural associations I don’t agree with here.  Some works are from the Bergman collection at Art Institute of Chicago, to whom Cornell said ‘you have too many of my works’ at which time Bergman turned to third party sources.  The second best Cornell collection is in New Orleans due to a gift by the Cornell foundation.  Michelangelo (through Sunday Feb 12) has quite a lot of drawings, including many from the Ashmolean in Oxford, many that are once-in-a-lifetime views, though it helps to share his taste for the male anatomy. About the Met price hike, institutional elitism prevents museums from developing a process for deaccessioning works that seeks the input of scholars and the community.  The public would get a list of works that have no chance of ever being exhibited and can have their complaints about specific works mediated by a museum employee and an external advisor.  In the case of the Met, $20 million of their two billion dollar endowment could give them four years to devise such a system. Common sense.  Met President Weiss hails from American university administration, often a contest determining who can position themselves to dictate terms to others and is willing to raise the prices.  Then you have museums like Fisk and La Salle announcing without public input they are going to sell the crown jewels pending litigation. Obviously if a museum president deceptively cites statistics to the public about their voluntary contributions he should be immediately removed from his office and return to being a mediocre Medieval art professor. PAFA made Sundays free during its Norman Lewis retrospective and the place was full of black Philadelphians. The Met has sent the opposite signal to low income North Jersey residents and their more contemporary exhibitions suffer from this privileged insularity ‘in this room, Hockney presents us with two monumental portraits of the curator.’

While de Chirico “sought correction in the ancient world of his childhood in Greece,” the Greek Philadelphian Thomas Chimes went from Neoclassicism and religion to immersion into Artaud and Jarry in the mid-60s, and the resulting metal boxes and panel paintings can be seen in a small retrospective at Philly’s own Washington Square for another week.  Fellow Artaudian Baselitz has a selection at Werner for another fortnight.
Posted by Ian Keenan at 9:32 AM 2 comments: