What's up for two more days..

Piri' Miri Muli' readers who have not set out to DAG Modern for the Avanash Chandra retrospective after my Sept 20 notice are here advised that it closes this Wednesday evening.  Philip Rawson's observation in his 1971 Art of Tantra seems descriptive of Chandra's tantric phase in London:  "Tantra was never concerned with imitating an external world, and so its figures are to some degree stereotypes, puppets stimulating by their visual inadequacy a vigorous reinterpretation in the imagination of the mediator."  Like Chandra, Sohan Qadri who's, last I looked, featured in Sundaram Tagore's 82nd and Madison window, developed his Tantric painting in Europe. 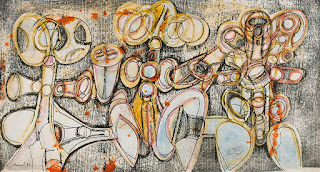 Georg Feuerstein notes "Hindu Tantra.. was introduced to the Western World through the writings of Sir John Woodroffe.. in 1913" (Tantra 1999 xi) after recounting "..within the field of Hinduism, Tantra gradually fell into disrepute..  During the Victorian colonization of India, puritanism drove Tantric practitioners underground. Today, Tantra survives mainly in the conservative (samaya) molds of th the Shri-Vidya tradition of South India and the Buddhist tradition of Tibet, though both heritages also have their more radical practitioners who understandably prefer to stay out of the limelight".. Feuerstein's Yoga Tradition from the same year recounts "opposition in conventional Hindu and Buddhist circles.. Today Tantra is held in low esteem in India."

Rawson's earlier book strikes a similar note: "(Sir John Woodroffe, Calcutta Chief Justice and early translator of tantra) "was writing for a double audience: there were the Europeans deeply infected with Victorian prudery; and then there were the English-speaking Indians who were mostly under the influence of their caste-prejudices, ashamed and violently critical of elements in their own culture, and hence anxious to seem even more puritan than their Western rulers..  (Woodroffe) was standing out against a vocal alliance between an Indian caste élite and Western missionaries who were aiming to get Tantra outlawed.."

It is hard to reconstruct what prevailing attitudes predated British colonization, but Ajit Mookerjee and Madhu Khana's 1977 The Tantric Way suggests "Tantra.. grew out of the mainstream of Indian thought, yet in the course of time it received its nourishment from its own sources, which were not only radically different from the parent doctrine but often heretical and directly opposed to it. In this way tantra developed largely outside the establishment, and in the course of a dialectical process acquired its own outlook. The tantric approach is anti-ascetic, anti-speculative and entirely without conventional perfectionist clichés." (14) 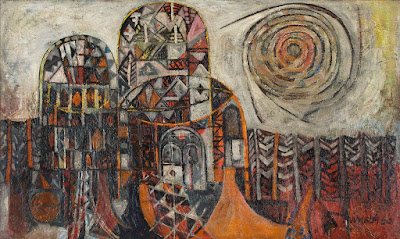 Tantric art in exile inevitably finds itself in a reverse bind: the curiosity and sensationalism directed at its sensuality. "We could compare the state of Tantra in the West with that of Yoga, with which it is related. Like Tantra, the physical side of Yoga is emphasized.. even though those represent a small part of classical Yoga, whose main concern is meditation" (Frawley 21)  After making his way to tantrism by representing urban architecture, his earliest subject, as sex organs (above), Chandra's saṃsāra content focuses increasingly on the natural world during the years Pop Art was pre-eminant, moving from figures outside social contexts to the uninhabited landscape. 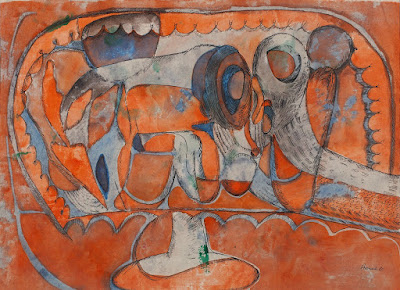 Rawson wrote about ancient Tantra painting "the objective colored surface was never meant to challenge comparison with any sensuously derived image of external reality. It was meant to stimulate radiant inner icons.. to produce a higher key or grade of objectivity than any transient reflection on the retina of the eye, a consistent world of the imagination against which visual phenomena seem grey and pale." (21)  If that reminds one of Duchamp's statement that his art "depended on something other than the retina," Octavio Paz wrote a year before Rawson's book ".. in both cases (Duchamp's Large Glass and 'the Tantric imagery of Bengal represent(ing) Kali') we are present at the representation of a circular operation that unveils the phenomenal reality of the world.. and simultaneously denies it all true reality." (65)  Chandra's paintings of grouped figures actually resemble Duchamp's 'Fauvist' phase of 1910-11 before he encountered Cubism and Picabia, inspired, by Duchamp's reportage "Obviously it's Matisse. Yes, it was him at the beginning."  Chandra features a Joy of Spring..

De Chirico, featured prominently at Helly Nahmad until Dec 23 and in the Surrealist Landscape show next door til Dec 18 (both unsurprisingly Piri' Miri Muli' recommended), called Matisse a "pseudo-painter" but Riopelle, at Acquavella til Dec 11, countered "the greatest is still Matisse, the only painter to have explored all possible techniques.. Luckily for the abstractionists, Matisse did no abstracts: he would have demolished everyone."

Posted by Ian Keenan at 4:25 PM No comments: 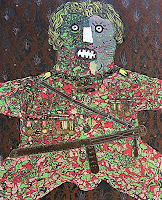 "On view through December 23rd, Enrico Baj (64 East 77th Street) offers the first American survey of Baj’s early paintings since his exhibition at the Museum of Contemporary Art, Chicago, in 1971."

The show in the gallery's three floors features the landscapes, generals, 'heroines,' and furniture phases of Baj's work of the years' preceding Breton's '63 essay:

'It is, indeed, the child within each one of us which is wounded the most atrociously these days. The fact that today it is not simply the child's life but the child's essential nature which is threatened is a monstrous scandal, and one that has affected Baj so deeply that he has felt obliged to launch a frontal attack..

'The stimulus which endows Baj's work with its extraordinary vitality owes is vigor to the fact that he is in control, in perfect harmony with the implicit contradictions, of a device set to sound an alarm and yet, at the same time, to spread joy..

'With regard to fire, he suggests that it is composed of "an infinity of tiny invisible bodies," some of which are round and some pyramidal, which explains why "the flame behaves differently, according to the type and sign of the angles made between the pyramid and the sphere".. As for sight, it "occurs when the outer coats of the eye, which have openings in them similar to those in glass, send out the fire-dust known as sight-rays and is stopped by some opaque matter which makes it rebound back to the home.".. 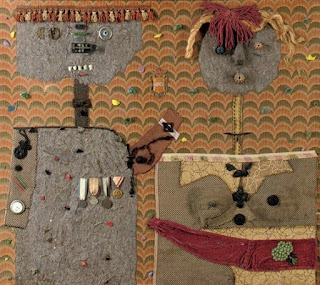 'A quite recent period in Baj's work has singled out from this brutish regiment several incarnations of the 'general is full dress uniform'.. a mountain of importance about capable of giving birth to an intellectual mouse, nevertheless constitutes a menacing survival, particularly from the moment when he sets himself up as being an expert on 'psychological warfare' and in this capacity feeds his tiny rodent on Clausewitz and Mae Tse Tung.

'The general's female companion obviously presents a rather subtler moving target.. the attributes of femininity grant a partial immunity to this heroine of the knockabout farce.'
Posted by Ian Keenan at 11:17 AM No comments: