We are at the 500 year anniversary of Giorgione's death, and while the significance of this is manifold, one of his instigations of the last years of his life was the belated arrival of the landscape genre to the West, which may have come on a merchant ship from the East. It is believed that he left Venice infrequently and spent little time in rural expanses, and one of his incentives for doing so was to seek out patrons willing to pay for secular canvases, "Young Turks" that became part of his particular legend. Such patrons were spread around the country as Botticelli had found two decades earlier in Florence and as Pope Julius had hired Raphael to decorate his library with classical imagery. 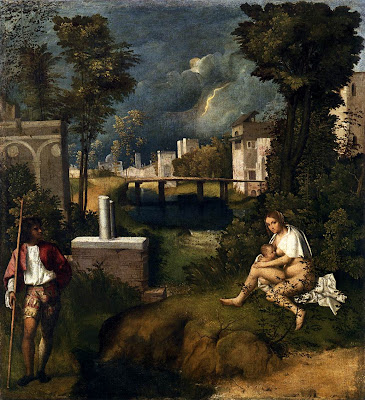 Giorgione's Tempest, which has come to be known as the West's first landscape, immediately sets out to depict cumulonimbus cloud formations, making the highest vertical grid active and rendering the grids below passive, the threatening representation of water balanced by brooks and the maternal images of nursing and the stork. It has come to be a depiction of its interpreters as well as its own subject matter: Judeo-Christians suggest this is a rest on the flight to Egypt, the flight from Paradise or the broken pillar of the Philistines, Classicists suggest it's the abandoned Oenone amid the storm of the Trojan War, fatalists suggest allegorical figures awaiting the storm's destiny. X-rays have shown the figure on the left was originally a female bather, lessening the likelihood of a specific symbolist intention.

The broken pillar has elsewhere been a symbol for death, and traditional Eastern symbolism of the storm has focused on the its dual nature of death and rebirth such as the Japanese god Susano-o and Indra's maruts. The death of 46 people in Maharashtra this month in the early days of the monsoon is culturally weighed against the need for the phenomenon. If Giorgione was aware of harvest rituals it would have added to his incentive for ambiguity, as his Three Philosophers clearly indicates his integration of Eastern ideas.

Those who dispute a symbolic strategy are more likely to suggest that the characters are gypsies on the periphery of the city, literal personifications of the convergence of East and West. This motif has been developed in modernity by Manet and Picasso, examples of both which can be found the DC's NGA and suggest a newer symbolism that can be approached only by visual observation. Courbet never used classical or religious symbolism in his landscapes save for his use of water and female figures in his "the source" series; Pisarro proceeded similarly. The storm was a common subject of Mannerism as with El Greco and where classical or Christain iconography fell out of favor, a Baroque fatalism remained as with Donne's The Storm, inspired by his sailing as a young man against Spain in the late 16th Century where his proud, sheltered British self-image is imbued with reverence for Nature, or Shakespeare's use of the tempest to represent the divining art of theatrical illusion. A few years later the Christian allusion would return with Rembrandt's only seascape, The Storm on the Sea of Galilee, 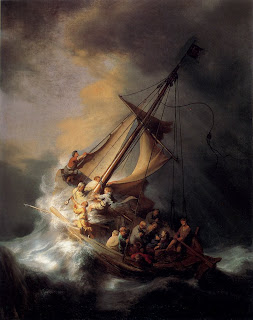 an episode that Delacroix would paint repeatedly, which used Christ's sleep to illustrate calmness in the face of chaos and being at one with nature. 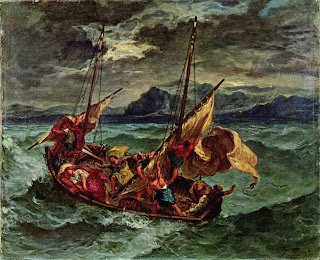 The storm taken up by Edvard Munch, the figures are again in the foreground, but with none of the contentedness of Giorgione's figures or Christ on a boat. 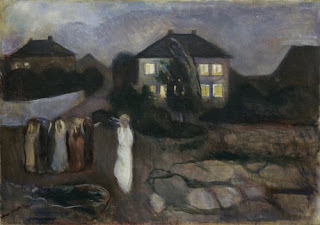 The storm becomes an allegory of representation in Magritte's Threatening Weather: 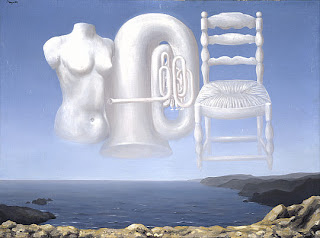 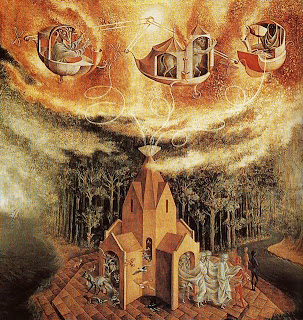 When George Grosz moved to America he began to paint landscapes with none of the social commentary (and people lost interest in him as a result). The American depiction of the storm has mostly followed the same vein, as with John Marin's storms-for-storms-sake (Storm Over Taos). 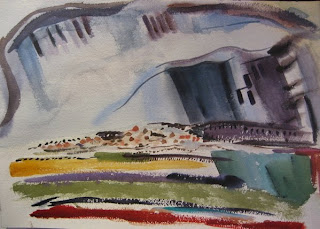 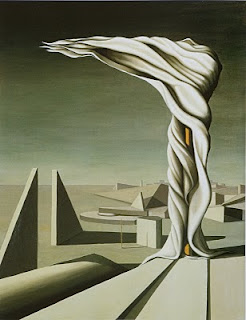 All these potential uses for the storm in painting were contained in Giorgione's canvases.
Posted by Ian Keenan at 7:50 PM No comments: 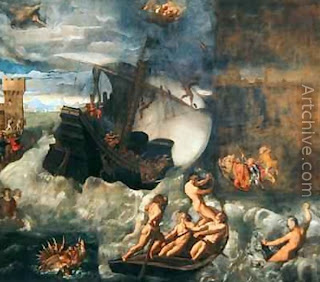 I'm not aware whether this painting (The Sea Storm) I was looking at today in reproduction has been speculated about before as an influence on Turner. Jacobo Palma il Vecchio was believed to have been working on this commission when he died in 1528, so the task fell to Paris Bordone to complete it within the next few years. Venice's Accademia acquired it in 1829, while Turner's visits to the city were increasing in frequency. Turner painted the academic Dutch Boats in a Storm in 1801, the landscape Snow Storm: Hannibal Crossing the Alps in 1812 and some spare watercolors of sea storms before this. A year after the acquisition Turner produced 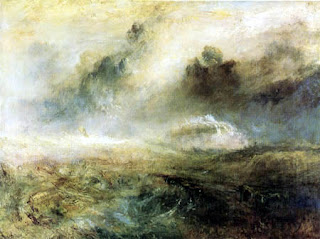 Rough Sea with Wreckage, then starting a decade later a flurry of storm oils, beginning with the seminal Slave Ship, which places the figures overboard in the lower right hand corner 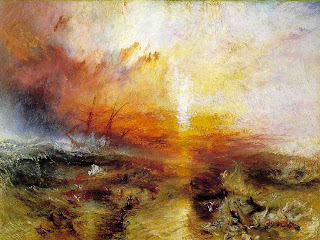 Then all this within the next few years: 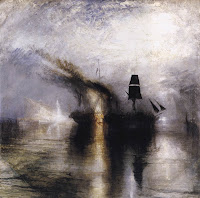 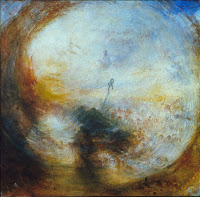 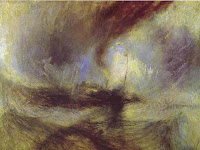 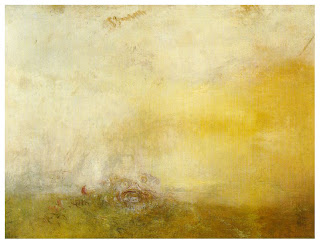 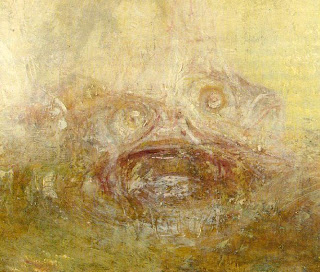 (detail) Ever wonder where this guy came from? Just sayin'. A little shout out for Palma Vecchio. I go to bed now.
Posted by Ian Keenan at 1:56 AM No comments:

I just had my "back to the metal chair" moment, the moment when I return to the relative comfort of the metal chair in the space where I perceive thunderstorms in the evening, disappointed somewhat that it has ended but assuming by the absence of lightning that my return to the chair will not lead to the story line "he was sitting in a metal chair during a thunderstorm, all his books unfinished." I need to find a wooden chair that is comfortable as the metal one so this resigned transition is no longer necessary, as opposed to the uncomfortable and somewhat unsightly Ottoman stand-in. There have been so little in the way of cumulonimbus clouds this spring that the symbol is placed on the weather forecasts strictly out of habit, but I assume this is temporary, if blogging changed the weather I wouldn't blog. Likewise blogging will not alert birds to new feeders and my enjoyment of English is precisely its imperceptibility to the avian hierarchy, as the one baby finch with brown stripes seems to have little incentive to report its discovery.
Posted by Ian Keenan at 5:38 PM No comments: