Posted by Ian Keenan at 8:10 PM No comments:

After visiting the Whitney yesterday I changed three sentences from the Oiticica post, transcribing the exact quote from the Tropicalia card:

“The Whitney’s curatorial description card for Tropicália says “Tropicalia represented a political and aesthetic position against both the social conservatism of the right and the left desire for a 'purely Brazilian' art free of postcolonial oppression," neglecting to say that the movement occurred during a US-backed military coup that caused many of its practitioners to leave the country.  Are they attempting to say Oiticica and Caetano Veloso were okay with all or some 'postcolonial oppression?' a statement that would be factually inaccurate as it is absurd.”

I seriously don’t want to ever go to that museum again.  I would like to see it turned into a chicken farm so as not to disturb the meatpacking district further.  People can pay a nominal admission to visit the chickens and lounge on the balcony eating rotisserie, and the chicken farmers will have to treat the chickens well for the gawkers. They can also have a floor for tofu production.  I thought of pigs but there are no doubt many Jewish and Muslim donors that ponied up for the building.  Then when people talk about how great Shanghai etc are, New Yorkers can say they have a chicken farm designed by Renzo Piano.
Posted by Ian Keenan at 8:08 PM No comments:

What's up for three more days and an hour or so, v. XIV 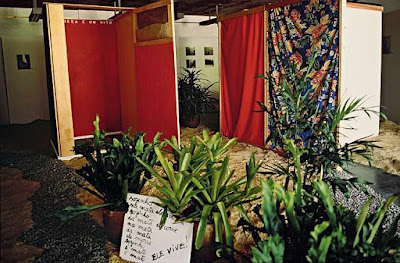 Piri’ Miri Muli’ readers may know I haven’t been a fan of the Whitney, but they have this Hélio Oiticica retrospective that seems to be mostly put together by the Carnegie in Pittsburgh.  Someone’s giving me passes so the question of whether the scant gallery space found in such a large building is worth the $25 doesn’t arise, but now’s the time to go if you hadn’t seen the Hélio show in Chicago or Pittsburgh. In fact, until this show I hadn’t even been to the new Renzo Piano construction, replete as it is with balconies that afford tourists and urbanites the ability to look down on the tourists and urbanites on the High Line soon to be looking down on art/lifestyle inspired gentrification projects carving up the Meatpacking Districts.

Their "protest" show is a characteristically all-American affair with no references to current wars. On the top floor you have a circle of Calders dominated by a wine bar in which crowds of people stand around waiting for a staff member in a laboratory cloak to show up and tap a half dozen kinetic works.  Like most American art museums, the selections from the permanent collection are strongest in outsider art; the insider art appears to have been chosen by the editors of Art in America. The all-American works are joined by a George Grosz print created when he was in Germany, decrying nationalism, thus projecting the museum’s nationalism on the viewer so scolded, like when US presidents sanctimoniously bully pulpit against their own policies. 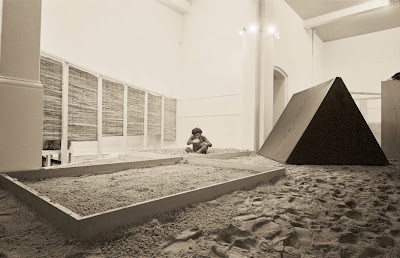 But there is this Hélio show!  I strongly recommend arriving as the museum opens, going straight up to the Hélio floor, turning right and going to the shoe removal area, then looking to the right hand side of the Eden installation for a rack of Parangolés (cape like attire made for Carnival) to wear while walking around Eden and Tropicália, installations evoking “the Dionysian space" of the Morro de Mangueira, as both are much more enjoyable with the Parangolés on.  This rack is not to be confused with the room of Parangolés with a mirror straight ahead from the entrance in which you are not to leave the room with one on, which I found out when I tried to wear a cape while lying on a hammock on Cosmococa Hendrix room (“CC5 Hendrix-War, 1973”). 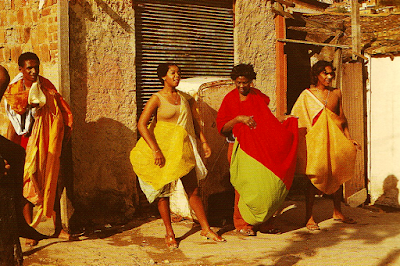 The Whitney’s curatorial description card for Tropicália says “Tropicalia represented a political and aesthetic position against both the social conservatism of the right and the left desire for a 'purely Brazilian' art free of postcolonial oppression," neglecting to say that the movement occurred during a US-backed military coup that caused many of its practitioners to leave the country.  Are they attempting to say Oiticica and Caetano Veloso were okay with all or some 'postcolonial oppression?' a statement that would be factually inaccurate as it is absurd.  The American museums’ current embrace of Brazilian art and music comes during the presidency of Michel Temer, currently enjoying an approval rating of less than 3% and known by leaked documents to have been a CIA informant, who has himself stated that his predecessor’s, Dilma Rousseff’s, impeachment by corrupt senators despite the fact that the Senate’s own investigatory board found the president not guilty, as told to The Americas Society in September 2016, was a “process (that) was established which culminated with me being installed as president of the republic” because of her resistance to “widespread cuts to social programs and privatization,” and this past April confirmed Rousseff’s account that her impeachment was opened by a legislator, Eduardo Cunha, in retaliation for an investigation into his bribery by the state oil company.  During this last month of Helio’s three-venue US tour the CIA’s hand-picked president was indicted for heading Cunha’s racketeering operation.

A friend of Veloso convinced him to use the name of Oiticica’s installation for his song, which starts with the spoken word rendition of the Carta de Pero Vaz Caminha “When Pero Vas Caminha discovered that the Brazilian land was fertile and lush, he wrote a letter to the king saying that all that is planted grows and flourishes. And the Gauss of that time recorded it.” Augusto de Campos called it "our first Pau Brasil song"

Veloso said “all of that Tropicália thing was formulated inside me the day I saw Terra em transe,” Glauber Rocha’s film in which Paulo the Romantic poet and Sara the leftist revolutionary go to work for Felipe Vieira, who after being elected governor breaks his promises and is overthrown by a right-wing coup; the film was released three years after Brazil's military coup ousted liberal president Joao Goulart.

Robert Stamm wrote in 1974 “Terra em transe points the way to a possible political cinema which avoids the twin dead ends of a condescending populism on the one hand and an aridly theoretical reflexivity on the other.” No surer evidence of this can be found than in how the New York Times’ Roger Greenspun went to great pains to bury the film in 1970: “To a degree, the failure of "Earth Entranced" results from its unwillingness to accept the fictional logic of its melodramatic plot. But to a greater degree, that failure rests in every scene, in the development of every idea, in every decision about placing and moving the camera and composing each individual shot. Where you can sense the movie going wrong most significantly is not so much in the gratuitous complexity of the larger moments.. as in the rhetorical emptiness of the smaller moments.”

CC5 Hendrix-War here joins CC1 Trashiscapes, featuring pictures of Buñuel as well as his friend Luiz Fernando Guimarães (right) in a Parangolés which the Hirshhorn re-enacted five years ago, as the two Cosmococa rooms from the five he created during his New York years, which were all shown together twelve years ago in Rio.  A visit confirms that two are much, much better than zero, but the other three are CC2 Onobject with Mondrian-colored foam forms dedicated to Yoko Ono, CC3 Maileryn, a room full of balloons dedicated to Ms. Monroe featuring Heidegger’s What is a Thing?, and CC4, a swimming pool dedicated to John Cage’s Notations.  The ‘Block’ in the series title Block-Experiments in Cosmococa- program in progress is a stated reference to Haroldo de Campos’ book of poems Galáxias (“BLOCOS: they relinquish the defined sequence.. they even benefit from the random sequence and their shifts”), also stated is the reference to Decio Pignatari’s beba coca cola (below). “I don’t care about the the integration of the arts, I simply don’t see where there’s a difference between them.” 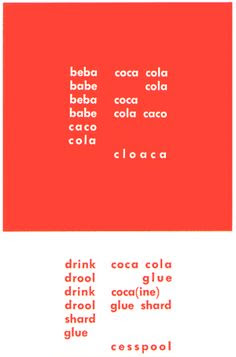 Even if you miss this Hélio wrote “The main point in considering an EXPERIMENTAL activity is in not limiting such an activity to its originators but of creating multiple let-outs for collective and individual participation as an experimental exercise in liberty.”  Helio financed his stay in NY those days by dealing cocaine, and his inclusion of the powder (much cheaper then) can be seen as a reference to South American kitsch akin to the parrot in Tropicália, as Quechua music included in the soundtrack evokes the sacred use of the plant, and to an object entered into consciousness on top of sight, sound, and the touch of the hammocks and nail files.. the sound of the swimming pool which he considered Cagean.  Two years before the project, he wrote to a friend from New York ‘i don’t know what is going on here, but there is such a bourgeois art scene, conformism and reactionarism going on, unbelievable’ and upon returning to Brazil he managed to quit the blow.

Posted by Ian Keenan at 2:10 PM No comments: 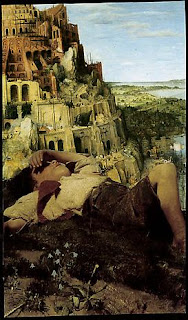 Just as matter cannot be added to or subtracted from the universe, or energy destroyed, so with something real, that is, real in the sense you understand it and understand it. When will you realize that your dreams have eternal life? I of course don’t mean that you are a moonstruck dreamer, but that they do exist, outside of you, without your having to do anything about it. Even if you do something it won’t matter. And it is possible that you will always remain unaware of their existence; this wont matter either, to them, that is. But you must try to seize the truth of this: whatever was, is, and must be. The darkness that surrounds you now does not exist, because it never had any independent existence: you created it out of the spleen and torment you felt. It looks real enough to hide you from the light of the sun, but its reality is as specious as that and a mirage. The clouds are dispersing. And nothing comes to take their place, to interpose itself between you and the reality which you dreamed and is therefore real. This new arrangement is already guiding your steps and indicating the direction you should take without your realizing it, for it is invisible now; it still seems that it is lost for there is of course no tangible evidence of it: that happens only once, it is true. But now to have absorbed the lesson, to have recovered from the shock of not being able to remember it, to again be setting out from the beginning - is this not something good to you? You no longer have to remember the principles, they seem to come to you like fragments of a buried language you once knew. You are like the prince in the fairy tale before whom the impenetrable forest opened and then the gates of the castle, without his knowing why. The one thing you want is to pause so as to puzzle this all out, but that is impossible; you are moving much too quickly for your momentum to be halted. How will it all turn out? What will the end be? But these are questions of the ignorant novice which you have forgotten about already. You think now only in terms of the speed with which you advance, and which you drink in like oxygen; it has become the element in which you live and which is you. Nothing else matters. 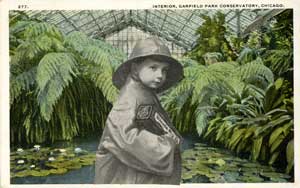