What's up for three more days 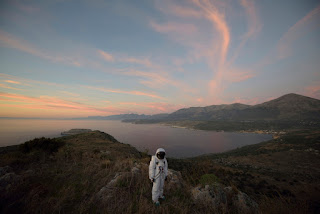 A note that London's Lisson Gallery has opened an outpost on 24th St and in what I believe is their second show there at no. 504 through Saturday screens two of Ghanese documentarian John Akomfah's 2016 multiscreen projections, totaling a bit under two hours, about which he's confirmed the influence of Angelopoulis and Kubrick's photography of humans and beasts. The time image of both directors is compressed and scattered: in Kubrick's case, with 2001's primate and the astronaut in successive shots in the slightly longer three screen The Airport, filmed in an abandoned airport in Greece and on a pedestal overlooking the Parthenon over Athens, recalling Godard's visual citation of Greek theater in Film Socialisme.  Voice overs of episodes of Greek history chronicle the modern nation's interactions with colonizers by war and finance, but omits its turbulent internal politics in what appears to be in keeping with Akomfah's subject matter derived from his perch in the Brexit-era empire he emigrated to.  The soundtrack reminds me of Cage's Europera but with the obligatory mixing in of Arvo Pärt excerpts.  Acts of Faith on two screens intersperses the landscape of Barbados with actors dressed as religious migrants and freed slaves. Nearby Tina Kim's group show has a wonderful Anselm Kiefer in the back til the end of the month (525 West 21st Street), a Paul Outerbridge retrospective til Sept 17 at 535 24th, and Robert Mann at 525 West 26th has for sale a print of Cartier-Bresson's On the Banks of the Marne (below), various Harry Callahans and other summer beach fare til August 19. 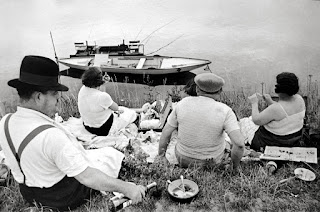 Posted by Ian Keenan at 1:11 AM No comments: