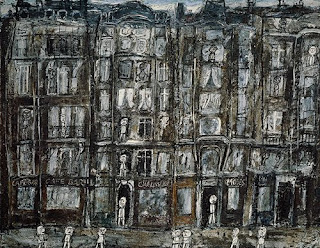 Blacked out for 46 hours, recalling my emotional stake in electricity: I like to read by candlelight but someone told me once "it's hard on your eyes." What I like about electricity is reading at night, reading blogs instead of newspapers, pushing buttons on a laptop that make books appear in the mail, some movies. Every way that electricity can make you stupider is utilized to the fullest, including by writers. This past week I've been into Dubuffet's writings, quite helpful and freeing, including "every year there are small discoveries like the telephone or the airplane, and these small discoveries ultimately have no importance for man's mind, his condition, or his sense of life. When a Parisian who's got gas and electricity in his home speaks with a villager who cooks in a fireplace and uses a kerosene lamp, it won't take him long to realize that the villager is nevertheless not supider than he, and that things like gas and electricity are trivial, highly trivial matters, that in no way modify or even scratch the position or structure of man."

What I was driving at with Matta was first described by his precursor Duchamp: "Simply, I thought of the idea of a projection, of an invisible fourth dimension, something you couldn't see with your eyes. Since I found that one could make a cast shadow from a three dimensional thing, any object whatsoever - just as the projecting of the sun on the earth makes two dimensions - I thought that, by simple intellectual analogy, the fourth dimension could project an object of three dimensions, or, to put it another way, any three-dimensional object, which we see dispassionately, is a projection of something four-dimensional, something we're not familiar with." This is at the heart of what is accurately called conceptualism, when conceptualism is being helpful to expression - the combination of the retinal and the non- or super-retinal, the invisible dimension which the literary art has through the centuries attempted to illustrate in different ways.
Posted by Ian Keenan at 9:12 PM No comments:

I'm at the community library, still blacked out.

Supposedly Roberto Matta was one to read any theory that may possibly apply to painting, and there was an early period of about six years when he would mostly use a blue-yellow color scheme, so I am entertaining the notion that this period was influenced by Goethe.. perhaps influenced also by Turner's application of Goethe. Turner's Deluge series has been at the Tate for some time. I generally don't have editors influencing my thought process, but a large press editor who lives in a flooded area was staying here and when I told him about the Tate, he said that it was possible Matta saw the image in a book. See what I mean! That ruins my whole practice of trying to GPS an artist's movements in order to chart their influence tree - artists see things in books. My main point, though, is that both Turner and Matta used the symbolic aspects of color (day/light, night/darkness) both in representatation and as emotional prompts, to stage an allegorical realm - Turner using the image of a shaved Moses in After the Deluge and Matta developing his own iconography for this practice. The storm was itself relaxing for me, nothing weighty flying around and less death than anticipated. I took in practically the whole thing in my observation chair with only a 2.5 hour sleep break Saturday night, there appeared a mosaic of the ocean for which I had left out the painted tiles and the waves put each in a separate space, some words so shaking their obstacles.

Posted by Ian Keenan at 2:48 PM No comments:

Turner's most primary application of Goethe's theories of color in his Deluge series (1843, a year after the painting in yesterday's post) was that blue is the primary derivative of darkness (Evening)... 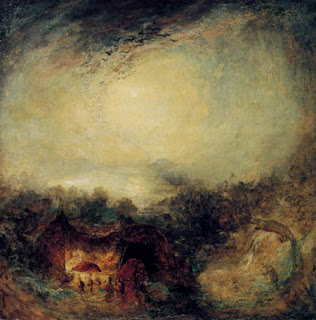 and yellow the derivative of light (Morning)... 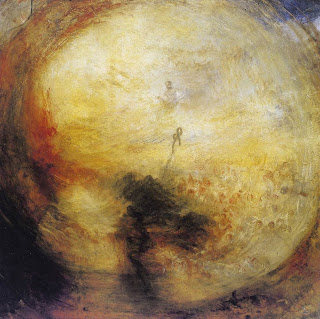 Posted by Ian Keenan at 2:51 PM No comments: 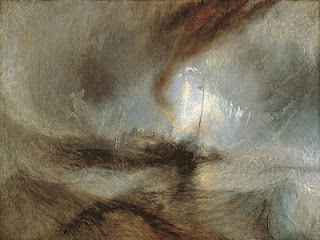 Hard hat, goggles, Turner books that can get wet. Took in some folks from the shore that lavished me with gifts but evicted them because they were interrupting my train of thought and compromising my latest literary affectations.
Posted by Ian Keenan at 11:33 PM No comments:

I was writing about books as a physical phenomenon this hour when the East Coast earthquake happened and a few books fell, a very mild affair (5.8 in Virginia) that played on the locals' cluelessness of such things. My first. Of course I didn't think it was an earthquake, and the only explanation I could muster was that there was a very large animal on the roof, although no particular species could credibly fit the bill for size, behavior, or proximity, so it became a sort of hypothetical animal - perhaps human or partially human - that adopted its own mythological dimensions, and I circumnavigated the house with a baseball bat to satiate my curiosity about this animal and make sure it was not rummaging through my desk.

Years back I was going out to write in a small shack in the yard at 3 am where I had my computer set up, and apparently a passer by called the cops, so when I was immersed in a paragraph I looked through the window to see a SWAT team making its way through the brush towards me. The light was on above me and when they saw me typing they got back in the van and left. I thought, "this must be a good paragraph."
Posted by Ian Keenan at 2:34 PM 1 comment:

I've actually been working on some reviews of recent books of poetry.. six in all, for here or elsewhere. Three of them are positive, one is mixed, two are negative. I'm thinking of making one of the positives more mixed and giving one of the negatives a better consideration. I did "Friday capsules" a while back and was going to do five the following week, but wanted to re-read a book I was going to pan, that I read but didn't buy, but never did so.

I have criticized logrolling, but I think if logrolling were a major crisis people would react differently to it. If you don't like the state of criticism, do it better. Obviously as someone who has defended Silliman's blogging, that was for me sort of a formative experience of contemporary criticism, and I was motivated by respect for him, but not so formative as I thought there was anything unusual going on, as I expected there to be some backlashes against what he was doing. A lot of the "lack" of negative criticism of small press books arises from the feeling that they are up against enough. But Silliman's crit often took the form of criticizing the stylistic foundations of works that were well realized, which is often the most useful negative criticism rather than "so-and-so is a lightweight." Cahiers du Cinema, when negative, criticized the foundations of works that were well realized.

I don't think film or art criticism has done much to improve those genre. The negative reviews of Andrew Sarris seem suspect to me, even if his positive reviews make me want to see a film. What film reviews do best is publicize the product in the newspapers, but this has comprehensively resulted in a declining medium. Most negative art reviews I read are garbage. Frank O'Hara's art commentary, such as it was, set the standard for only being positive in what he said, even when quietly acting to impose limitations on the medium. Ashbery says he only reviews art that he is very interested in, i.e. positive. The others in that town mostly followed suit. There is no golden age of literary criticism. Thomas Mann presumably writing Lukacs into the Magic Mountain was contrary to pattern, the way most good things are in this racket. What we have now is a vast improvement over what we had 40 years ago.

But in general I have been trying to focus on finishing up creative things in recent months and my internet interactions have been unfortunately limited to responding to things that really irritate me. I have enjoyed some recently published books. I would perhaps like at some point to get a lot of free books in the mail and gab about them, but I have difficulty - or cultivate difficulty - with what I'm writing as it is, and don't need to seek out more distraction.

Posted by Ian Keenan at 9:15 PM No comments:

I just found a live version of this for Spanish television with the choir which is quite dramatically enacted but medleys into the sudden (spoiler alert) appearance of Lagartija Nick for a different tune.. I would have liked to have heard the whole song on its own live..

Speaking of cantaores, someone uploaded my two favorite El Lebrijano songs, which are from his album Grandes Cantaores de Flamenco adapting verses from the Sermon of the Mount (Spanish versions in comments section):

Lay not up for yourselves treasures upon earth,
But lay up for yourselves treasures in heaven..
Behold the birds of the air: for they sow not, neither
do they reap, nor gather into barns;
And why take ye thought for raiment? Consider the lilies of the field, how they grow; they toil not, neither do they spin:
And yet I say unto you, That even Solomon in all his glory was not arrayed like one of these.

Beware of false prophets, which come to you in sheep's
clothing..
Enter ye in at the narrow gate: for wide is the gate, and broad is the way,
that leadeth to destruction..
Ye shall know them by their fruits.
Inwardly they are ravening wolves
Do men
gather grapes of thorns, or figs of thistles?
Beware of false prophets..

Manolo Sanlúcar is on guitar in those two tracks.. of whom there's a fair amount of footage online such as in the Saura film with Diego Carrasco singing "I am a gypsy, from the salt of Cádiz" and the women in the back singing "ay, lemon seller, give me some lemonade.."