Closing this weekend is Sunaram Tagore's display of two large canvases by Sohan Qadri, who claims to have beaten Magritte in chess during the painting of "Ceci n'est pas une pipe," at its 1100 Madison outpost of to go with a generous sampling of his different phases at DAG Modern (41 East 57 Street, Suite 708, til Sept 12), an artist often pigeonholed by Indian critics as a tantric spiritualist. Moving pemanently to Copenhagen in the 70s where he was one of the founders of the Christiania squat may account for his omission from After Midnight, itself up til Sept 13. 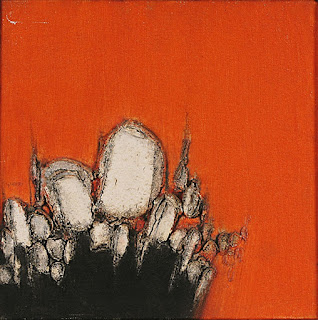 A Hindu master living on his family's farm in the Punjab asked Sohan at a young age "to inscribe yantras (geometric designs used as meditation tools) on his mud walls." In his book on Mallarmé, Thomas Williams cites the "Ses purs ongles très haut…" sonnet to illustrate his contention "the pure poem is the one that exists solely on the yantric level." "The yantra, etymologically an 'instrument for giving the mind control,' is an image or geometric design used in certain systems of yoga to aid the mind in its movement out of time and space and into the absolute.. The yantric function of the poem exists on a non-discursive level. It emerges quite mysteriously from the sounds, rhythms, images which together make the whole work. On a discursive level, a poem may make statements about the absolute; on the yantric level, which, mistaken for statement about, may even seem nonsensical, it opens a way into the absolute.. The success of a poem as yantra is felt rather than understood.. The meaning of a yantric poem is one that the poet or the reader 'recognizes by sensation.'"  "The aspiration of the being towards the Universal with the object of attaining an inward illumination" (Guénon) "a concentrated visualization and intimate inner experience of the polar play and logic-shattering paradox of eternity and time." (Heinrich Zimmer)

Of "Ses purs ongles très haut…" Badiou suggests "The nymph would also have been totally done away with in the mirror were it not for the appearance of the reflection of a costellation.." (54) Williams: "The mirror is pure openness to Being.. In it is reflected the Macrocosmic order itself.. In this instant the finite and the infinite, the mirror and the heavens, the poet and the universe, have become One."(56) Qadri's progressive Sikh parents insisted he bounce around between Sikh, Hindu, and Sufi masters growing up, of which the Sufi "practiced this tantric meditation all his life and gave me this mirror which I carry everywhere. It's not narcissism, it's the exact opposite: it's transcending your self." "You start with the mantra, then you go beyond it; when you have this mirror, you start with the body, then go beyond body. Painting does the same: it's a mirror, but if you get stuck in the mirror and start interpreting-"this is good," "that's bad"-then you lose the painting, it does not seep into your system."

Qadri's maxim "Only emptiness, I feel, should communicate with the emptiness of the canvas" seems a rather strict application of the Prajñāpāramitā Sutra, which says "Emptiness is not separate from form, form is not separate from emptiness; Whatever is form is emptiness, whatever is emptiness is form." Qadri says "the flow of Shakti (prana or life energy), is the cause as well as the effect of all creation, including its beginning, its continuity, and its dissolution" - Shakti is represented in tantric art in both abstraction (the triangle pointing down in a yantra) and figuratively (emracing Shiva "which is static" (Qadri, seeking as he says a serene response to Shakti)). This approach to abstraction calls to mind Tàpies' (below) wish "to start again from scratch" in the 50s "I read a great deal about Eastern philosophies.. this destruction in quantitative terms led to a qualitative transformation. Destruction was succeeded by stasis and calm." 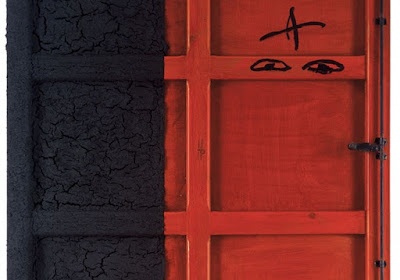 Posted by Ian Keenan at 2:14 PM No comments: