The pre-Lenten Carnevale of Ottana near Nuoro in Italy's Sardinia dates to the Pagan era, eluding all conclusive historical explanation and appearing to have changed little; the costumed Mamuthones have been speculatively likened to Dionysian cults but are believed to descend from a pre-Christian harvest ritual. This camera angle foregrounds the two species connected to a cord, one brandishing a whip, defying Bataille's "There is nothing in animal life that introduces the relation of the master to the one he commands" in Theory of Religion, which springs from a quotation that begins Kojève's lectures on Hegel for Parisians: "The very being of man, the self-conscious being, therefore implies and presupposes Desire. Consequently, the known reality can be formed and maintained only wheitin a biological reality, an animal life. But, if animal Desire is the necessary condition of self-consciousness, it is not the sufficient condition. By itself, the Desire constitutes only the Sentiment of self." Kojève's lectures move to the comparison of the master/ slave dialectic in the Christian world, in which the Lamb of God undergoes the human sacrifice of Lent, where 'the Christian Slave can affirm his equality with the Master only by accepting the existence of an "other world" and a transcendent God... the pagan State recognized only Masters as citizens.' Bataille gathers from that 'we must confine ourselves to regard animality, from the outside, in light of an absence of transcendence. Unavoidably, in our eyes, the animal is in the world like water in water.' Bataille quoting Ecce Homo "Have you understood? Dionysus facing the Crucified" evokes the ritual.. "Goethe.. served Nietzsche as the model of that Paganism he opposed to Christianity: here was the 'new barbarian' - the overman with the 'Dionysian faith.'"

A few years ago a man on the vantage point of the raised walkway above the elephants at the DC zoo held fort to his wife a reductive view of animal consciousness forcing me to move away from him quickly to dissipate my anger. As Kundera says the common man is closer to an animal than Goethe, the domesticated animal that performs at a circus is more akin to the standard shorthand of Goethe or Hegel than the animal that, somewhere in the wilderness, develops a consciousness as sublimely alien to mine as Goethe is alien to it. Ergo I am allied against Hegel and Bataille's contrivance of the conscious and dialectical human seperated from perceived animal 'sentiment,' in agreement with Frank O'Hara who begins with ("Animals")

Have you forgotten what we were like then
when we were still first rate
....

the whole pasture looked like our meal
we didn't need speedometers 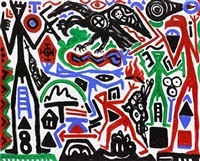 A.R. Penck's pictographs visually resemble Egyptian hieroglyphs, while the content of hieroglyphs resembles more closely the two-dimensional symbolism of Joaquin Torres-Garcia, who, though not aligned creatively with a political state, sought to establish "a universal law that would raise man above the level of individuality; for it is the individuality that separates men, while the universal law is what unites them." Jack Cowart wrote Penck "(proposed) a sort of tortured negative proof: I am not - therefore I am, or vice versa." Baselitz said that GDR Socialist Realism was possible only because Nazi art was not sufficiently reflected on: the 'systems' of Penck, for whom Michael Werner used to smuggle his paintings out of the GDR until he moved to the West in 1980, couldn't be any different from those forms. The strokes of Rauch, also growing up in the GDR, share their pictorial realism with Sots-art but little else. Self-taught, previously a drummer for Billy Bang and Butch Morris, the all-pictographic offerings here (4 e 77th, til March 28) are from Penck's recent years in New York. Looking at 2011's "Vulture Flight - Prey" (left) I jotted down 'carcasses of symbols' before I believe I saw the vulture hovering above (though it's hard sometimes to know for sure about these things) or looking at the title on the list. Birds of prey have appeared in his work from the beginning, at times like Broodthaers' Department of Eagles referencing the German Imperial Eagle but in Penck's case incorporated into an arrangement from the subconscious rather than an archive. 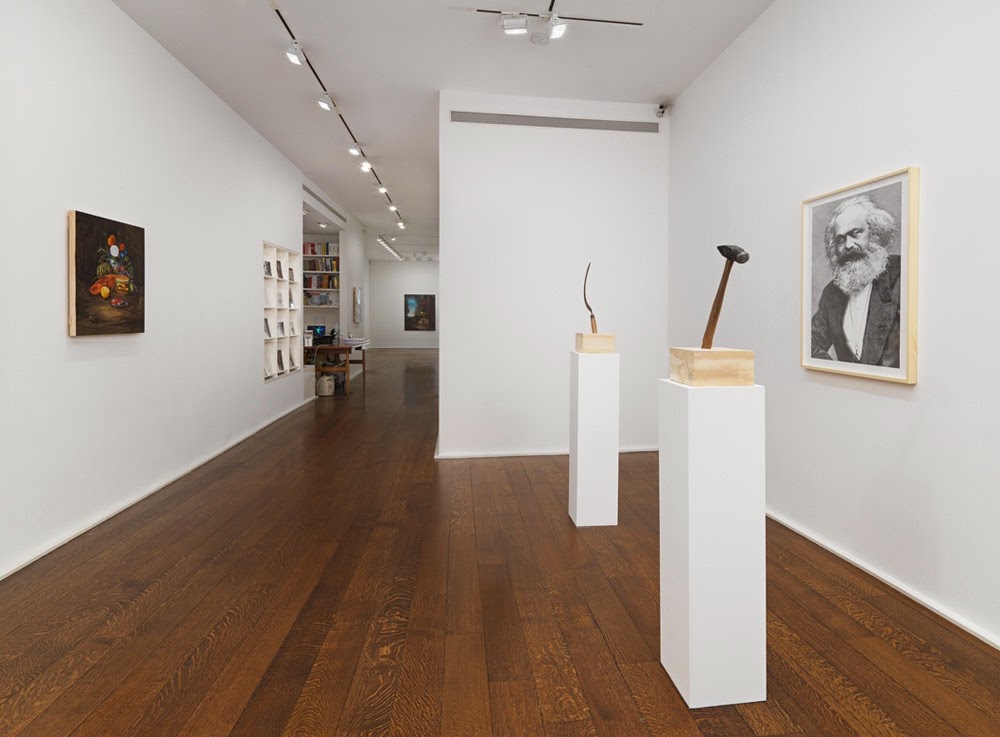 Djordje Ozbolt: "I've had three or four shows in New York, but I had a gap of like five years. This time I felt like presenting something that is the essential Ozbolt."  Whether this is in fact the essential Ozbolt I can't say, but this first show of his I've seen quite enjoyably fills up three floors at Hauser & Wirth (32 e 69th St, til Feb 21) .  There is a tendency to one-off humor, seeking surface reactions, a tendency of painters from the Southern or Western US, as Ozbolt resides in London, along with no shortage of art-historical references (shorthand of Guston and Picasso; Le Déjeuner sur l'herbe) but there are depths here as well, along the lines of Breton finding in Magritte "the great semantic bridge which allows us to pass from the proper meaning to the figurative meaning."  Visitors are greeted with the visual pun of a cross-eyed Karl Marx with the two gazes fixed on a sculptural hammer and sickle, titled "Before they Met," (above) inviting multiple interpretations. "Ye Olde Shrunken Head" fills a tiny wood block inside seven frames that suggest forms of psychoanalytical perception. A Serb, "I went to London in '91 to visit my brother, the war started, and I stayed in England. I couldn't go back because there was a draft for the army. I realized once in London that I wanted to study art," estranging him from what he describes as an insular Belgrade scene. The series "50 Ways to Leave Your Lover," a title apparently arrived at after the series was begun, offers variations of painterly decontextualization from cultural myths with cartoon Primitism of Easter Island guys getting hammered, etc, as well as octopus heads and color fields.  The juxtaposed images in a series recalls recently Clemente's miniatures, as Ozbolt "lived in India and was obsessed with India for a certain period of time."  Also for those who associate Conceptualism with the objectives of some of its recent practitioners (I, II), Hauser & Wirth's London galleries feature Mira Schendel's monotypes (til March 7) from the early years of the Brazilian military government.

If one remains concerned that cultural products will wind up in the hands of the 1% there's the 'Honoring Political Freedom Fighters' poster at the best place to eat in NYC (I will take Thomas Keller more seriously when he puts up such a poster), B&B's African American (165 West 26th, 24 hrs).  I am there constantly, and in my last visit all the customers seemed to be, like the kitchen staff, from French-speaking Guinea, "The most corrupt country in the world" in the words of one diner who went on to ask, after a long political conversation in Fula, his English better than his chat partner, "Why do we kill our heroes? Why do we kill Lumumba?"
"Whenever there is good, there is bad behind."

Forty minutes should be set aside at the Met for Wolfgang Tillmans' Book for Architects which sequentially presents slides of architectural structures of different cultures and classes, causing a hushed silence, til July 5. Also there til July 25th is Motherwell's Lyric Suite, which I hope to type more about later. 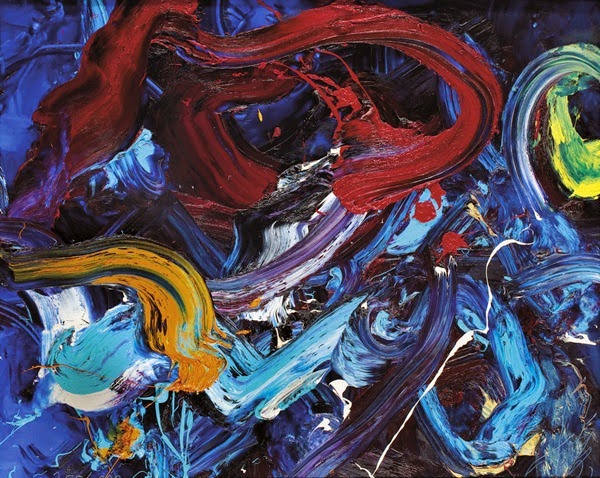 Two shows of Kazuo Shiraga foot paintings (left; Levy 909 Madison til April 4, Mnuchin 45 e 78th til April 11) are in close proximity, while Dallas has Shiraga and Sadamasa Motonaga til July 19..  If you visit in between feeding times, groups of Caucasians may be in evidence, saying to each other "Franz Kline! Ellsworth Kelly!"  Indeed in 1965, Shiraga and his Gutai friends exhibited in Tokyo with Motherwell, Pollock, de Kooning, and Kline, to the consternation of the Japanese art establishment that didn't want them as their national representatives.  Joos van Cleve, Hubert Robert, and Grandma Moses were also Caucasian. "Shiraga was born and grew up in the city of Amagasaki which used to hold extremely rough festivals. Participants would slam into each other with all their might as they carried movable shrines and almost every year injuries resulted; often, those hurt were brought to Shiraga's house. Finally, one day a man who got crushed between two moving shrines was killed instantly right in front of Shiraga. Seeing the vivid color of the blood spread everywhere, the child felt it was 'beautiful.' (183)"  The altar of the Sistine Chapel, painted over the course of four years, depicts Caucasians judging each other.
Posted by Ian Keenan at 8:53 AM No comments:

I promised I would post on the Clemente show at the Rubin again while it was still up and so I pass on this reminder that it ends today. I will post on it again soon, as I have assembled my own early 80s Theosophical Library here and don't want it to turn me out just yet. I have had a basic outline of my interpretation since seeing it.. I faintly recall when the Regina Silveira show was closing in mid-2013, I wanted to write something but had no idea what to say, but then it hit me a few weeks later.

Luisa Rabbia at Blum (20 w 57th) is ending this Saturday.. Rabbia in past years has sculpted homeless people, the 'minor figure, uprooted from any social context.. (in) a non-place where suspension and reticence prevail' (Achille Bonito Oliva). Unlike Francis Bacon's Popes, the isolation of Rabbia's homeless figures doesn't have to be proven or suggested by the composition so their appearance, in her earlier sculptures and paintings, in minimalist planes sound different tones of solitude with the frames around them. As Blanchot says the solitude of the writer is comical 'by using methods that prevent the individual from being alone,' Rabbia seems to seek externally what he calls 'the monster of desolation (who) needs the presence of another if his desolation is to have a meaning,' along with mortality and the will to live separated from historical materialism* of which Schopenhauer wrote 'I cannot really imagine this will apart from my body.' 'Rabbia depicts (the body's) greatest depths, drawing attention to the membranous quality of our skin as it envelops us entirely, assisting in the animation of 'I' and 'we', as living membranes.. The body contitutes the hermetic vase that contains life - while at the same time separating it from that of others.. ' (Oliva) 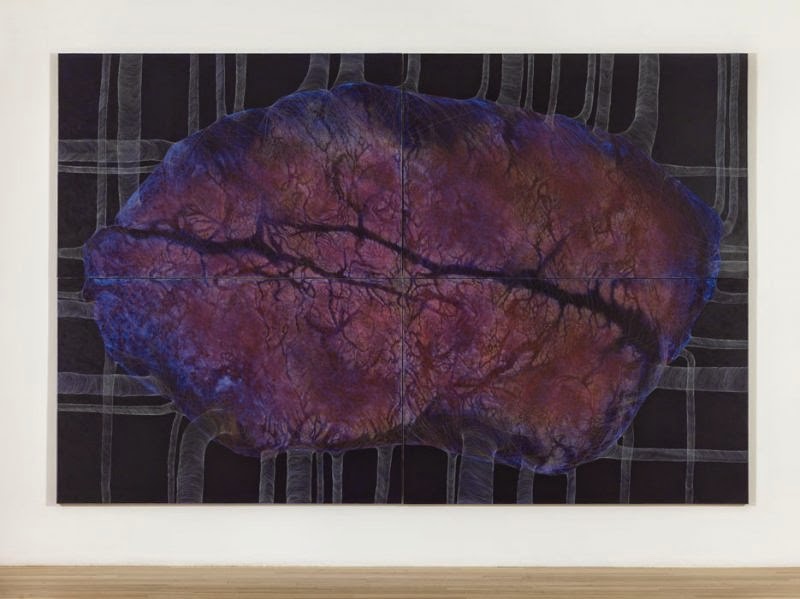 The titles in this show suggest the cosmic body by inverting the appearance of one with the naming of another: two heads placed together are called 'Worlds,' a heart like image surrounded by veins in four directions is called 'NorthEastSouthWest,' patterns from her fingerprints are called 'Pathway.' The title of 'NorthEastSouthWest,' the large scale centerpiece of this show (shown above), resembles a Vastu-purusha mandala,** where the sides of the frame would represent the points on the compass, enclosing 'Brahma's body.. the vastu purusha or "person of the place," who fills the mandala.' (Dennis Hudson) The title suggests the movement of the sun from the rise to set, or from the northern winter solstice to the southern summer solstice. 'Kama (desire) came from the heart', one of nine sons of Brahma that Hudson cites, and what appears to be perpendicular arteries lead out from the central figure, perhaps another representation of the will in isolation.

Also JMW Turner's Liber Studiorum (Book of Studies) from between 1807 and 1819 is at the Public Library for another two weeks.. something about a movie out too..

* Linh Dinh takes great pains to show homeless people inside history
** I am obviously looking at the thumbnails on the the early 80s Theosophical Library laptop.. hope to get to the show later this week
Posted by Ian Keenan at 6:40 AM No comments: