speaking of Italian bands, the bass player for Caboto which broke up in 2007 put some of his perfs up.

With both Acquaragia Drom and them I prefer the first album, and in fact my favorite opera is Monteverdi's L'Orfeo, the first opera that's still being regularly performed, in keeping with my view that genres decline when they develop templates and conventions.

Posted by Ian Keenan at 9:53 PM No comments:

"(Roberto) Saviano said he had witnessed members of some of southern Italy's most notorious mafia families attending Salvini's rallies, and accused Salvini of ignoring organized crime's stranglehold on the south in favour of stirring up resentment against immigrants."

Posted by Ian Keenan at 7:23 AM No comments:

"The whole, as-yet-unformed modern myth rests at its origins on two bodies of work that are almost indistinguishable, by Alberto Savinio and his brother, Giorgio de Chirico" Breton wrote in the Anthologie de l'humour noir which quoted Savinio's explanation of metaphysical painting "Unlike the days in which abstraction reigned supreme, our age tries to draw the complete metaphysical elements out of matter itself (things). The metaphysical idea would pass from the state of abstraction to that of the senses." Friday and Saturday of this week are the only remaining days to see Savinio at CIMA, which had previously presented de Chirico.


Salvinio's familial and archetypal imagery prompted Breton to redeliberate on Freud: "In these two brothers, humor surges from their intermittent but very acute awareness of their own repression." "Prometheus" (above) is commonly viewed as a deconstruction of masculinity perhaps reflecting on, though he was in Paris at the time, Mussolini's recent establishment of supreme authority. Immanuel Kant in 1755: “There is such a thing as right taste in natural science, which knows how to distinguish the wild extravagances of unbridled curiosity from cautious judgements of reasonable credibility. From the Prometheus of recent times Mr. Franklin, who wanted to disarm the thunder, down to the man who wants to extinguish the fire in the workshop of Vulcanus, all these endeavors result in the humiliating reminder that Man never can be anything more than a man” was Mary Shelley's inspiration to subtitle Frankenstein "The Modern Prometheus," the name Kant gave to his essay.

One theoretical riposte to Savinio's Metaphysical aesthetic is from Bruce Chatwin: "Authoritarian societies love images because they reinforce the chain of command at all levels of the hierarchy. But an abstract art of pure form and color, if it is serious and not merely decorative, mocks the pretensions of secular power because it transcends the limits of this world and attempts to penetrate a hidden world of universal law." Pace bills, up til August, “a return to Michal Rovner’s unique, abstracted language” but if there is a hierarchy depicted in her videos of the multitudes at a distance it is that of the human world over nature. "Mordechai Omer notes that Israeli artists who are successful abroad are always the object of unpleasant criticism here. Aside from that, (Rovner's) engagement in political subjects related to Israel infuriates artists who work and show here, as if it were a superficial and irrelevant invasion of an area that is no longer hers." Also from Israel, the denizen Melanie Daniels (537b West 23rd til June 23) quickly names Daniel Richter and Doig as her primary influences when asked: “Daniel Richter: he’s the best living painter as far as I’m concerned. I can look at as his works for hours and they just keep unfolding.” I pretty much agree with this as I have looked at Richters for hours but I don’t try to decide between him and Clemente. Daniel and Peter’s visual techniques are here applied to caricatures of utopian societies.

But clearly the impetus for the Piri’ Miri Muli’ Nations in Focus feature of the previous paragraph is Jerusalem-born Tali Keren’s installation at the Goethe Institut’s 38 Ludlow gallery, which uses drone technology to illuminate the rejected great seal of America designed by Kant’s Prometheus, Mr. Benjamin Franklin, depicting Moses parting the Red Sea in Exodus.  Keren is a portraitist of Christian Zionism, about which Anita Schapira wrote in Israel a History “It was the Protestants who discovered the Bible and extolled its importance in educating the younger generation. Even the idea of the Jews returning to their ancient homeland as the first step to world redemption seems to have originated among a specific group of evangelical English Protestants that flourished in England in the 1840s; they passed this notion on to Jewish circles.”  Keren traces the movement to the translation of the King James Bible into English in the 16th Century. Kovel briefly mentions several cultural examples predating Herzl’s campaign including George Eliot’s 1876 novel Daniel Deronda.

In American culture, especially since 2003, the rationalizations for war differ based on the audience, and diplomatic, electoral and media discourses maintain the pretense of a War on Terror that is not a war of religion.  I stated this to Keren and she said she’s been watching Fox News nonstop and the wars are commonly referred to as religious. Included in the back room are three audio recordings, including the testimony of Brandon Bryant, a rural American that took a drone operator job and later testified that his colleagues learned their craft on video games, that many of them believed devoutly in Christian Zionism, and that the use of drones to kill unknown people in foreign countries was indiscriminate.  In her video New Jerusalem, she produced a chamber piece performed for Jerusalem’s mayor and city council in which the cantor sings a libretto made up of the classified 1967 plan to maintain a Jewish majority for the planned capitol. As with her use of propaganda in the Great Seal and a US-Israeli national anthem for which the audience was made to stand, she reveals the dominant ideology that is hiding in plain sight. 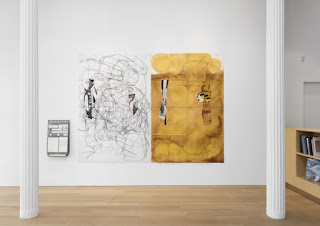 Also ending Saturday downtown are two short Eugenio Dittborn films in the basement of 47 Walker along with new Polke-influenced paintings of his (above), characteristically air mailed to the host gallery.
Posted by Ian Keenan at 6:48 AM No comments:


Up til this Saturday at Henrique Faria (35 e 67th, 4th fl): Alfredo Cortina's photographs of his wife, the Venezuelan poet and playwright Elizabeth Schön, who wrote in 2003 of "un sentimiento reflexivo-intuitivo, llega mucho más allá que el simple hecho del ver" ("a reflective-intuitive feeling goes far beyond the simple fact of seeing"), "como propone Rilke: '…dulcemente debo desprenderme de la apariencia…' Solamente desprendiéndonos de ella, nos acercamos más a ese silencio absoluto que existe y al que no podemos atrapar" ("..as Rilke proposes: '..sweetly I must detach myself from appearance..' Only by detaching ourselves from it, do we get closer to that absolute silence that exists and that we can not entrap..")


A shot from 1957 depicts Carlos Puche photographing her in a rural doorway..

.. and while the past obscurity of this series makes it presumably impossible for Jeff Wall to have seen this in the 70s, it is not without its similarities to "Picture for Women" - not only is the male photographer on the right and the female subject on the left..


..but in both shots there are two vertical lines between the figures - one (the side of the house) isolating the photographer and the other extending from the left shoulder of the subject.  The foregrounding of the figures is inverted but since one is a mirror image that doesn't really count.

Also ending Saturday on 24th St are twelve 5'x7' paintings by Terry Winters at no. 523 and a pedagogical and sculptural offering at no. 531 by Oscar Tuazon referencing Steve and Holly Baer's solar powered home which uses water for heating and cooling, along with Winona's Water School (below) honoring two-time Ralph Nader running mate and Native American activist Winona LaDuke.  Two of Tuazon's structures inspired by the Baers will be installed within anti-pipeline protest sites in Minnesota. 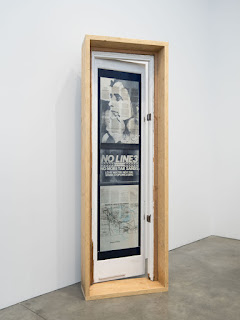 Posted by Ian Keenan at 3:33 AM No comments:

One cannot be judicious about the obit function of a blog fwiw.. for Kovel I re-read about 3-4 of his books after he passed and couldn't find an ideal quote out of context, thinking I would do Robert Parry first as after a great career he'd become in his last months perhaps the US's most important journalist, but I don't have any of his books and his web articles mostly don't strive for crystallizing aphorisms (he died back in January), then after the second day of multiple shootings at the Gaza demonstrations I thought I could find that book of Kovel's under a pile and there it was. Piri' Miri Muli' readers know you don't have to die or comment publicly on the Middle East to be mentioned on my blog, but

I'm struck by the outpouring of gratitude for Bourdain by Mexicans, who will have in a few months an elected anti-corruption president with a majority of the country's support while the gringos have a military junta run by a sexist ethnic supremacist billionaire that mysteriously outperformed exit polls in battleground states. One of AMLO's least remarkable moments was hiring Giuliani as a consultant for Distrito Federal, so perhaps a future leaked transcript will tell us if "Rudy es Rudy" is indeed a diplomatic icebreaker this fall.  I recall Bourdain's plebeian critique of vegetarianism, of which my longest attempt was spoiled by a trip down south. A fellow New Jerseyan I was also thinking the other day of blogging that I had discovered putting pork rolls (down here we don't say Taylor) in the George Foreman grill, not finding another mention of that preparation online, in addition to my breakthrough of Dan Dan Scrapple Noodles using Spicy King brand Dan Dan sauce which contains those peppercorns, best enjoyed in these environs at Flushing's Golden Shopping Mall, that couldn't be imported to the US til 2005, but my cholesterol is high and ..

Posted by Ian Keenan at 8:22 AM No comments: