Lots of good shows but I hope to get back to this next week, as I'll be offline again for a few days. just what's ending..

Piri' Miri Muli' readers venturing to guess I prefer Helen Lundeberg's Surrealist period to her later minimalist works find me predictable again - these are representational Western US motifs influenced by O'Keefe, bu t well worth a visit at 540 27.

Ernesto Neto's theme is that we wouldn't be here but for the serpent in Eden and the fall of man, illustrated by textile works for which you have to take off your shoes, but my the time I had tied mine back on I realized that my ski cap was missing on a cold day, but for some reason I felt the need to visit the second floor with my shoes on before removing them against to find, as I suspected , that my hat was knocked off by the exit from the duct of yarn. 521 21st..  near Eggleston photos from the 80s at 537 20th. 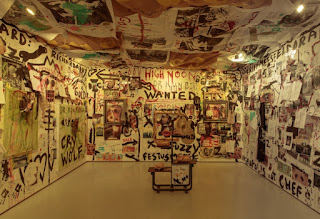 Nolan Gallery's copy suggesting Jonathan Meese 'seeks to adopt ideological symbols and empty them of meaning' fits too smoothly into the flow of Postmodernnism for my tastes. But what's not to like - there's a John Wayne themed enclosure (above) + a Western themed diorama for Americans strollers to derive self satisfaction from - and some of the Meesian poetic oeuvre is on display (527 29). I don't generally upload the same video twice but sometimes I can never get enough..

Picasso's family portraits at 976 Madison. On the third floor next door, if you missed Hauser and Wirth's recent presentation of Mike Kelley's Kandor series Venus has a similar show. H&W uptown has moved on to Kelley's Memory Wares, downtown they proffer Kelly chum Paul McCarthy in what appears to be a drive through dilapidated Orlando theme parks, and perhaps the best and most timely show in town: Guston's Nixon series (right) started soon after he switched to figuration.

Mr. Yau wants "to believe that this is the beginning of the art world’s real and enduring appreciation of Brenda Goodman’s hard-won achievement".. there's three of her canvases at 58 Bogart in Bushwick which inspired my own curiosity. Near there definitely make time - I think it runs 20 hours or so - for Ragnar Kjartansson's four channel adaptation of Halldór Laxness' World Light, which I hope to type more about.. also showing in DC til Jan 8 along with his video where the sings the line 'sorrow conquers happiness' over and over to a twelve piece jazz band (quite a good musical composition).
Posted by Ian Keenan at 7:15 PM 2 comments:

I have been offline.. 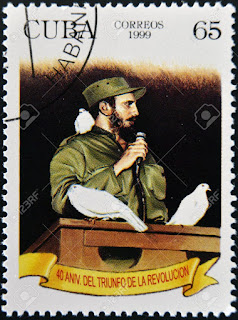 “..some people asked.. ‘Why didn’t they send a plane?’ 3:3 There are people incapable of understanding that some things can be done, and some things can’t be done. 3:4 There are things that are not real. 3:5 There are things that come from someone’s imagination. 3:6 In one’s imagination, I can take off and leave our planetary system, and roam around who-knows-where, in the infinity of space. 3:7 But that’s not possible in reality, at least not in the present time.”

Posted by Ian Keenan at 6:18 AM No comments: