The art critic Theophile Thoré correctly identified Manet's subject matter as rife with “borrowings and pastiches” of Velasquez, Goya, and El Greco, amid what he called the painter's “magical qualities.” Driven underground in 1848 by Cavaignac's provisional government, Thoré had resurfaced in '59 during Napoleon III's general amnesty to publish reviews under the name William Bürger, bringing the works of Vermeer and Hals from two centuries earlier to the attention of those outside Delft and Haarlem. Mindful of Manet's insecurities, Baudelaire struck back with a letter, lying through his teeth that Manet had never seen a Goya or an El Greco. Thoré, unconvinced, published the letter in Belgium, reiterating his praise of the painter: for all his borrowings he was the most original painter in Paris.

While pastiching the colors and subject matter of Iberia would produce in one critic such a minor qualification, pastiching the subject matter of Giorgione and Titian was, to the general art world, unforgivable, resulting in storms of insults and condemnations, deepening Manet's self-doubt and causing him to flee to Spain. This is no accident: the seeds of modernity cited in Baudelaire's essays on painting had already been sewn in the first decade of the 16th Century. 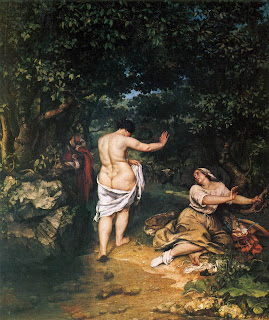 The events of the Paris Salon of 1863, in which 2800 canvases including those of Manet and Whistler were excluded, to be shown separately by Napoleon III's agreement in the Salon des Refusés, are often cited as the beginnings of Modernism. This rupture between the painters and the judges was set in motion a decade earlier by Courbet's The Bathers (above), which was removed from the 1853 Salon by the police and led to a change in the composition of the jury. The academic paintings of the Salon were full of nudes, but Courbet's pair was called “vulgar” by, amongst others, Delacroix for their body shape, pose and for being contemporary peasants rather than allegories of chastity and wisdom. In 1855, after Burial at Ornans and The Painter's Studio were rejected, Courbet set up an exhibition for himself across the street from the Salon, called "Realism." It was in 1855 that Baudelaire attacked Courbet's realist style: “the heroic sacrifice that Monsieur Ingres makes for the honor of tradition and Raphaelesque beauty, Courbet accomplishes in the interests of external, positive, immediate nature. They have different motives when waging war on the imagination, and the two opposing obsessions lead them to the same immolation.”

Several years later, Baudelaire wrote his seminal essay “The Painter of Modern Life,” in which he clarified his view of the dangers of separating the immediate and the Raphaelesque: “Beauty is made up of an eternal invariable element, whose quantity it is excessively difficult to determine, and of a relative, circumstantial element, which will be, if you like, whether severally or all at once, the age, its fashions, its morals, its emotions. Without the second element, which might be described as the amusing, enticing, appetizing icing on the divine cake, the first element would be beyond our powers of appreciation, neither adapted nor suitable to human nature. I defy anyone to point to a single scrap of beauty which does not contain these two elements.”

This essay wasn't published until November 1863, but had been written in early 1860, after which Baudelaire shopped it around a while. Manet valued Baudelaire's friendship, spent many hours with him, and the poet's opinions were an anchor against everything he chafed against, which inclined him to let his paintings be the embodiment of Baudelaire's theories. 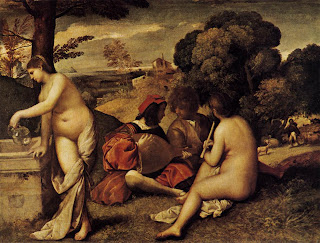 Not only did, in fact, Courbet portray eternal beauty, but it's possible that his 1855 The Bathers was influenced by The Pastoral Concert, the 1508 painting hanging in the Louvre that is currently attributed to Titian, as the Reubenesque figure on the left of The Bathers is involved with water and draped around the leg. The painting was then attributed to Giorgione, and although dissenting opinion at that time suggested Palma Vecchio, the Titian theory didn't come onto the scholarly radar until the 20th Century. The figures look like Titian's, but the content, figures not relating to mythology, and the enigmatic subtext show the profound influence of older master Giorgione. 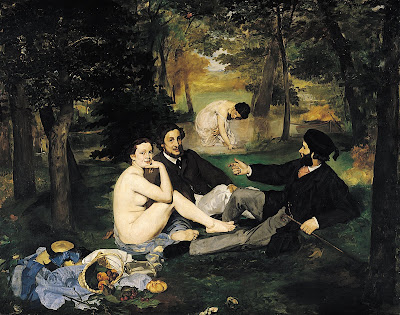 It's been stated frequently that when Manet, who rarely painted nudes, set out to produce one for the 1863 Salon, he used the situation of The Pastoral Concert with the figure poses of an engraving after Raphael's The Judgment of Paris. What isn't often noted is that the resulting canvas, Le déjeuner sur l'herbe, is the first intentional application of Baudelaire's credo, exemplified in advance by Titian and Giorgione. The two men in The Pastoral Concert are wearing contemporary clothing – one suggesting wealth, the other not - while the females – possibly present in the minds of the men - represent the eternal. The lute and the flute have represented the Appolonian and Dionysian opposition, with the flute being played here by a nymph and the lute by a scruffy male. 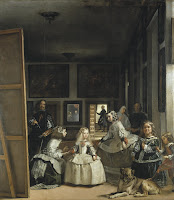 Manet, who has studied the painting enough to copy it, has replaced the nymph with the flute with a woman staring directly at the viewer, the model Victorine Meurent, herself a painter. I take this to suggest that the Dionysian function is being fulfilled by human observation, again in keeping with Baudelaire's theories. Nude women in traditional allegorical paintings of the Salon didn't look back at the viewer as Titian's Venus of Urbino did. As for Manet, whose early nudes (he only painted nine in his lifetime, most long afterward) stare at the viewer, let's recall that no one who pastiches Velasquez can ever wrest from their mind Las Meninas, where the Infanta Margarita stares back at the viewer, shown in the mirror to be the king and the queen. This representation of the viewer is an allegory of sight, since you, the viewer, are in fact standing in place of the king and the queen. Manet converts this allegory into a Dionysian function set forth by Baudelaire. 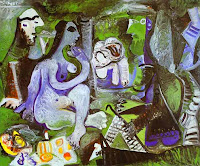 Picasso painted more pastiches of Le déjeuner sur l'herbe than any other painting. Las Meninas was another one he pastiched over and over, perhaps the runner up. He would spend 20 hours straight locked in his studio agonizing over these two paintings.

The angry reaction that Le déjeuner met from critics, the public, and some painters in 1863 is legendary; even Thoré called it “absurd.. inappropriate.. ugly.. and shocking” and the painter Jean-Léon Gérôme stipulated that his students not utter Manet's name. The legends can't reconcile why a knowing provocateur would be so emotionally shell-shocked by the reception he met, but I'm inclined to believe he was thrust into this role by Baudelaire and found the burden harrowing. This possibility is supported by the fact that Olympia, a nude in contemporary setting that created an even greater stir in the 1865 Salon, was painted before the 1864 Salon but not entered, and presumably entered the following year at Baudelaire's insistence.

In 1864 he entered two paintings: Incident in a Bull Ring and The Dead Christ With Angels (now at the NY Met), reverting to tried and true subject matter, which were immediately savaged by Theophile Gautier, leading to Manet destroying Incident. While Incident was a return to Goya, Dead Christ seems to me to be a return to Giorgione, who was near completion of a work of the same theme when he died, which was completed by Titian.

Olympia was accepted into the Salon of 1865 but the unprecedented critical vitriol and ridicule that met it is well documented. Again the figure stares the public in the face, and as people have guessed that the frog in Le déjeuner was a reference to prostitution, the name in the title was typically used in a brothel. Concurrent with Manet's discovery that Napoleon III was keeping a courtesan as a regular mistress, we have ourselves an interesting riff on Las Meninas, the courtesan taking the central position occupied by the princess to illustrate France under Napoleon III.

The influence of Titian's 1538 canvas Venus of Urbino (left) is universally acknowledged, but Titian's canvas is itself rooted in Giorgione's 1510 Venus Sleeping (below), which Titian is believed to have completed by filling in the landscape after Giorgione's death. The referencing of Venus Sleeping is illuminating: the physical ease, closed eyes, imperviousness to the exterior setting, and the gesture of the hand (which Twain complained upon seeing Urbino was masturbatory) contrasts with the penetrating stare, animated mood, social context, interior setting, and use of the hand to conceal the sex organ from the intruder in Olympia. Buddhists talk of the peace of closed eyes and wrath of open eyes, or Christ sleeping through the storm contrasted with his turning the tables at the Temple. Giorgione's Venus attempts to represent the mysteries of nature, while Olympia through Urbino uses the interior to explicate the man-made world, the psychology of class, transgression, and ambiguous interpersonal relations, emerging from an eternal eroticism. 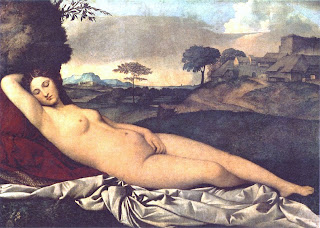 A Bar at the Folies-Bergère, painted by Manet two decades later, is believed to be another version of Las Meninas, again with the female staring at the viewer, and as with Le déjeuner and Olympia, the conventional belief that the woman in the painting is a prostitute. If Olympia was Napoleon's mistress looking back at the Emperor in the style of Velasquez, here the barmaid stares back at a bourgeois of the Third Republic setting up a paid tryst in bar that caters to ordinary male taste, perhaps intended in 1882 as an ironic celebration of the recent defeat of the monarchical restoration.

Though Michelangelo and Raphael were painting more famous works on the walls and ceilings of the Vatican at the time, I consider Giorgione's Sleeping Venus, 500 years old this year, to be the greatest exterior ever painted, and if it falls short of Las Meninas in the final round, it is perhaps only because the human mind is better suited to explore the dimensions of what it has built. Its pictorial qualities, most notably the color, are groundbreaking and infrequently exceeded, and its content contains not only the seeds of Manet's leap into modernity but the seeds of Surrealism.
Posted by Ian Keenan at 11:49 AM